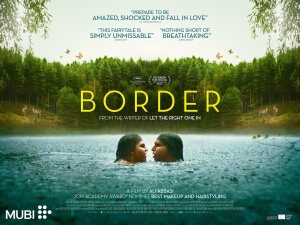 BASICALLY…: Tina (Melander), a facially-deformed customs officer with an unusual ability to sniff out guilt, meets a strange traveller (Milonoff) with a similar deformity, who reveals life-changing secrets about her…

For Valentine’s Day this year, while most couples were probably getting comfy on their sofas as they prepared to watch a sweet romantic-comedy, I was watching a Swedish movie featuring two overweight and ugly characters frolicking around the woods together completely stark naked, whilst also dealing with topics such as eating a wide variety of insects and extreme child pornography.

While on paper it sounds about as romantic as a trip to Auschwitz, Border is surprisingly a very sweet film that isn’t afraid to go dark and surreal but is even less afraid to be a healthy mix of adult fairy tale and grounded human drama.

Our main character is Tina (Eva Melander), a woman whose less than appealing facial features and body image don’t exactly give her the biggest boost of confidence in the world, nor does her neglectful live-in boyfriend Roland (Jörgen Thorsson) who’s more interested in his dogs than her. However, she also has the unusual ability to sniff out guilt and shame in people, which especially comes in handy at her job as a customs officer at the Swedish border; it is through this job that she comes across Vore (Eero Milonoff), a mysterious traveller who looks very much like she does, and as they start to become close he helps her discover things about herself that she had never even considered were possible – and that’s honestly where I want to leave things, because this is the kind of movie that is best experienced with as little knowledge about it prior to seeing it as possible (in other words, stay away from its spoiler-heavy Wikipedia page).

While this film and the one I’m about to compare it to are practically night and day next to each other, as I was watching this movie I couldn’t help but think of Pan’s Labyrinth, which also adopted a very poetic fairy tale tone while also setting it against a very bleak real-world backdrop; the difference being that Border keeps its footing firmly in reality a little more than Guillermo del Toro’s movie does, but it’s no less fascinating to sit through, if only to see how strange and unexpected the turns it was taking were going to end up being. It’s adapted from a short story by John Ajvide Lindqvist, who wrote the novel that was itself later adapted into Let The Right One In, and it’s certainly apparent that this came from the same mind as that story because of how its fantastical elements blend almost seamlessly into the arguably darker contexts of the real world. Here, the emphasis is largely on the spiritual journey that its lead character undertakes, as led by this mysterious stranger who holds very lucrative information about her own origins, and how she eventually becomes more comfortable about herself than ever before while also dealing with her place in a world where she physically just cannot blend into.

The film’s two lead actors, Eva Melander and Eero Milonoff, are both uniformly excellent, but their outstanding nature extends way beyond their strong performances; both were subject to about four hours’ worth of heavy make-up and prosthetics every day of shooting, and before then they each had to gain a significant amount of weight in order to physically inhabit these characters, which speaks at high volumes about their utter commitment to their parts if they’re willing to go that kind of distance to play them. These are the sorts of roles that require actors with very little vanity to just jump right into without hesitation, and they are able to not only show no signs of reservation in some of the wild and crazy things they are shown doing here – including a sex scene that is so bizarre and unconventional that it needs to be seen to be believed – so hats off to both of them for doing exceptional work with so many layers (figuratively and literally) they had to work with. Incidentally, the make-up team for this, which has rightfully been nominated for an Oscar this year – and will have the misfortune of having their moment in the spotlight nixed from the upcoming telecast; “thanks”, Academy – also deserves high praise for creating very real-looking and uncanny prosthetics that match perfectly with the mixture of realism and fantasy that this movie is going for; it’s fantastic work by them, and the actors who had to collaborate with them consistently during shooting wear their work proudly all across their bodies.

It’s such a unique and fascinatingly told story, which takes very unexpected turns and even dives into some very disturbing real-world territory, that it honestly makes me a little concerned that it will eventually be remade for American audiences, kind of like how Let The Right One In was also adapted into Let Me In. It concerns me because Border feels very much like a European film, and by that I mean it has certain characteristics and ways of thinking that are very unlike a lot of other Western storytelling, so for an American remake to happen they would have to sacrifice a lot of the film’s weirdness to make it more “accessible” to audiences, which would kind of take away one of its key elements that help make it stand out as much. The scary thing is, I can see this easily becoming a reality, including getting someone like Melissa McCarthy to play the Tina character and having them play up the fantastical elements largely for laughs; I feel like that would be extremely wrong, because this film does feel so genuine and unique that to strip it of part of its identity would go against the very ideas that the movie set out to accomplish.

Until that frightful day comes, we at least have the original movie to leave us fascinated and bewildered all at the same time.

Border is a fascinatingly unique Swedish fairy tale mixed with a dark sense of reality, but it’s also not afraid to be very sweet and character-driven, especially through two wonderful performances by Eva Melander and Eero Milonoff under some extremely impressive make-up.