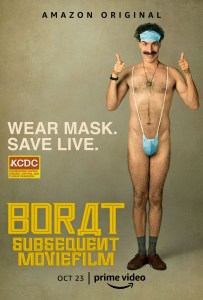 BASICALLY…: Kazakh reporter Borat Sagdiyev (Cohen) returns to America to discover more about its culture amidst the backdrop of the COVID-19 pandemic and the 2020 election…

Of all the countries in the world right now, America feels like it’s the most on fire (sometimes literally). As of writing, the country is less than two weeks away from a vital election that will determine the direction of its policies for generations to come, and all during a global pandemic that has seen more than 200,000 Americans die, the highest death toll of any nation. The divide between conservatives and liberals is sharper than ever, with a disturbing rise in far-right activism paralleled with those peacefully protesting for social and progressive reform, with old topics such as racism and basic healthcare still being hotly debated when the issues should have been solved by now. In short, America is more fragile than ever before.

Time, then, for a familiar face to show back up and place his foot on the porcelain.

Sacha Baron Cohen returns as Kazakhstani reporter Borat Sagdiyev for the first time since his first film debuted fourteen years ago, which at the time exposed casual prejudices and wayward attitudes amongst Americans towards everything from women to black people to the Jews and anything else you can think of. For his 2020 return, though, things are considerably different: what can someone like Borat expose in 2020 America, where nothing seems to matter regardless what anyone, even those in power, says or does anymore? As it turns out, there’s plenty for him to still uncover, in a sequel that just about matches the first in terms of outrageousness, and remains just as hilarious as we remember the 2006 movie being.

In Borat Subsequent Moviefilm: Delivery of Prodigious Bribe to American Regime for Make Benefit Once Glorious Nation of Kazakhstan (to use its full title), we learn that the titular reporter has fallen on hard times; he’s been sent to a gulag for bringing shame to his country following the release of his previous film, everybody in the country now hates him, and even his own family has disowned him – except for his fifteen-year-old daughter Tutar (Maria Bakalova) who, in typical Kazakh fashion, has been tied up in her cage this whole time. Borat is released, however, when the Kazakh government wants him to deliver a gift to American Vice-President Mike Pence, and is sent to America to fulfil his mission or else be executed upon his return; except, Tutar has managed to find her way to the country as well, and so both father and daughter must become accustomed to American traditions if they are to accomplish their mission.

Cohen and director Jason Woliner – the latter filling in for the previous film’s director Larry Charles – filmed the movie in secret over the last year, incorporating new disguises to stop Cohen from being recognised whilst in-character; not that it matters, because there are plenty of scenes where Cohen is simply Borat and everyone seems to be unaware of who he really is. Regardless, Cohen’s ability to both shock and surprise remains strong, proving that even in a post-Grimsby world the comedian still knows how to make intelligent comedy out of saying the most horrific things; for example, there’s a whole sequence where Borat and his daughter visit a woman’s clinic, where they miscommunicate some facts in front of the deeply religious doctor that they’re seeing, and while the scene is filled with plenty of double entendres and inappropriate language (most of it hilariously juvenile), what’s even funnier is the real-life doctor who overlooks some very alarming hints of incest being brought up and instead brings it around to his anti-abortion beliefs, even saying out loud that the circumstances do not matter. It’s a very well-executed bit of comedy because it exposes how deeply twisted some people can be when it comes to their distinct views on things like women’s health, to a point where more serious issues are all but dismissed since, in their mind, what has ticked their boxes is the fact that they’re talking about something he personally doesn’t agree with – all while being extremely funny, even when the doctor himself doesn’t realise it.

There’s plenty of scenes like this throughout the film where, just like in the first film, Borat goes around interviewing several people who blindly go along with practically everything he says or does, whether it’s looking up porn in a tech store or asking a baker to write the far-right chant “Jews will not replace us” on a cake. What was perhaps shocking about this method of undercover filmmaking in 2006 is somehow even more so fourteen years on; in that time, American people’s attitudes do not seem to have changed, and may have actually gotten worse under certain political leaders – some of whom appear in this film without their knowledge – who appear to have stoked the fires of hatred for the last four years. A character like Borat, with his ignorant views on women, minorities and religions, can easily slot into today’s America like a Tetris piece, and what Cohen does here that’s quite profound is that he is able to keep prodding at the surface of the numerous people he encounters until not one, but several juicy titbits come tumbling out all at once; at one point, Borat shacks up with two conspiracy theorists who continuously spout insane beliefs that it was the Clintons who were responsible for unleashing COVID-19 upon the world, and their craziness doesn’t stop there. It’s wildly funny material for Cohen to exploit, but at the same time it paints a very ugly picture of what parts of America are like today, which has been blanketed so poorly that it takes a fake Kazakh journalist with a bushy moustache to pull it down.

The film has many outrageous set-pieces which are bound to horrify and amuse at the same time, whether it’s perhaps the bloodiest father-daughter dance of all time, or the much-reported climax featuring a certain key figure in current politics (having now seen that footage, there’s no way to excuse what he’s doing when it’s so blatantly obvious). The majority of it strikes at least a few solid chuckles, with both Cohen and game newcomer Maria Bakalova actively going all-out to do things no other person would dream of doing, and while the odd skit feels a little derivative of stuff we’d previously seen in the last Borat movie, this is a solid comedy sequel that feels fresh and wildly necessary for these uncertain times.

Hopefully, though, we won’t need Borat to show up again another fourteen years from now to expose even more societal flaws.

Borat Subsequent Moviefilm: Delivery of Prodigious Bribe to American Regime for Make Benefit Once Glorious Nation of Kazakhstan is a return to form for Sacha Baron Cohen, who revives his Kazakhstani reporter character for another hilarious, outrageous, and all too telling examination of American ideologies in 2020, which the comedian exposes in reliably shocking and dangerously funny fashion.