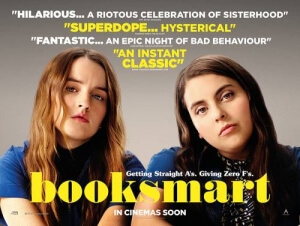 BASICALLY…: On the eve of their high school graduation, academic superstars and best friends Amy (Dever) and Molly (Feldstein) set out to cram all the fun they missed out on during the last few years into one night…

I’m surprised, and a little disappointed, that we haven’t had a movie quite like Booksmart already; sure, when you break down the plot it’s nothing entirely new – comparisons to Superbad are easy, but accurate – but the way in which it’s told, with such a frankness about modern teen culture, an overwhelming acceptance of everyone of all sexes, races and sexualities, and a style that’s not only heavily ambitious but extremely confident with no miscalculations to speak of, it’s something of a teen movie miracle.

Olivia Wilde’s directorial debut is truly something special, as it’s not only an absolutely hilarious movie with the vast majority of its jokes hitting all the bullseyes, but unlike a lot of other teen movies about partying, sex, drugs and general debauchery, Booksmart feels like it has something new to add to the conversation, opening up several possibilities to a whole new audience who can see themselves having as much fun as the two main characters.

Those would be Amy and Molly (Kaitlyn Dever and Beanie Feldstein respectively), two over-achieving high school students and best friends who are one day away from graduation. For the entirety of their school life, they’ve been busy studying their butts off to secure places at their colleges of choice, and it seems to have paid off – until Molly discovers that their peers also got into some pretty good colleges, despite seeming dumber and more fun-loving than they are. Realising that she may have let her and Amy’s lives thus far gone to waste, she convinces her companion to go out to a party that night and have all the fun they missed out on over the last few years; thus begins a riotous series of misadventures, involving everything from boat parties, murder mysteries, unexpected encounters, and so much more.

I really don’t want to go into too much detail here, because some of the things that happen in this film are extremely unpredictable and I want to preserve that experience for you to see with your own eyes; all you need to know that right from the word “go” this is a stealthy, highly enjoyable and extremely funny journey that brilliantly plays with any expectations you may have all the way through. The sheer unpredictability of it adds more to the film’s overwhelmingly funny gag ratio; there are times during this that I laughed so hard I genuinely thought I was going to be ejected from the auditorium, and all because things happened that I never would have imagined seeing in a film of this particular genre, with perfect delivery from the cast and swift, sometimes gorgeous, direction by Wilde who knows exactly what she’s doing in her very first stint behind the camera. Set your expectations for this movie at the door, because it’s more than likely you won’t be able to guess some of the things that happen here.

It’s a movie that hits a lot of topics that most youths nowadays can easily identify with, but not once does it come across as cynical or like a much older person’s idea of what a millennial is really like. Instead, this script really feels authentic and matter-of-fact when discussing issues such as sexuality – Amy, for example, is openly gay but lacks the experience or confidence to talk to the girl she fancies – and portraying most of these young people as accepting, open-minded people who like to have fun but also don’t want to miss out on their potential futures. That’s the reality which Molly struggles to comprehend in this movie, and it leads to a nice message for young people about learning to let loose every now and then, because contrary to what some people may think it actually is possible to balance academic studies with living your life, which I feel is a fresh and even healthy outlook that not many other teen movies really seem to understand.

As fresh, funny and stunningly made as it is, Wilde’s film really would have fallen apart if she didn’t find the right people to lead it, and in both Kaitlyn Dever and Beanie Feldstein she has found two extremely charismatic souls to guide us through one hell of an entertaining journey. Their chemistry is impeccable, flawless, and downright adorable; you’ll wish you had a friendship as strong as theirs, because even at their lowest moments you can tell these are two people that clearly care about one another, and they succeed at being both amusing and extremely heartfelt as a direct result. The two of them easily carry this movie on their collective shoulders, although giving them a strong run for their money is Billie Lourd as perhaps the most insane party animal you could possibly encounter, in a role that the actress is clearly having the absolute time of her life playing and just about steals each and every one of her scenes with. The film, though, comes right back around to Dever and Feldstein, and their pairing is a strong enough incentive to keep on going with this film, because their heart and enthusiasm is irresistible.

As far as teen movies of this raunchy tone go, it’s certainly one of the better ones to have come out in recent years, and by far and away one of the funniest; it’s a film I can easily see achieve a cult following in the years to come, but rather than let it gain its audience over time Booksmart deserves an audience right away, because it’s a special movie that will have you wishing you were a teen once more, just so you can experience the youthful energy that’s all over this flick.

Booksmart is a tremendously fresh spin on the Superbad formula that stands extremely well on its own, with impressive first-time direction from Olivia Wilde, an extremely high laugh count, healthy representations of today’s youth, and two very charismatic lead performances that push it far beyond the standards of the teen movie genre.

Check out Booksmart showtimes in London
on Walloh.