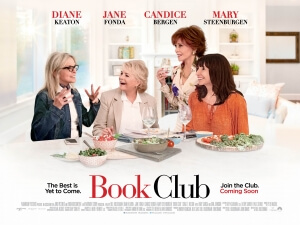 BASICALLY…: A group of lifelong friends (Keaton, Fonda, Bergen, Steenburgen) find their passions rekindled when they start reading Fifty Shades of Grey for their book club…

On an early episode of Adult Swim’s stop-motion sketch show Robot Chicken, there was a humorous mash-up of The Golden Girls and Sex and the City, where the joke was basically that these four old women were about as promiscuous and sex-crazed as Carrie and her quartet, to the horror and disgust of other people around them.

While Book Club probably isn’t quite as crass or demeaning to old-age intimacy as that sketch was, it still plays out as a less amusing and much, much tamer version of that two-and-a-half minute sketch, but while it’s certainly got plenty of cringeworthy innuendoes and other embarrassing clichéd scenarios that fail to leave its talented ensemble with much dignity, said ensemble is still strong and talented enough to not necessarily overcome its heavy flaws but make it a far more comfortable sit than anyone would probably anticipate.

The book club of the title is comprised of four lifelong friends; Vivian (Jane Fonda), a successful businesswoman who struggles to form a meaningful relationship outside of casual sex; Diane (Keaton), a widower who is being pressured by her controlling grown children to move out with them from Los Angeles to Arizona; Sharon (Candice Bergen), a court judge who is struggling to cope with the fact that her ex-husband is now shacked up with a much younger woman; and Carol (Mary Steenburgen), a chef whose romantic life with her husband (Craig T. Nelson) has gone severely downhill over the years. At their next meeting, Vivian gives them all copies of EL James’ Fifty Shades of Grey to read, which at first they reluctantly do, but after reading it they soon find themselves inspired to take control of their own love lives. For instance, Vivian begins seeing old flame Arthur (Don Johnson), Diane gets cosy with handsome and wealthy pilot Mitchell (Andy García), Candice sets up an online dating profile (including a very unsubtle product placement for real dating app Bumble), and Carol attempts to spice up her marriage despite the fact that her husband is having almost none of it.

The trailer for this movie really puts the focus on the role that Fifty Shades of Grey apparently plays here, which seems to give off the idea that the book is somehow inspiring these women to get a lot kinkier in their old age, but really the book itself is brought up sparingly over small parts of the film, and acts only as the catalyst for them to embrace their autumn-years sexuality. You can certainly say that this movie is a mere commercial for the Fifty Shades books, but when you compare it to how horrendously a film like The Internship bases its entire reason for being around advertising Google, suddenly it doesn’t seem as shockingly inept or blatant. So, while the trailer definitely suggests that this is a movie where the book plays a central role, in a way it does but not quite as extreme as the promos would have you think.

That being said, this is still a pretty uncomfortable embarrassment of a film, with a script which is filled with sitcom-level sexual innuendoes and tired clichéd plots that often go nowhere or end in places that are far from satisfactory. This is the kind of movie where a character is reading Fifty Shades of Grey whilst watering their plants, and when they seemingly get to a rather steamy sentence, there will be a shot of a water thermometer arrow swinging straight over to “moist”. If you didn’t roll your eyes at that one, how about the scene where Candice Bergen takes her cat to the vet, who tells her that she has a “lethargic pussy”, or a scene with a motorcycle that gives you exactly the very first pun you’re thinking of in your mind? The script is packed to the brim with lazy and groaning innuendoes like these, not to mention several instances of terrible sitcom gags about slipping Viagra into someone’s drink or accidentally taking an unflattering profile picture for their online dating page, and it’s all so tame and chaste that you wonder why it was Fifty Shades of Grey they chose for the central book because they never set out to do anything as raunchy or alluring as what’s suggested on those pages (although, having seen all three Fifty Shades movies, I’m kind of glad that this movie didn’t go that route).

It’s definitely not a movie I would recommend to anyone, nor would I ever have the will to ever watch it again, but what keeps it from being a truly wasteful experience – other than the fact that the last comedy I watched was Life of the Party, which this movie may as well be Animal House in comparison to that unholy abomination – is that this cast is so good, and they are legitimately trying even with this material that doesn’t do them many favours. Fonda, Keaton, Bergen and Steenburgen do have a nice chemistry with each other, and all four of them are such good actors that they can easily make something out of thinly written characters such as these, even scoring a slight chuckle every once in a while just from their decent comradery alone. Other veterans like Craig T. Nelson, Richard Dreyfuss and Don Johnson – who in an ironic twist is the real-life father of Dakota Johnson, who of course played Anastasia Steele in the Fifty Shades movies – all do fine even when most of the time they’re undermined by the lazy material, but again these are all such strong actors that they can charm their way out of a plastic bag if they were forced to – and seeing how that thought alone is more entertaining than the movie itself, I wouldn’t mind seeing them try to do exactly that.

I guess for the most part it’s harmless fluff, but Book Club is just another one of those films that was made for a specific audience (i.e. not me) and panders to them so much that you will definitely need restraints, but not in the bedroom.

Book Club largely underutilises its talented cast, despite their best efforts, in a film that heavily favours cringeworthy sexual innuendoes and tired sitcom plots and gags that fail to leave anyone with a shred of dignity.