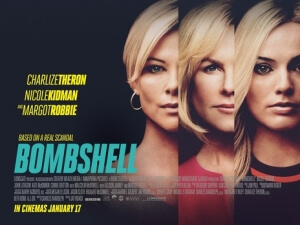 As the first major film to be made about sexual harassment post-#MeToo, Bombshell has a lot riding on its shoulders. Not only is there a massive responsibility to document the events as efficiently and as truthfully as possible, but there is also a great importance to acknowledge how this particular episode – which would eventually lead to the termination of Fox News CEO Roger Ailes, a powerful figure in both conservative media and the entire media industry as a whole – is a major milestone in the fight against harassment in the workplace, especially within an industry where it has been highlighted the most.

Though it perhaps lacks the real depth a topic like this deserves, when it comes to showing a digestible account of Ailes’ downfall amidst the toxic environment of Fox News, Bombshell does the job well enough.

The movie has three focal points; news anchor Megyn Kelly (Charlize Theron, under heavy make-up that makes her a dead ringer for the real Megyn Kelly) as she finds her public image tarnished by the consistent criticisms of then-Presidential candidate Donald Trump as well as the disagreeable environment in which she works; ousted show host Gretchen Carlson (Nicole Kidman), who endures repeated sexism from her male colleagues both on and off the air, leading her to instigate the lawsuit that would soon take down Ailes (John Lithgow); and fresh-faced producer Kayla (Margot Robbie), a fictional composite character who witnesses first-hand the uncomfortable nature of which Ailes and his associates treat their female staff. All three women end up playing a part in Ailes’ eventual fall from grace, but not without heavy scrutiny from not just their predominantly male counterparts but also the overly conservative cloud which hangs over Fox News and the nationwide audience that it reaches.

Right away, you detect a certain tone and style to this movie that isn’t dissimilar to something like The Big Short – whose co-writer, Charles Randolph, provided the screenplay for Bombshell – where it’s taking a slightly more playful approach to the heavy topic, with characters addressing the camera directly and certain complicated procedures surrounding the topic at play being explained in simple gestures, even incorporating Margot Robbie in there somewhere as The Big Short cheekily did. While it’s a reliable style to work with, director Jay Roach’s use of it is somewhat inconsistent; sometimes, the movie will address the audience to fill them in on what’s going on, but then the movie completely forgets that there ever was a broken fourth-wall and just becomes a full-on dramatization, which throws you off for a moment because it really felt like they were establishing a voice that somehow never fully develops. The same goes for the content itself; despite the weight of the situation, the film rarely makes you feel how heavy it is, largely offering things at face value instead of digging a little deeper beneath the surface. You don’t entirely feel the severity of the scandal, much like how a film like Spotlight was brilliantly able to do, because not a lot of time is spent investigating the sheer damage that Ailes’ harassment has left on many of his female accusers; instead, we are just expected to accept things as we see them, and explore the facts just as they are presented to us. It’s an air-head of a movie in that regard, one that certainly has a number of things on its mind, but has a rather flimsy way of getting them across.

The performances, however, save the film from becoming a well-intentioned dive into mediocrity. Much has been made about Charlize Theron’s remarkable physical transformation into Megyn Kelly, not just with the make-up but also how she vocally matches Kelly’s own speaking patterns, and she is uncanny in the role, a force of nature that further solidifies Theron’s powerful skills as a performer, even under heavy prosthetics. Nicole Kidman is great as always, as is Margot Robbie in probably the most sympathetic role of the three leads, though special mention goes to both John Lithgow as a menacing and leering Roger Ailes, and Kate McKinnon as a closet liberal that Robbie’s character befriends at work. It’s a strong ensemble, made up of small parts by familiar faces who are more or less dead ringers for their real-life counterparts, from Malcolm McDowell as Rupert Murdoch to Kevin Dorff as Bill O’Reilly, and they all have the weight of their performances to carry the film towards a reasonable finish line.

As it stands, this is not the definitive movie about sexual harassment in a media work environment – it’s perhaps a little too flimsy for its own good – but just like the real scandal it’s based on, it won’t be the last word on it either.

Bombshell tackles the real-life sexual harassment scandal that led to the termination of Fox News CEO Roger Ailes in a way that’s not quite as innovative as something like The Big Short, with an inconsistent style that’s flimsily executed, but has enough strong performances from an excellent ensemble to keep itself afloat long enough towards a meaningful conclusion.

Want to decide what the movie’s like for yourself?
Check out Bombshell showtimes in London
via