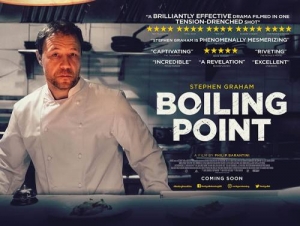 BASICALLY…: At a busy London restaurant, the head chef (Graham) finds himself under constant pressure…

For anyone who has ever worked in, or is currently working in, the vast hospitality sector from restaurants to bars, fair warning: Boiling Point may trigger some rough Vietnam-style flashbacks.

Like many young people just out of university, I had the misfortune of working stressful hours in a busy restaurant just to make ends meet, only to discover the painful truth that working constantly to catch up with the incessant demands of customers, cleaning regulations, and the meticulous expectations of managers was, to use the understatement to end them all, a tad stressful. It is a never-ending cycle of exhaustion, frustration and desperation that filmmaker Philip Barantini captures all too well in his ambitious one-take drama, where every single slip-up is shown in painful real-time with no apparent edits, just to allow all the pressure to fold on top of one another at once.

Boiling Point takes place over the course of one night at a busy London restaurant, where head chef Andy (Stephen Graham) is already facing enormous pressure before the doors have even opened on what is being anticipated as the busiest night of the year. Moments after he’s arrived, he’s been slapped with a disastrously low grade from the health inspector, mainly because he’s failed to keep a consistent log of clean-up duties, which he then takes out on some of the fresher faces in his kitchen. Things only escalate when the restaurant opens for the evening, as Andy and his staff all face one situation after another from rude customers to incompetent staff to obnoxious Instagram influencers asking for food that isn’t even on the menu, to the appearance of popular TV chef and Andy’s former partner Alastair (Jason Flemyng) who has his own reasons for being there this particular evening. All the while, Andy tries his damnedest to keep it all together, until things inevitably start to crumble around him.

As someone who did indeed work in this kind of restaurant environment, you have no idea how painfully accurate so much of this movie feels. It portrays certain situations so realistically that sometimes I had to look away from the screen because it felt too real; the neglectful waiting staff, the argumentative customers, the orders that keep piling up on one another, and almost everything else about this movie feels meticulously researched and lived-in, as though it was made by people who – like myself – had previously existed within this relentless cycle and recounted some of their most traumatising experiences in this already difficult-to-watch (but in a compelling sense) 94-minute ride. By keeping things contained within its one-take cinematography, Boiling Point rather ingeniously keeps the illusion of something important happening within every corner of the frame, even when it may not be as significant as what we’re meant to be focusing on. We may be with Stephen Graham and Vinette Robinson in the kitchen, but we can also faintly see a waiter being scolded by the younger and rather useless manager; same whenever Graham’s Andy pays Jason Flemyng’s Alastair a visit at his table, as we can just about make out Robinson struggling with something back in the kitchen. It’s impressively staged by director Philip Barantini, and shot with airtight precision by cinematographer Matthew Lewis who takes us to every gritty part of this fancy restaurant from the character-less bathrooms all the way to the bins out by the back exit.

To consistently act a certain level of stressed at all times with zero apparent breaks is nothing short of a Herculean effort, and Stephen Graham alongside a heavily infused ensemble cast deliver some exceptionally naturalistic performances that further highlight the intense pressure being applied to them at all times. A number of Graham’s Gordon Ramsay-esque outbursts are clearly out of genuine frustration rather than designed to be a pastiche of the celebrity chef’s famous demeanour, which the actor is smart enough to not lean too much into as we follow his flawed but still dedicated protagonist through culinary hell. Holding their own opposite the likes of Graham is Vinette Robinson, who has a number of neatly-delivered monologues that are eerily relatable to anyone who, like her character, is sick to death of the enormous pressure being applied to her from all corners. Overall, there isn’t a performance here that feels out of place or belonging to a much different story, as you can instantly recognise many of the personalities on display from the bitter chef to the inconsiderate kitchen porter, all of whom have something to contribute as the night plods on until, inevitably, things finally boil over.

It’s this final section of Boiling Point where things perhaps get a bit too dramatic for their own good. Without spoilers, there’s a major incident that calls into question the integrity of both the restaurant and Andy himself, which plays out like a literal kitchen-sink drama and threatens to undo some of the naturalism that the film had done so well to achieve by this point. There is still some great acting and tense cinematography covering it all in one go, but it seems like the filmmakers were simply looking for the most dramatic scenario to close on which, for something which was already doing perfectly fine just being a natural piling up of one rotten thing after another, feels a bit, erm, overcooked. The final few moments of the film especially feel like one step too far, suggesting a lack of redemption for characters who legitimately seek it, and denying them the chance to make things right in favour of a much more shocking conclusion.

Other than that, Boiling Point is an impressive slice of filmmaking that near-perfectly captures the hostility of working within the hospitality sector, filled with a bunch of excellent performances and firm, gritty cinematography that only further leaves you traumatised, even if you’ve never worked in a kitchen your entire life.

Boiling Point is an intense and impressively made one-shot kitchen drama that near-perfectly highlights the stresses of working within a busy restaurant environment, with excellent performances across the board neatly capturing the growing frustration, although the final section gets a bit too dramatic for its own good.

Boiling Point is now showing in cinemas nationwide – click here to find a screening near you!

It is also available to rent/buy on digital platforms, including Amazon Prime Video.