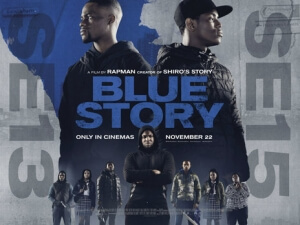 Before I get into what I think about this film, I have to acknowledge the audience that I saw it with at this particular screening, and their extraordinarily euphoric response. Never before have I seen an audience engage this hard with a movie; no joke, there were times when their laughter, cheering, gasping etc was so loud and passionate that bits of dialogue in the next scene could not be heard, and their response kept going for several more seconds after the fact. This is the kind of audience reaction you’d expect from something like Avengers: Endgame, or even one of the Twilight films (though this experience was nothing like the constant shrieking I endured at one of those movies), one that’s from people so passionate about the story that they’d applaud for anything that would walk into the frame.

It just goes to show how much a film like Blue Story being shown on the big screen means to this particular community, because it is rare for a movie with such hard-hitting topics such as gang violence told by a predominantly black cast and crew to be on nearly as many screens as Frozen 2, let alone obtaining a wide theatrical release at all. From that aspect, it’s completely understandable why an audience such as this would react to it the same way that I probably would at a Marvel or Star Wars movie; as for the movie itself, it’s a pretty solid flick that I can see achieving a wider status amongst various cinemagoers.

The film marks the feature writing and directing debut of Andrew Onwubolu, who you might know better as Rapman and as the creator of hit YouTube series Shiro’s Story; this is a much more personal project for the artist, as it takes inspiration from several aspects of his own life, specifically a number of postcode wars between gangs that he grew up around. The film’s focus is on two young teens, Timmy (Stephen Odubola) and Marco (Micheal Ward), who are best friends despite different backgrounds; while Marco is cocky, confident and charismatic, Timmy is a bit more reserved and sensitive. They also, however, hail from two differing, and warring, SE postcodes, and it’s not long before they both feel the violent consequences of happening to be from an area like Peckham – and soon, after a devastating tragedy, both friends are destined to become enemies as the gang war escalates.

Rapman – who also narrates the film through his trademark spitting of rhymes, more often than not acting as his own Greek chorus – takes a Shakespearian approach to this kind of film, and in doing so he immediately sets his film apart from other mainstream British films depicting black youth culture like Kidulthood or Ill Manors, because this one feels a hell of a lot grander. You can feel the passion that’s been put into bringing this story to the screen – and if not, the audience will certainly make you feel it – because it is something that he clearly holds dear having experienced much of it himself, and it’s the kind of movie you can tell was made by somebody who lived through most of it. He brings a real authenticity to the grimy world of gang culture he depicts here, with every main character – no matter how larger-than-life or overly dramatized they may be – feeling like someone who could actually exist in reality, which makes all the drama that they go through all the more harrowing. It is a thoughtful piece by an artist that has plenty to say about his surroundings, and has gotten the word out in a film that encompasses powerful and timely themes in a way that feels all too true.

It’s certainly not the most subtle film in the world, nor is it one that fully transcends its low-budget origins – certain plot points are simply explained to us, or rapped to us, rather than shown – but the point of this film isn’t to have the final say on the topic of gang violence. It is there to provide audiences with a different perspective on things, to give a voice to people that mainstream media would largely neglect, and to offer as real a glimpse into life in these rough London suburbs as you can possibly get. In that regard, what Rapman has done by not only telling this story but having it screen in so many cinemas nationwide is extraordinarily noble; here is something that would have easily slipped into obscurity had it been handed to a distributor who could not care less about representation, but through his passionate filmmaking and ability to tell a story that’s as tough to stomach as it is crowd-pleasing at times (and let me tell you, the crowd I saw this movie with was more than pleased) he’s secured a platform with which he can bring such a real depiction of this area of life to as many properties as possible, potentially inspiring other storytellers from similar backgrounds to break out and tell their own tales of life in and around their hostile environments.

Hopefully the movie does well enough to warrant such a response from not just audiences but also major film companies, who could recognise the success of this film as a sign that viewers want more diverse stories and potentially give voices to many other budding stoytellers that have tales of their own to share. The movie works well enough to stand on its own as a decent crime drama, but the potential impact it could make is incredibly important, and if luck is on his side then this will not be the last time that Rapman steps behind the camera. It will certainly be interesting to see what he does next, and how.

Blue Story is a hard-hitting crime drama that writer-director Rapman brings a real authenticity and Shakespearian grandness to, making it not only a pretty solid debut film for the artist, but also a potentially important milestone in diverse storytelling should this movie do well with audiences.

Want to decide what the movie’s like for yourself?
Check out Blue Story showtimes in London
via