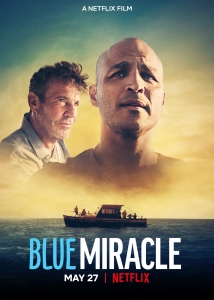 BASICALLY…: To save their home from being demolished, a guardian (Gonzales) and his young orphans compete in a fishing competition…

If there is one thing to praise Blue Miracle for, it’s that it does a pretty great job of being exactly the kind of movie you think it’s going to be. It is the epitome of inspirational, feel-good sports dramas, from the underdog lead competitors to the grouchy instructor that leads them to success, and it hits just about every emotional note you’d expect a movie like this to hit, without fail or even the slightest hint of hinderance.

It’s one thing to point out when a movie is going so hard with its clichés and not deviating from the set road map, but the far more important factor to consider is, simply, does it do them well? In that sense, Blue Miracle does have exceptionally good intentions, not to mention a couple of lively central performances and some rather beautiful cinematography, but beyond that there’s not much to say about it other than it’s wholesome and watchable enough, but obviously won’t be winning any awards for originality in the near future.

As most of these types of movies seem to be, this one is based on the real events surrounding the occupants of Casa Hogar, an orphanage in Cabo San Lucas, Mexico which, in 2014, is facing potential foreclosure due to financial issues, while a devastating storm which floods the building doesn’t exactly help matters either. The orphanage’s lead guardian, a humble man known to the many orphans as “Papa Omar” (Jimmy Gonzales), is faced with a difficult situation, until hope comes a-knocking in the guise of the local fishing tournament, which out of desperation (caused by the storm turning away international competitors) has waived its pricey entrance fee for local fishermen. This attracts “gringo” Captain Wade (Dennis Quaid, who is Harrison Ford-ing the hell out of his performance here), a washed-up former champion whose only hope of entering the competition is to bring on-board a local crew, which so happens to be Papa Omar and a handful of his “least annoying orphans” despite none of them having ever fished before in their lives. Under the reluctant guidance of Captain Wade, Omar and his boys set out to catch the winning marlin and inevitably save the day.

With all of its family-friendly tone and the endless amount of tropes for this sort of movie, the most surprising thing about Blue Miracle is that it ended up on Netflix and not Disney+. This really does seem like the kind of film that Disney would have made and released five or so years ago, because it carries a similar vibe that the studio’s other sports movies like The Mighty Ducks and Cool Runnings had back in the 90s, and had carried on in recent years with less memorable ones such as Secretariat and Queen of Katwe. You have so many of the usual ingredients with this film as well that it’s hard to know where to even begin; there’s the well-meaning establishment that’s in danger of foreclosure, the wise and almost saint-like hero whose personality revolves entirely around protecting the people he cares about, the young kid characters who range from sullen to wisecracking to just plain cutesy, the grumpy old mentor who’s got his own share of demons, and honestly if I continued just listing the familiar things that this movie does, then half of this review would be gone. The film hits all of these beats without a self-aware bone in its body, which in a way adds a sense of genuineness to the overall intentions of the writers and director, but also make sure that it doesn’t amount to anything other than a standard interpretation of these endless clichés.

There are, however, some unique fishing spots in this endless sea of familiarity. It does have some rather stunning digital cinematography which captures the beautiful pink sunsets and glossed-up depictions of tough street life in this Mexico town in ways that are certainly pleasing to the eye. There are also some fun performances from Jimmy Gonzales, who delivers a likeable turn that shows the actor’s ability to generate some strong screen presence, and especially the ever-entertaining Dennis Quaid who, in typical Dennis Quaid fashion, completely throws himself into the part where he gets to be amazingly over-the-top in parts, and ends up being the most enjoyable part of the entire thing.

However, while it has a strong earnestness to its soul and parts of its execution, Blue Miracle just can’t shake off the countless amount of genre tropes that it is purely running with. It is simply another one of these kinds of movies, and not much more; for the gentler crowd, it’s wholesome and rewarding enough, but for those looking for more of a challenge, then they should perhaps take their business elsewhere.

Blue Miracle runs wholeheartedly with its endless inspirational sports movie clichés to wholesome, but ultimately unremarkable, effects and results, despite some stunning cinematography and lively turns by the likes of the ever-entertaining Dennis Quaid, who even in his full over-the-top nature can’t save the script from an overwhelming wave of familiarity and predictability.