Blow The Man Down (Review)

Blow The Man Down (Review) 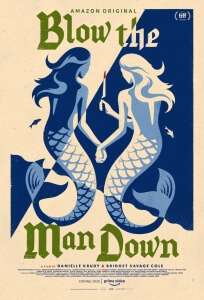 BASICALLY…: After they attempt to cover up a gruesome crime, two young women uncover a dark secret about their town…

Blood Simple isn’t talked about a lot when it comes to the Coen Brothers’ filmography; their debut feature contains many of the traits they would later become synonymous with, from its intensely dark atmosphere to the pitch-black sense of humour, but it is often eclipsed by their more prolific follow-up movies which contain just as out-there, if not even more, moments than their first film.

Expect a similar career path for first-time feature writers and directors Bridget Savage Cole and Danielle Krudy, who with their own debut film Blow The Man Down have established a dark tone and somewhat quirky style all of their own, and left enough room for it to grow and develop which should easily bring them just as much success as the Coens.

Taking place in the quiet seaport town of Easter Cove in Maine, the primary focus is on sisters Priscilla (Sophie Lowe) and Mary Beth (Morgan Saylor), who have just buried their mother and are left with an uncertain future, as well as an impending eviction from their home because of their mother’s financial troubles. While she goes out to drown her sorrows, Mary Beth picks up a unkempt man from the bar, but after he makes some unwanted advances on her she ends up killing him. Both sisters conspire to cover their tracks, but in doing so they get themselves caught in a web of conspiracy within the town, all leading back to Enid (Margo Martindale), the no-nonsense madam of a local brothel.

Right away, the movie sets a sombre mood with a chorus of fishermen singing the titular sea shanty as they go off on their daily duties, acting as the de facto narrators whenever they pop back up to sing more of those tunes to nobody but the audience. It’s certainly a quirky way to establish a Greek chorus, but it works in giving the film a unique identity that isn’t afraid to get a little theatrical now and then. From there, events shift into place like they would in a play, moving swiftly from one scene to the next, filled with combative dialogue and larger-than-life characters which become more layered and fascinating as the film goes along. Cole and Krudy also don’t hold back on the more sinister elements of the story, many of them provided by Margo Martindale’s towering supporting performance, to which she commits so strongly that she makes her character seem both intimidating and also sympathetic in the same scene. However, the manage to balance that out with some dark humour that would put a big smile on the Coens’ faces – when one of the main girls is disgusted by a corpse, the other likens it to coleslaw which helps her feel less disgusted – and the broad accents of the locals is often used to amusing effect, much like the exaggerated Minnesota speak in Fargo.

The story is woven with so many interesting characters that you want to know more about, all operating within a system that seems to have a lot of decent history to it, that sometimes you wish the movie was more focused on some of these other townsfolk. That isn’t to say that the main storyline involving the two sisters is bad, because it isn’t – it’s well-paced and nearly laid out, with both Morgan Saylor and Sophie Lowe delivering some exceptional turns in the process – it’s just that other characters, like June Squibb as a concerned neighbour or Gayle Rankin as an emotionally traumatised prostitute or especially Martindale who, again, is the film’s MVP, are the ones you’re left wanting to know more about. If anything, the movie is slightly overwritten, with so much story bursting at the seams but such little time and devotion given to all of it in favour of the main plot and character which, more often than not, feel like audience surrogates as the film takes us on a tour through this secretive little town.

Overall, though, this movie was a nice surprise; it was intriguing, the characters were entertaining, and the writing and direction is solid without being too upfront about its core themes. It’s worth streaming on Amazon Prime if you’re in the mood for a thriller that gets the job done, and if nothing else it’s a fine debut for a couple of filmmakers who, if they play their cards right, could trail the Coens in no time.

Blow The Man Down is an intriguing thriller that boasts some strong writing and characterisation, brought to life by not just the writing and directing team of Bridget Savage Cole and Danielle Krudy, but some stellar performances as well, especially a towering supporting turn by Margo Martindale.