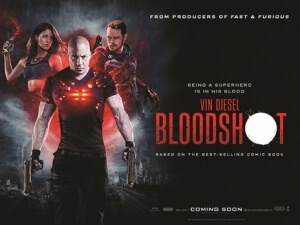 BASICALLY…: Ray Garrison (Diesel) is reborn as an enhanced superhuman soldier, who seeks revenge on the guy who killed him and his wife…

As the world waits patiently to see if Fast & Furious 9 will follow in the footsteps of No Time To Die and be postponed by several months due to the coronavirus outbreak, there is another Vin Diesel action movie to check out in the meantime – and it will immediately leave you pining for that ninth film even more.

We begin as Ray Garrison (Diesel), a US Marine, is spending some quality time with his wife Gina (Tallulah Riley) – but that comes to an abrupt end when they are kidnapped, and then killed, by a maniacal man named Martin Axe (Toby Kebbell). Much to his surprise, however, Ray wakes up in a lab – conveniently with no memory – where he learns that he has been fitted with nanotechnology which instantly heals him from any injury, and also gives him superhuman strength. After becoming acquainted with other upgraded persons such as KT (Eiza González) and robot-handed scientist Dr. Emil Harting (Guy Pearce), his memories start flooding back and he sets out to get revenge on Axe, using his newfound powers to exact vengeance.

Or so, the first half of this film suggests. Halfway through is a twist that definitely changes how everything plays out, and it is an unexpected and rather interesting new direction… or at least it would be, if a) it wasn’t put in the trailers, and b) it wasn’t ripping off nearly every movie like this in the process. Bloodshot is extremely derivative of other, more thought-provoking sci-fi action films which you’d much rather want to watch instead, because this film offers nothing interesting enough to hold your attention as ones like Robocop or Upgrade did; the writing is hokey, the heroes are bland and one-note, and the action is either marred by jarring geographical misplacements or CGI that is so bad that you’ll think you’re in the midst of playing a PS4 game instead of watching an actual movie.

Let’s talk about that action first, which is sometimes shot so confusingly that you’ll be wondering what’s going on half the time, and aside from one sequence set in a tunnel and involving tons of flour for some reason, they lack a certain style that stands out enough to carry itself. Sometimes, the movie hilariously fails to properly guise itself as taking place anywhere outside of South Africa where the whole thing was shot; scenes set on a harbour in Italy are passable, but when the movie briefly shifts the action to England (including, randomly, East Sussex) it becomes overwhelmingly noticeable. A lengthy chase sequence set in what is supposed to be a British suburb is jaw-droppingly anatopistic, because the streets, houses and even the cars – which all contain number plates that are clearly not UK based in any way shape or form – are so blatantly from South Africa and resemble nothing of what an actual British suburb looks like. The action suffers greatly because you’re so distracted by the filmmaking blunders and the awful CGI that you can’t even pay attention to what’s actually happening in the scene.

It matters even less because it’s filled with plot and characters that you really don’t care about. Beyond the overall plot being the same basis for so many other sci-fi action films like it – except marred by way worse effects than many of them – it never springs to life like it should. The film constantly fails to explore many of the avenues it opens up, and moves things along too fast for there to be any actual development of these characters; not five minutes after Diesel learns he is now super-strong and can be healed in seconds by these little “nanites” in his bloodstream, he’s on the move and using his new powers as though he’s been training for ages with them, and not once during that time do we really get to know this guy. Diesel’s glum performance – far from the obnoxious machismo of Xander Cage, but nowhere near as heartfelt as Dominic Toretto, or even as menacing as Riddick – fails to inspire even the slightest bit of interest in an extraordinarily bland lead hero, leaving it only to Lamorne Morris (who shows up a little later as a Cockney tech genius) to inject some form of life into the movie.

In terms of superhero movies, this is exactly the kind of film that would have come out in the early 2000s, right around when Sam Raimi’s first Spider-Man movie became a massive hit (in fact, the effects in this movie are about on par with the CGI in that movie too) and every other studio was trying to ape off of its success in some way. Alas, in a world where Marvel and, to an extent, DC rule the roost, Bloodshot is a relic of a bygone superhero movie era that went extinct for a good reason.

Bloodshot delivers few thrills or genuine superhero fun in a film that fails to match its more well-known competition in terms of plot, characters, action and effects, leading to a dull and pretty lame movie which not even a glum Vin Diesel can save.

Want to decide what the movie’s like for yourself?
Check out Bloodshot showtimes in London
via