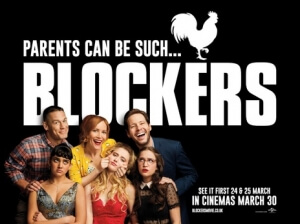 BASICALLY…: When they learn of their daughters’ pact to lose their virginities on prom night, their parents (Mann, Barinholtz and Cena) set out to stop them from sealing the deal…

It’s appropriate that for her first time in the director’s chair, Kay Cannon – best known for writing the Pitch Perfect series – has made a movie about someone else’s first time, albeit in a completely different fashion.

The act of losing one’s virginity has been a long-running theme in most teen movies, from American Pie to Superbad, but while many of those films have been largely from the guy’s point of view, so rarely have we been able to see if the girl in the situation can be just as randy and sexually motivated.

Along comes Blockers, then, to offer a very different kind of teen sex film; one that’s not only smart and tactful about its subject matter, but also very, very funny in numerous places.

It’s prom night, and childhood friends Julie (Kathryn Newton), Kayla (Geraldine Viswanathan) and Sam (Gideon Adlon) have made a pact with each other to lose their virginities that evening to their respective dates. Meanwhile, their parents – Julie’s single mother Lisa (Leslie Mann), Sam’s estranged father Hunter (Ike Barinholtz), and Kayla’s emotional and overly protective dad Mitchell (John Cena) – are concerned that their daughters are about to grow apart from them as they begin to move on with their lives, so when they find out about their sex pact they race out to try and talk some sense into their girls before it’s too late.

What I really admire about this movie is how quick it is to call out the parents for trying to stop their teenage daughters from sealing the deal, while also championing the girls themselves for making their own decisions as to whether or not they should actually go all the way. It’s much more of an ensemble movie than the trailers let on, which seem to put the parents more in the spotlight (which is understandable, because they’re the more recognisable actors in the movie), but it’s just as much the girls’ movie as it is the parents’. All three of the girls have distinct personalities as well as their own situations that are completely sympathetic and appropriate to their age; Julie, for instance, is motivated by her desire to stray far away from her emotionally overbearing mother, while Kayla is keen to open up to new experiences like drinking and taking drugs, and Sam is conflicted because she is secretly gay but isn’t entirely sure of her feelings yet. These are well-rounded and fully defined characters in their own right, and have as much dramatic weight as well as deep charisma to carry them through as the trio of actors playing their parents. Speaking of whom, the indomitable team of Mann, Barinholtz and Cena are a hoot in this film; they have great chemistry with each other and are just as keen to flex their comedic muscles as well as their dramatic ones (Cena in particular, aside from the fact that his own muscles go without saying, is a comedic standout, which perfectly goes along with how Viswanathan, as his on-screen daughter, gets to shine in her own unique way).

This being a teenage sex comedy, you’re goddamn right this is going to have a bit of gross-out humour within its soul, which again keeps in spirit with the teen comedies of the past, most specifically the American Pie films. But Blockers never goes so low as to having their characters stuff a piece of dog turd in their mouths (thanks for that image, American Pie: The Wedding); the humour, like the film’s treatment of teenage girls willingly eager to have sex, is both pleasingly silly and surprisingly mature at the same time. Sure, there are one or two penises in there somewhere, including at least one close-up of firmly-grasped testicles, and then of course there’s that “butt-chugging” scene that’s all over the film’s trailers, but not only are they funny, there’s also a perfectly logical reason as to why it’s there, as opposed to being gross just for the sake of being gross (that, and because other films like American Pie did it). The humour is largely at the expense of the parents, who believe they are doing all of this for the sake of their daughters, but really are just trying to mask the fact that they are most certainly not okay with their children going off and making lives for their own in the great big world. It’s a classic case of empty nest syndrome, only in this instance they’re setting out to do something which could make their daughters’ transitions into womanhood a lot worse, but they’re so blinded by their insecurities that they can’t even admit to the blatant double standards that they are unintentionally promoting.

That’s where Cannon’s strength as a director chimes in, when it actually calls out those who seek to ruin a girl’s chance at sexual discovery but would be totally fine with it if they were a guy. The movie handles such a dilemma with more maturity than you would find in one of these kind of films, resulting in a positive message not just about sex but about seizing a moment and coming into adulthood in a way that doesn’t – and shouldn’t – be prevented by backwards-thinking individuals. I left this movie with a great big smile on my face, from the fact that I was genuinely laughing quite a lot in this film, but also from how it empowers a whole generation of young people who, after years of being subjected to common gender stereotypes, finally have a film that says you can embrace who you are and what you strive for when it comes to sex, no matter what gender they may be.

Blockers has a lot of genuinely funny moments, with even the majority of the gross-out humour working to the film’s benefit, but it’s also a surprisingly mature and thoughtful take on female maturity that will put a real smile on your face.