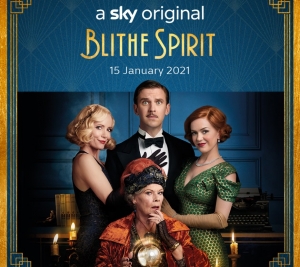 BASICALLY…: A struggling writer (Stevens) hires an eccentric medium (Dench) to communicate with spirits as inspiration, but accidentally summons the spirit of his dead wife (Mann)…

Known for his wit, flamboyance and campy writing style, playwright Noël Coward would have scoffed at the latest adaptation of his play Blithe Spirit, which either features very little or far too much of those things.

Previously adapted for the screen by David Lean in 1945, Coward’s farcical play – now in the hands of stage director Edward Hall, making his film debut here – lends little to the new director’s take which heavily emphasizes the screwball nature of the premise, but forgets to actually make any of the jokes funny or any of the characters interesting enough to warrant a viewing of the thing.

Taking place in 1937, the film concerns Charles Condomine (Dan Stevens), a crime novelist who’s been commissioned to adapt one of his novels for the screen. He is suffering tremendously from writer’s block, something that his wife Ruth (Isla Fisher) can’t seem to help him with, but he soon gets an idea to get himself back on track: he hires disgraced medium Madame Arcati (Judi Dench) to perform a séance at their home, which he will then use as inspiration for his screenplay. However, the séance perhaps goes too well, as it summons the spirit of Charles’ dead wife Elvira (Leslie Mann) which only Charles can see, and unfortunately for him she’s none too pleased that her husband has gone and remarried someone else, leading to an increasingly volatile tug-of-war between both women for his ultimate affections.

The most glaring fault of this film, which in its premise alone invites numerous comedic possibilities, is that it’s almost aggressively unfunny. There’s barely a single laugh to be had in this adaptation, which is mind-boggling because the play itself can be riotous at times, yet something appears to have been gravely lost in translation. Hall’s flat direction here may be key to this; a play is only half of the production, and in this instance the words struggle to break free from the chains of the director’s bland and noticeably reserved vision. Despite the Art Deco set designs and faint glimpses of Hollywood glamour (the likes of Alfred Hitchcock, Cary Grant and Greta Garbo make background cameos), there’s a distinct lack of charm or charisma on display, because Hall is largely working from a script is a dry well of humour with lines that only exist for a non-existent audience to laugh at, and characters who are either too arrogant or too uptight to really care about. Even still, Hall’s direction still underwhelms in how unadventurous and pedestrian it is, which really doesn’t do Coward’s original farce any favours.

It’s also one of those comedies where the actors appear to be self-aware about the fact that they’re in a comedy, which means that more often than not there are turns which greatly dial up the silliness without any restraint, all in the hopeless effort of mining at least one laugh out of this damp script. As a result, you get good actors like Dan Stevens, Isla Fisher and Leslie Mann doing nothing but mugging all the way through their scenes, going over-the-top in an often obnoxious manner which makes the theatrical material translate even more poorly to the screen; it’s easier to get away with an over-the-top performance if this was being performed on the stage, but there are different rules with movies so the effect is not nearly as strong as it would have been otherwise. The only actor who appears to respect the material here is Judi Dench, who relishes the chance to play a role that’s far less embarrassing than her recent ones in Cats and Artemis Fowl combined, though her presence is largely just for show in a role that is clearly expanded for the screen just to give Dench more screen time; her character and sub-lot otherwise feels like filler.

Like most movies due for a cinema release last year, Blithe Spirit has quietly found its way onto digital platforms (in this case, Sky Cinema has taken over distribution), and to be honest it’s both a relief and a shame that this never made it to the big screen. Sure, the end result still wouldn’t have been very good, but perhaps seeing this film with an audience – as one might do when seeing this play in a theatre – might have made a little bit of difference, seeing how there’d be at least one other person who’d find some laughter here. Watching it alone in your house just doesn’t have the same impact, whereas surrounded by strangers in a dark auditorium who might be getting more joy out of it than I did might have made for a more wholesome experience, since then I would have been happy that somebody out there is responding well to it. Unfortunately, we won’t see a return to that kind of movie-going experience for at least a couple more months (not too far away, hopefully), and so we’re now stuck with a film that’s based on a play that works best with a live audience present, and doesn’t work partly because there isn’t an audience to share it with.

It’s a frustrating cycle, and makes one pine for that kind of experience to come back sooner rather than later. Regardless, if this did end up coming to cinemas, I doubt that Blithe Spirit would have made much of an impact either way.

Blithe Spirit fails to capture the wit and farcical nature of Noël Coward’s original play, in an adaptation that suffers greatly from an unfunny script, flat direction, and performances which feel obnoxiously self-aware about the fact that they’re in a comedy. 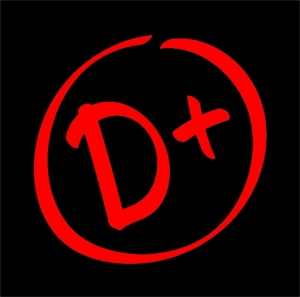