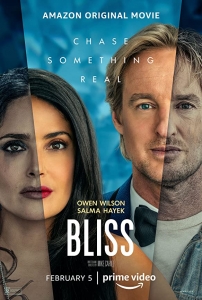 BASICALLY…: When Greg (Wilson) meets the mysterious Isabel (Hayek), he begins to believe her theory that the world around them is a simulation…

Bliss, the strange new movie from filmmaker Mike Cahill – previously of other odd sci-fi tales like Another Earth and I Origins – appears to only exist so that some of the more obsessed theorists of The Matrix can put it forth as an example to show the world that the ground-breaking Wachowskis movie is, in fact, an allegory for hardcore drug addiction.

That is what I choose to believe about why a film like this exists, because it’s too off-kilter to appeal towards mainstream audiences, and it’s way too heavy-handed to stand on its own as an allegorical sci-fi.

In the film, a normal guy named Greg Wittle (Owen Wilson) appears to live a less than desirable life; he’s divorced, he isn’t that close with his adult children, and he’s just been fired from his stressful job. It’s around this time that he meets a woman named Isabel (Salma Hayek), who quickly manages to convince Greg that the dull, grimy world around them is nothing more than a simulation, and with the assistance of some powerful, digestible crystals, they can telekinetically warp everything and everyone in their path. Things get even more out of hand when Greg discovers the “real” world beyond their own reality – but the question is, which one is the true fake?

However, a more apt question would be, “how much time does the film think its audience needs before they finally realise what this movie is clearly trying to be about?” The answer is not as much as it thinks, because the way that certain things are shown, the particular type of strung-out and manic performances these actors are giving, and the blatant on-the-nose writing that clearly embodies specific types of behaviour, it is very easy to pin together what kind of topics that Cahill wants us to take away from this story. There are plenty of sci-fi movies that are able to work in some grounded allegories, and some of them do it well like District 9 or Demolition Man, but Bliss is among the crowd that doesn’t seem to think too much of its audience because it refuses to keep its intentions close to its chest, instead just showing us its hand at every available turn. There isn’t much subtlety to this film, and that’s a shame because this director has made films in the past that have sometimes done well to leave certain things up to the viewer, but this one just wants us to hold its hand throughout and bash you over the head with its hidden themes and messages.

It’s somewhat fitting that this film is primarily about some kind of drug addiction, because the plot in and of itself is bizarre enough to exist in a crackhead’s warped imagination. Without spoilers – because some of this needs to be seen to be believed – one of the first scenes in the movie suddenly transforms into a Weekend at Bernie’s situation as though this were a full-on comedy starring Owen Wilson. From there, things get even weirder; Salma Hayek, essentially a homeless and cracked-out Morpheus, shows Wilson how to make objects bend to their will, which includes messing with people at a roller disco and crushing nearby minivans by clenching their fist. That won’t even prepare you for what comes in the film’s second half, least of all an extended cameo by Bill Nye (though, after Mank, it’s not the strangest cameo he’s made in the last few months), and it all plays out as though Terry Gilliam was given a slightly larger budget than normal to execute some of his crazy ideas. It’s a film that clearly wants to be a quirky sci-fi story with a serious allegory, but it doesn’t entirely work as either of those things because the tone is all over the place, and its themes are not just obvious but also tend to send some mixed messages regarding its stance on actual drug usage (the implication, at least for a large majority of the film, is that by exposing oneself to powerful hallucinogens you can be transported to a perfect utopia that’s free of poverty and suffering).

While there are some decent things to say about it – some of the cinematography is cool-looking, and the lead performances (Hayek in particular) are good for the most part – I think this is going to be a strange movie for audiences to behold. It’s already getting a bit of a beatdown by critics, but while I don’t necessarily agree that it’s 28% on Rotten Tomatoes bad, it’s still an all-too strange and weird movie for most people to get on board with, and I can see a lot of viewers writing it off as overbearing, pretentious drivel that can’t pick a lane and stay in it.

Though Bliss gives you anything but, it’s at the very least a head-scratcher if ever there was one.

Bliss is an all-too strange and potentially alienating sci-fi film with themes that are far too unsubtle and ham-fisted to get behind, and has ideas which on paper seem interesting but are executed in an extremely odd fashion which makes it hard to even be all that fascinated by.