Blinded By The Light (Review)

Blinded By The Light (Review) 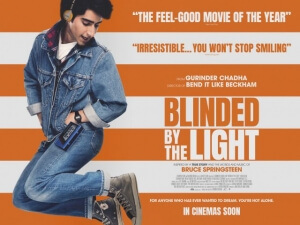 BASICALLY…: In 1987, British-Pakistani teenager Javed (Kalra) discovers and is heavily inspired by the music of Bruce Springsteen…

We’ve had ABBA jukebox musicals, Elton John jukebox musicals, and even a Proclaimers jukebox musical, so it only makes sense for there to be one featuring the songs of Bruce Springsteen as well. However, Blinded By The Light sets itself apart from other musicals that exclusively feature music by popular artists, in that the songs largely serve as a launching point for a charming and very well executed coming-of-age story, with The Boss’ greatest hits popping up every now and then to add further fuel to the story without entirely dominating.

Although, it is a musical in the lightest of senses; only every now and then do characters suddenly burst into song and dance, and even then it’s done in a very realistic manner as though it was all thought up and done on the spot rather than feeling suspiciously choreographed and rehearsed. It’s an interesting way to approach the musical aspect of this film, and it doesn’t distract from the more poignant storytelling that Chadha has gifted this very likeable and easily accessible movie.

Based on the life of journalist Sarfraz Manzoor, the film is set in 1987 when British-Pakistani teenager Javid (newcomer Viveik Kalra) is living in Luton with his family, including his strict traditionalist father Malik (Kulvinder Ghir) who dominates the household with his fiercely outdated morals. When he begins attending a local sixth form college, where he expresses dreams to be a writer instead of studying economics as per his father’s insistence, he meets and befriends Sikh student Noops (Aaron Phagura) who gives him two cassette tapes featuring the music of Bruce Springsteen. From the moment that Javid plugs one of the tapes into his Walkman, he is transfixed; a creative force awakens inside of him as Javid develops his obsession with The Boss, which gives him the confidence he needs to further his writing ambitions by signing up for the college’s newspaper, to adopt a unique fashion and personality similar to the man himself, and to even win over the pretty young activist Eliza (Nell Williams). Most of all, though, it fills him with an even greater desire to branch away from his family’s traditional roots, and away from his father’s stern dominance.

Chadha, herself of Indian heritage, is of course well versed in depictions of British and Indian culture clashes, with her breakout film Bend It Like Beckham exploring similar themes as this movie – just substitute Bruce Springsteen with David Beckham and you pretty much have it – and more recently with her historical mini-epic Viceroy’s House which was set during the end of British rule in India. However, Blinded By The Light feels like a very different film to those with not just its uplifting and crowd-pleasing tone, but also in how honestly it depicts some pretty brutal realities of Thatcher’s Britain during the mid-to-late 80s; for instance, employment is shown to be plummeting so hard that it’s affecting the main character’s father, who after sixteen years of loyal service is suddenly let go from his job and has to push his family to go out and earn what they can just to pay the bills, because the job centre is all but useless. More poignantly, the rise of racism and nationalist groups is alarmingly noticeable, with skinheads spraying racist graffiti on garage doors, Javid and his family being verbally and physically tormented by white bullies at every turn, and even a group of young kids are shown to urinate through the post box of a family member’s home as they yell hurtful insults. There are clearly a lot of parallels to unwrap between what is shown here and what’s going on in the world right now, but Chadha doesn’t let them completely overshadow the story she is telling, only bringing them up when entirely necessary, and when she does it’s done very powerfully and written in such a way where you could easily see elements of this depicted time period being part of today’s society without it getting too ham-fisted or blatant. Time and time again, she had proven to be a smart filmmaker who knows exactly what she’s talking about when it comes to depicting this sort of thing, and here she uses it to her advantage as it helps her further this sweet story with these likeable and three-dimensional characters.

Viveik Kalra, who makes his feature film debut here after appearances in a couple of TV shows – one of them being ITV’s Beecham House, also directed and created by Chadha – makes a strong case for being in more lead roles, as he is very good and extremely likeable as young Javid, as you can see the inspiration hit him like a ton of bricks once Springsteen comes into his life, and while you admire his newfound optimism and lust for life you also get to see other sides to him like a perfectly natural tendency to be selfish as well as acting high and mighty, which the actor pulls off extraordinarily well in a way that makes his character not feel like just an average coming-of-age protagonist. You feel his optimism, you feel his frustrations, and most of all you feel compelled to see him make it through to the end and achieve his goals while also recognising what he can never escape from, no matter how hard he tries. Even Kulvinder Ghir as Javid’s stern father is not just a cardboard cut-out; while at first he seems antagonistic and stubbornly stuck in his traditionalist ways, you do understand where he’s coming from as, again, he’s got to find as many ways to make ends meet as possible when he’s suddenly made redundant from his job, even though his methods are as backwards-thinking as Javid’s are forwards.

Fans of The Boss will undoubtedly come for the use of his songs throughout, and they are used well if sparingly, but it is Chadha’s unflinching portrayal of a hostile period of time as well as a sweet story filled with warmth and likeability that everyone will end up staying for.

Blinded By The Light is a charming and extremely likeable coming-of-age story that certainly contains a lot of love and enthusiasm for the music of Bruce Springsteen, but writer-director Gurinder Chadha goes an extra couple steps further with a depiction of hostile race relations during Thatcher’s Britain that’s poignant and well done without ever taking away the impact of the overall story she is telling.

Check out Blinded By The Light showtimes in London
on Walloh.