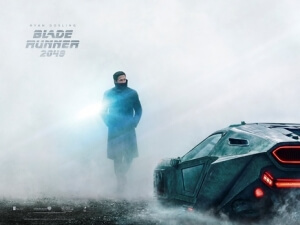 BASICALLY…: In futuristic Los Angeles, “blade runner” K (Gosling) uncovers a secret that could upset the balance between humanity and “replicants”…

WARNING: This review contains mild spoilers for Blade Runner 2049 – if you want to go in with as fresh a perspective as possible, then I urge you to stop reading and just go watch the damn thing, then come back and share how awesome a movie is was.

I think it’s pretty safe to now say that Denis Villeneuve is one of today’s greatest filmmakers, because not only during the course of the last few years has he turned out hit after hit with Incendies, Prisoners, Enemy, Sicario and Arrival, all of which have rightfully earned him some serious adoration with critics and general audiences, but his latest film is one that had the near-impossible task of following up what is widely considered to be one of the best sci-fi movies ever made, and yet it manages to complete that task, and then some.

Blade Runner 2049, the long-awaited sequel to Ridley Scott’s ground-breaking and heavily influential movie, is to the original what The Godfather Part II is to the original Godfather; a sequel that expands on its predecessor’s themes and characters, and takes them to new and exciting places while also proving to be an exhilarating watch on its own. It is, among many things, one of the best sequels ever made, as well as the closest to a modern day epic that we have gotten this millennium, and even more astonishingly – please don’t kill me for saying this, hardcore purist fans of the original (or whichever version of the original you hold closest to your chest) – it might even be better than the first one.

The movie kicks off thirty years since the events of the original, where “replicants” – humanoid robots with eerily convincing human flesh – are living a hostile existence in the futuristic city of Los Angeles. One such replicant, K (Ryan Gosling), is a “blade runner” whose job is to hunt down and “retire” any illegal replicants that are still active, and who early on discovers a makeshift tomb containing a secret that threatens to upset the balance between humans and machines, which again is already pretty intense. Despite orders to discard the case from his superiors, K sets out on his own investigation to piece together the puzzle, going on a journey of self-discovery that will eventually lead him to former blade runner Rick Deckard (Harrison Ford), and will see him being tracked by Luv (Sylvia Hoeks), the ruthless henchwoman of replicant manufacturer Niander Wallace (Jared Leto) who wants the secrets for his own purposes.

Much like the newer replicant designs in comparison to the older models, this is a sleeker, tighter and more focused movie than the original, and while the first Blade Runner is certainly a classic for a good number of reasons, it tends to suffer from an unfocused narrative, never exactly settling on what it really wants to be about. This movie, however, right from the off knows exactly what it wants to achieve, and Villeneuve delivers on the bleak atmosphere and gritty film noir feel to it while simultaneously taking this world to newer and bigger places. He understands how to reach the heart of his lead protagonists, even in the darkest of situations, and he makes that the grand centrepiece of the whole thing instead of any of the more technical aspects. This is K’s story from beginning to end, and a combination of tight direction and an astonishing performance by Gosling helps you understand this walking machine’s personal conflict, which ties in neatly to one of the film’s many themes of identity and how even the most direct of man-made contraptions can eventually gain a soul. His emotional journey is absolutely vital to this movie being the success that it is, and the fact that you really feel his anguish about being torn between what he is and who he is, as well as his adorable connection to a female hologram named Joi (Ana de Armas) makes this a gripping tale that keeps you hooked all throughout its extended running time.

A lot of people have already been campaigning for this film to be the one that finally earns esteemed cinematographer Roger Deakins his first Oscar, after 13 nominations and no wins, and now I must also join that campaign. Deakins’ work here is beyond anything you will witness all year at the cinema, and his breathtaking vision of futuristic Los Angeles and the grimy and cloudy hell hole that it appears to be is a true work of art, incorporating all sorts of visual styles and colour pallettes, from the neon-lit backstreets to the apocalyptic-looking orange landscape of what used to be Las Vegas in this universe. Like a lot of people, I’ve come to seriously admire Deakins’ work, and he has created some images in film that have really stuck with me and even inspired me to be more creative in photography of any kind, but this is a game-changer even for someone like him. It is one of the best-looking films of the year, if not the decade, and as many other people have declared in their reviews, if Deakins does not win for this then it would be a crying shame.

Just as much as there are people who never really got into the first Blade Runner, expect there to be those who walk away from this feeling a little confused or even a bit cold, and it’s easy to understand why. It is a complex narrative, weaving in several themes of what it is to be human and gain humanity, and sometimes it’s not always easy to fully immerse yourself into the plot because you’re struggling to figure out what is actually going on. The lengthy running time of well over two-and-a-half hours certainly can cause people’s minds to wander a little as well, but personally I felt that there was just enough on a visual scale to keep me thoroughly transfixed the entire time, and while I was able to follow the story just fine I completely get it if there are those that don’t.

It certainly doesn’t detract from how Blade Runner 2049 is a true modern epic that absolutely deserves to be seen on the big screen, in fact it’s worth spending a bit extra to see on an IMAX so you can see its gorgeous colours on the largest screen possible. It’s no wonder that Villeneuve is currently lining up to direct both a Dune and Cleopatra movie, because he seems to have mastered how to make an epic that is so grand in its visuals, not just its cinematography but also the production design, costumes, and the astonishing visual effects which contain one of the most impressive examples yet of de-aging a certain actor in a vital scene (I won’t say which, but you’ll know when you see them, especially if you saw the original), but never really loses sight of its emotional core or its cerebral themes. By the end, you are left completely taken aback by the enormous journey these characters have gone on, as well as glad that they’ve allowed you the time to really explore this beautifully unpleasant dystopia and see how it all works. This, along with The Lost City of Z earlier this year, should bring in a new era of genuine epics, ones that are not defined by the CGI that’s been spray-painted all over it, but ones that rely far more on character and story to amaze and enthral you.

It’s an astonishing film in every way possible, and deserves all of your attention, especially if you, like me, just love the power of cinema.

Blade Runner 2049 is a fantastic modern epic that perfectly continues the themes and world established in the original film, and expands on them while also containing an emotionally satisfying story and characters to make this one stand firmly on its own, bolstered by some tight direction, glorious acting, and career-best cinematography by Roger Deakins. It is truly one of the best films of the year.