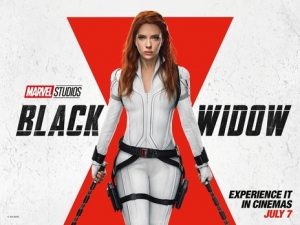 BASICALLY…: Natasha Romanoff (Johansson) faces her past when she is pursued by an unstoppable force…

When Natasha Romanoff, the Black Widow and one of the OG Avengers, sacrificed herself for an Infinity Stone in Avengers: Endgame, fans were in uproar. Some felt that her death was yet another example of “fridging” – an oft-criticised trope where a female character is killed or seriously injured in order to motivate the male lead character(s) – while others felt that it was an underwhelming end to one of the Marvel Cinematic Universe’s most complex characters, especially when she had yet to have been given her own movie in which to fully thrive as a proper lead and not a supporting role.

The majority of those fans will likely predetermine that the eventual arrival of her long-awaited solo film Black Widow (having been in development for a number of years, and subject to heavy release delays due to the pandemic) is too little, too late. However, the more casual Marvel viewers will find this to be an entertaining big-screen entry where Romanoff truly gets to shine, and even comes with a surprisingly heavy amount of emotional baggage that sets it apart from the more action-oriented MCU flicks.

Taking place shortly after Captain America: Civil War, we find Romanoff (played, likely for the last time, by Scarlett Johansson) hiding out in Norway from the US government, having violated the Sokovia Accords by helping Steve Rogers and his team. When she receives a package containing dozens of red vials and a message from Yelena (Florence Pugh), her sort-of sister – I’ll explain – and fellow assassin, Natasha finds herself targeted by a masked and highly skilled hunter known as Taskmaster, who has been sent by Dreykov (Ray Winstone), the fierce head of the “Red Room” where Natasha and Yelena were once trained to become cold-blooded killers. She and Yelena reteam for a mission to discover more about the vials and their connection to the Black Widow program, and along the way reunite with their sort-of parents – again, I’ll explain – Melina (Rachel Weisz) and Alexei (David Harbour), the latter of whom was once known as the “Red Guardian”; basically, Russia’s answer to Captain America. Along with her makeshift family, Natasha finally confronts her rather horrifying past in order to stop Dreykov, Taskmaster and the entire Black Widow program once and for all.

Unlike many of the first solo outings for major MCU characters, this isn’t an origin tale and is instead much more of a standalone adventure, which is a wise decision for a character we already know enough about. The closest this movie comes to actually becoming that is the film’s extended prologue where, as children living in mid-90s Ohio, Natasha and Yelena (played by Ever Anderson and Violet McGraw respectively) are suddenly uprooted by their “parents” Melina and Alexei – both of whom are actually Russian sleeper agents posing as an all-American family – and effectively dumped into Dreykov’s hands. Beyond it being a neatly self-contained set piece with good action and suspense, this section also sets up a very dysfunctional dynamic later on as Natasha reconnects with the people she once considered family, albeit in name only. When you break it down, the psychological toll of living a false life with people who aren’t even your real parents or siblings, especially when you’re as young as she is during these scenes, is quite devastating and even sinister, so no wonder Natasha is apprehensive when she first encounters Yelena after so many years (and vice versa), and especially when her fake mother and father come back into the picture. The script, credited to Eric Pearson – who has provided numerous uncredited rewrites for some of Marvel’s biggest films, and also co-wrote Thor: Ragnarok – does well to mainly focus on this aspect of the main character’s past as opposed to just putting her in a loose collection of action sequences, because it’s a previously untapped into part of her story that does make her more interesting than her superpowered counterparts.

Because it is more focused on character and story, Black Widow contains surprisingly fewer action beats than a lot of the other Marvel movies. The action is definitely there, and it’s both well-choreographed and well-shot by director Cate Shortland, but there are long stretches that go by without a big chase or effects-heavy set piece, replaced instead by a lot of lengthy monologues and exposition dumps which threaten to derail the overall pacing, especially as it proceeds through the third act. On the one hand, it’s always great to see Marvel movies take a considerable amount of time with these characters and making them both fun and likeable in equal measures; the easy standouts here are Florence Pugh and David Harbour, both of whom provide a lot of the film’s most poignant and funniest moments whenever either or both of them are on-screen. However, those who have missed seeing the big and explosive Marvel action scenes on the big screen – especially after waiting more than a year for this film to finally come out – might come away feeling slightly underwhelmed by its distinct lightness in that department.

The noticeably lesser number of such scenes didn’t exactly bother me, though, for I was liking how this film was really going as far as it can into exploring new aspects of this long-standing character’s past, without pandering to its audience every ten or so minutes. Certain things which had only previously been hinted at are explored more here than in any one of Natasha’s previous appearances, such as that mission in Budapest with Jeremy Renner’s Hawkeye which we finally get to see fragments of (and although he’s not physically in the movie, listen out for an uncredited vocal cameo by someone who, at the very least, sounds an awful lot like Renner), but again this movie does a respectable job of not leaning too heavily into those details and instead giving us new information that’s played out just as engrossingly.

Hopefully, the vast majority of fans will be satisfied with how Black Widow finally gets her due on the big screen, because she easily carries yet another entertaining entry into the official Marvel movie canon. Next up, we get to see how Shang-Chi and martial arts both fit into the same universe as deadly female Russian assassins turned Avengers.

Black Widow is now showing in cinemas nationwide, and will also available to stream with Disney+ Premier Access from Friday 9th July 2021.