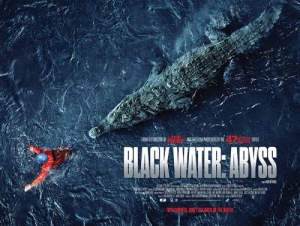 With the first handful of cinemas reopening this weekend in the UK, I’m sure there’s plenty of people who are wanting to go back to the multiplex and seeing films the way they should be seen. However, it’s important to remember that we are still in the middle of a pandemic, so if you are eager to head to whichever cinema might be open right now, please continue to respect social distancing rules and – if you can – try and wear a facemask to catch any germs that might fly out of your mouth. That way, we can reduce the risk of an even greater outbreak, and the sooner we do that the sooner we can finally get back on track with everything as normal.

I was one of the few brave souls to venture out to the cinema this weekend, to see an early screening of Black Water: Abyss, and regardless of the overall quality of the movie – which, it has to be said, isn’t very good – it was an utter delight to be back in those big auditoriums with the giant screens and surround sound, which after three months of seeing films mostly on a laptop was a pleasant relief.

I wish the same could be said about this movie, which makes no apologies for its schlocky B-movie sensibilities with forgettable scares and even more forgettable characters; this is a film that serves its purpose and nothing more, not even doing that great of a job at that either.

A sequel (of sorts) to the little-seen microbudget 2008 Australian horror film Black Water – whose co-director, Andrew Traucki, returns here for solo duty this time round – this movie follows a group of young thrill-seekers who venture into the wilderness of Northern Australia and assail down into a cave system. Unfortunately, extreme weather shows up to flood the caves, leaving the group stranded with very little chance of escaping as the water slowly rises – and as if that weren’t bad enough, a giant crocodile has made its way into the caves and set its dead beady eyes on the group as its latest snack.

As one of the few people who has actually seen the first film – partly due to my own personal connection with it, since my godfather happened to serve as a financier for the movie – I was very quick to pick up on how this is essentially the exact same plot as the first one (specifically: a group of handsome young people go on a trip together where they eventually come across and fall prey to the nasty crocs, which pick them off one by one like a slasher movie villain), the only difference being that this one actually has slightly higher production values. The underground cave sets are where we largely spend the movie, and while at times they do offer a sense of claustrophobia they are also mostly shot in the dark with only dim flashlights providing the lighting, which does make it a little hard to make out what’s going on at times. The crocodile attacks themselves are often marred by blatant CGI as they toss and turn peoples’ bodies in such a cartoonish manner that it almost becomes laughable, and never as scary as the film clearly wants you to think they are.

You also barely feel anything for the characters, because they are so underwritten that I cannot in good faith even tell you their names, let alone why on Earth they’d think any of this would be a good idea, especially when one of them is pregnant (which is a whole other thing in and of itself, and would take way too long to talk about here) and even more so when you realise none of them checked what the weather was going to be like on that particular day. Seriously, between the massive rainfall and the crocodiles, nature is actively trying to kill these people for being so insensible, which combined with later revelations that make some of them look less sympathetic almost makes you want to root for the crocodile instead. The mostly bland performances do little to elevate the material, which sticks all too close to formula that’s been done before, and more interestingly, in other movies like this one; even the original Black Water, while not exactly the most original movie in the world, at least made it work within its limited budget and managed to get a couple of decent moments of tension across. This is much more of a nothing movie, hitting all the beats you’d expect it to hit, and nothing beyond that.

However, while the overall film in and of itself is something of a blank slate, I am so glad I was able to see it in a cinema. Don’t get me wrong, a film like this doesn’t really belong on the big screen, but after three months away from the true theatrical experience I would have taken just about anything if it meant venturing out to see films the way they should be seen (hell, by this point, I would have gone to see something far worse than this like The Wrong Missy in cinemas had they made it an option; that’s how desperate I was to go back). While I don’t necessarily recommend the movie, I would definitely say that it is worth it just to get out to the multiplex once more – provided you are sensible enough to try and keep infection rates down as much as possible. That way, we can finally look forward to seeing films like Tenet, Mulan and The New Mutants the way that they should always be seen: on the biggest screen possible, and as immersive as the screen and sound allow them to be.

While Black Water: Abyss isn’t the preferred way to experience the cinema, it is at least an experience nonetheless.

Black Water: Abyss is a mostly bland and uninteresting horror sequel that doesn’t do anything other than hit the formulaic notes it is expected to hit, with ineffective scares and dull characters who aren’t worth getting to know all that well – however, if you are craving a true cinema experience after three months away, by all means go for it, even if it’s with this nothing of a movie.

Want to decide what the movie’s like for yourself?
Check out Black Water: Abyss showtimes in London
via