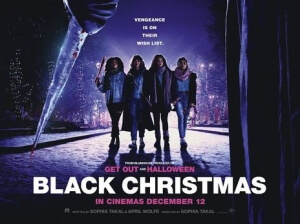 BASICALLY…: A group of sorority girls are stalked by a mysterious killer during their Christmas break…

There is nothing wrong with having a progressive way of thinking, whether it’s lobbying for a more diverse representation in the media or supporting equal pay for women in any profession. However, there is such a thing as being too eager to change the way people think – and I say that as someone who politically identifies as a left-leaning liberal – and the message gets well in the way of the movie you are actually trying to make.

That is exactly the biggest fault with Black Christmas, which is so pre-occupied with being a soapbox platform for modern female issues such as misogyny, gaslighting and rape that it forgets that it’s also meant to be a slasher film – and a pretty rubbish one at that.

A remake of Bob Clark’s 1974 cult classic – although in the loosest of terms, even more so than the 2006 version of Black Christmas – the film takes place on a college campus during the winter break. A group of sorority girls, including Imogen Poots’ Riley, face constant harassment from chauvinistic frat boys and even their professor (Cary Elwes) who elects to teach only male-favouring texts in his classes. Things get even worse when they begin to be stalked and killed by an unknown figure, and must fight back to get out of the situation alive.

It is really a remake of Black Christmas in name only; aside from a couple of notable call-backs to the original, including finding a corpse in an attic and using a plastic bag to suffocate someone, this might as well have been called something else because it feels like a completely different movie. The fact that it takes place around Christmas doesn’t even factor into anything, as you could set it during any other time of year with one quick rewrite, and not a whole lot would have to change. In some respects, it’s good that the filmmakers decided to do something radically different than just simply rehashing the original, but there is so much about this movie which doesn’t work that it leaves you more cold than festive. For one, the kills are extremely neutered; this is the kind of slasher movie – unsurprisingly rated PG-13 in the States, the equivalent of a 12A rating – where hardly any blood is shown, even when characters are stabbed, shot at by a bow and arrow, or even bludgeoned to death. With this kind of movie, unless there’s a specific reason why, you expect the kills to be much more gruesome or at the very least creative, and this movie has none of that because they’ve clearly been cut down to appease a younger audience, who in turn want to see something bloodier than this, and the kills that it does show are bland or done better in other things (there is one scene in particular that rips off a memorable shot from The Exorcist III).

The plot in and of itself makes very little sense, which shouldn’t be an issue for a set-up that, like how it was in the original, is incredibly simple. The trailers for this film at first seemed like they showed the movie in its entirety, and to an extent they do – but in terms of how it gets from point A to point B, they not only kept that a close-guarded secret, but it is completely and utterly ludicrous once it’s revealed. You would never think as you go in to see a movie called Black Christmas that it would tie in to supernatural themes, yet the movie has the balls to drop that bombshell in the middle of one of the many scenes of exposition, containing plot information which seems even more ridiculous the more you think about it. Not even the characters earn your sympathy since most of them, with the exception of Imogen Poots who is once again trying her best with material she is much better than, are very obnoxious and completely venomous to anyone who doesn’t share their opinion.

They tie in nicely to how this film is far more of a woke political statement about female empowerment than an update on Black Christmas, since practically all of their dialogue has to do with stating strong declarations about their womanhood, how the male hierarchy will crumble at their feet, and so on. It’s like if Lisa Simpson wrote a slasher movie, and instead of having any kind of rational discussion about very heavy topics such as rape culture and blind misogyny, it opts for a strawman argument which positions all men as sociopathic monsters. Now, I am not one of those people who complains about poor male representation in the media (and honestly, us guys really have no right to complain), but this movie will demonise any man it sees fit to give screen time to, ironically making this very pro-female statement feel rather sexist. It hammers on and on with this hateful rhetoric all throughout, which makes it feel even less like a film because it is so preoccupied with its beliefs that it periodically forgets to be a slasher movie, and by the time those elements come back into play you’re left so discombobulated by the constant rah-rah statements that you just don’t care anymore. It weirdly feels like reverse psychology, as though the filmmakers are injecting these strong beliefs into their movie so much that people start to become put off by them.

Of course, it’s not a bad thing at all that these people want to deliver these sorts of messages – but maybe don’t put all of them into what’s supposed to be a slasher film designed to entertain audiences, though it fails at being even that.

Black Christmas is a remake of the cult classic slasher movie in name only, because this version is largely used as a platform for the filmmakers to deliver constant messages of female empowerment, which are not bad messages but do not work in a film like this, which doesn’t even function well as a slasher film because it contains neutered kills, a nonsensical plot, and obnoxious characters who demonise anyone that doesn’t share their view, leaving it a cold experience where not even the Christmas setting can lighten things up.

Want to decide what the movie’s like for yourself?
Check out Black Christmas showtimes in London
via