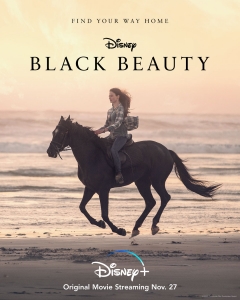 Anna Sewell’s novel Black Beauty is regarded as a timeless piece of literature, read by children all over the world since its publication in 1877, and of course adapted into numerous film and television projects, as far back as the silent era of Hollywood. A lot of its content, though, was always in need of a major update to reflect a more modern society (in the novel, the titular black-coated horse is also known as “Darkie”, which needless to say wouldn’t go over so well today as it did in the 19th century), so bringing the story into a more conventional setting does make sense.

The odd thing about writer-director Ashley Avis’s rendition of Black Beauty, though, is that it feels less like a version of the classic book, and more like A Dog’s Purpose but with a horse instead of reincarnated dogs. It’s better than that film, but it still comes with the twee schmaltz you’d expect from one of those movies, and while some of it is effective it’s mostly just inoffensive fodder for horse-lovers, striving to be nothing greater.

Like in the book, the film is told from the autobiographical perspective of a black mustang (voiced, via cloying audiobook-like narration by Kate Winslet) who, after being born and raised in the wild landscapes of the American West – one of the many changes from the novel, which was primarily set in Victorian England – is captured by rustlers and sold to kindly trainer John (Iain Glen, whose American accent constantly slips back and forth) who intends to calm the horse’s fiery spirit. Soon after the horse’s arrival, John’s estranged niece Jo (Mackenzie Foy) is brought to stay after her parents die in a car accident, and although at first Jo is hesitant to adapt to her new surroundings, she ends up developing a strong connection with the horse, whom she names Beauty. Thereon afterwards, Jo and Beauty strive to maintain their bond, even as Beauty is passed around from owner to owner, with varying degrees of treatment, but also hopeful that they will be together once again.

I don’t know much about the actual book, so I cannot say whether or not it’s a faithful adaptation even with its new modern setting, but as a film it’s easy to see the appeal. The horse they got to play the titular filly is a good animal actor, and Kate Winslet’s narration – as overbearing as it can be – is far more tolerable than the likes of Josh Gad and Bryce Dallas Howard in similar recent dog-based movies, because Winslet is an actress who knows how and when to restrain her vocal performances. The story itself is gentle and accessible, though you can spot a lot of the familiar tropes of animal-themed narrative that Sewell’s original novel perhaps introduced and are now ironically reintroduced here; for instance, the central connection between the animal and its young, often emotionally traumatised human lead is not unlike what you’d previously seen in films like Free Willy, Fly Away Home and – once again – A Dog’s Purpose, as is the numerous adventures the main animal finds itself on once separated from its true owner. Nonetheless, it’s easy viewing for family audiences who might also not be too familiar with the original source material, and the technical aspects from its nice cinematography to some sweet and likeable performances by the likes of Mackenzie Foy and her on-screen love interest Calam Lynch make for a soothing visual experience.

It is, however, very difficult to separate this movie from any other family-friendly animal movie released over the last couple of decades. I know that I keep bringing up A Dog’s Purpose in this review which seems redundant at this point, but this movie has such a similar tone and feel that it’s almost impossible to see it as nothing more than a horse-themed version of that type of movie. It certainly has a slightly more mature approach than something like that other film, but it also has a lot of the same treacly qualities from overwrought emotion to one-dimensional villains, such as a spoiled young horse rider who ends up abusing the horse, and her stone-faced evil-for-no-reason mother who’s like a pantomime version of the wicked step-mother from Disney’s Cinderella (a fitting comparison, seeing how this movie is a Disney+ exclusive). Obviously, there are certain things in the original novel that could not be translated into a modern adaptation – that “Darkie” name naturally being one of them – but by tweaking the book’s plot and development to a point where it resembles something else that was perhaps ironically inspired by something like Black Beauty, it’s ultimately not that memorable of a movie in its own right.

There are enough decent things about it which prevent the film from being truly bad, but also not enough to certify itself as a definitive film version of the classic novel either. It’s accessible, easy to digest family entertainment, but you’re ultimately going to forget about it in a month or so, despite its good enough intentions. Who knows, though; maybe someone who sees this film will be inspired to read the original book and see how it compares, which would honestly not be that bad of an outcome. Again, though, I don’t know a lot about Anna Sewell’s novel to determine how this movie would fare next to its original source, but I’m guessing it would give off less of a feeling that it’s a fine if bland imitation of the formula established in something like A Dog’s Purpose.

Black Beauty updates the classic novel by Anna Sewell for a competent but ultimately unremarkable adaptation, which can’t shake its influence from similar animal-themed movies like A Dog’s Purpose (which, ironically, may have been inspired by the original Black Beauty book), and despite some decent production values and some likeable performances it isn’t memorable enough to stand out amongst even its own previous film adaptations.