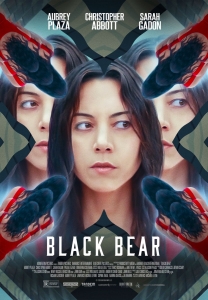 BASICALLY…: A filmmaker (Plaza) seeks solace at a rural retreat, only to find her inner demons surfacing in unexpected ways…

This review of Black Bear was conducted as part of the Glasgow Film Festival 2021.

Well… that was interesting.

That’s really all I can immediately think after sitting through Black Bear, because so much of it is kind of hard to sum up in one go. What the hell do you say about a film that takes numerous unexpected turns after starting out as something completely different? And how does one keep most of it under wraps in an advanced review well before its scheduled mid-April UK release date?

This isn’t going to be an easy review, but I’ll certainly do my best. To get the most pressing answer out of the way first: yes, Black Bear is a good movie. But man, is it… something.

The film, written and directed by Lawrence Michael Levine, starts off normally enough; Allison (Aubrey Plaza), an actress who’s turned to directing, arrives at a remote cabin retreat where she hopes to gain inspiration for her upcoming project. She is greeted by the cabin’s owners, Gabe (Christopher Abbott) and Blair (Sarah Gadon), who almost immediately make things awkward with their blatant hostility towards each other; she’s highly critical of his failed music career, while he’s chastising her drinking problem despite being pregnant. It is, needless to say, extremely awkward for Allison, and as the night goes on disagreements turn into shouting matches, attractions turn into physical interaction, and somewhere in between are long-winded monologues denouncing feminism and even the unexpected appearance of the titular animal.

It’s around this point where the movie kind of goes off the rails, and I don’t necessarily mean that in a bad way.

I really, truly don’t want to get into what exactly happens from this point on, but know that it is definitely a completely different direction than it started out as, and calls into question just about everything we’ve seen up to this point. It really is a film of two halves, with the first setting the stage (as it were) for the dynamic between these three characters, and then the second violently pulling the rug from underneath your feet and revealing something more real but just as painfully awkward to experience (again, not in a bad way). Levine’s writing and direction makes both halves admirably palatable, either one working well enough as their own individual project, but together it’s a fascinatingly bizarre experiment that speaks wonders about how Levine is able to pull you in with simplistic but extremely smart writing, and pace his scenes smoothly so that tones and overall ideas don’t overlap each other.

Black Bear is also carried by three excellent central performances, led by a highly impressive Aubrey Plaza who combines her trademark deadpan deliveries with complimentary dramatic skills not many have been able to see her fully flex until now (once more without going into too much detail about the film’s second half, she has to act drunk for a majority of it, and it’s one of the finest fake alcohol-induced turns since Bradley Cooper in A Star Is Born). Christopher Abbott, who between this, Possessor and the underrated psychological thriller Piercing has really emerged as a compelling genre actor to watch, treads a fine line between smug, self-loathing bastard and a master manipulator with highly questionable actions, all the while creating a fine portrait of someone who’s frequently close to the edge that’ll ring true to anyone in a certain industry. Finally, there’s Sarah Gadon who perhaps has meatier material in the film’s first half than the second, but still brings her A-game with underlying comments and passive-aggressive attitudes that sting all the more extra just by how much she’s selling her venomous dialogue.

Although in the end I did enjoy this film, based purely on the performances and the unpredictable writing and direction alone, it really needs to said that this is not a film for everyone. It’s one of those where you really need to have an acquired taste in order to fully appreciate it, and I can see it easily turning off many audience members who, like myself, are taken aback by the sudden shifts in gear that the film makes. That isn’t to say that only certain viewers will respond warmly to this film, as I still liked it even though my taste for film obviously stretches far beyond ambitious independent films such as this, but I would not be at all surprised if overall audience reactions were more negative than positive (so far, the audience score for Black Bear on Rotten Tomatoes is just under the “fresh” threshold at 59%, compared to its 88% critics rating, which seems perfectly accurate as to my overall prediction).

Honestly, I’m amazed that I’ve made it this far into the review without not only revealing some of its biggest surprises (after all, it just wouldn’t be cool for a film critic like myself to do something like that), but also without compartmentalising the movie as anything specific in particular. Is it a meta dark comedy? A revealing commentary on the process of filmmaking itself? Or just a batty thriller with wildly unpredictable twists and turns? Maybe it’s all of these things, and maybe it isn’t, but what I do know for sure is that Black Bear is most certainly not the film you probably think it’s going to be – and that, more than anything, makes it rather exciting to talk about.

Black Bear is a strange and highly unpredictable film that makes a decisively unique narrative decision halfway through that will leave you both confounded but also intrigued, which writer-director Lawrence Michael Levine is able to plausibly stitch together without losing traction, and the three excellent central performances from Aubrey Plaza, Christopher Abbott and Sarah Gadon that carry it throughout its many unexpected detours.

Black Bear is currently scheduled for a UK release on 23rd April 2021 (as of publication).