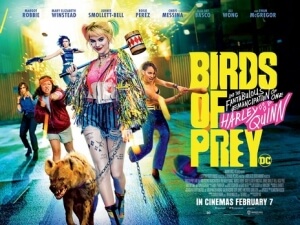 BASICALLY…: After breaking up with the Joker, Harley Quinn (Robbie) finds herself having to team up with a group of woman to take on a sadistic crime lord (McGregor)…

As bad as Suicide Squad was – and to date, it remains the worst in DC’s recent cinematic line-up – one of its few redeeming qualities was Margot Robbie’s take on the fan-favourite Batman villain Harley Quinn, which injected so much life into an otherwise botched studio tentpole that her efforts couldn’t help but feel completely wasted.

Not anymore, because Robbie’s Quinn has finally been given the vehicle that the character deserves, and it’s an utter blast from start to finish, a bonkers fun-house of a movie that does so much right when it comes to a lot of things that it puts a lot of other films to shame, especially Suicide Squad which this movie unashamedly wipes its filthy ass with.

“Filthy” is a fitting description for the magnificently titled Birds of Prey (and the Fantabulous Emancipation of One Harley Quinn), but not at all in a bad way; this is the foul-mouthed, violent and at times twisted tale of Robbie’s Harley Quinn – formerly the psychiatrist Harleen Quinzel who fell hard for her patient The Joker and became his loyal partner in crime – after she and “Mr. J” break up, leaving her without the protection she had previously enjoyed under The Joker’s wing. Word soon gets out that she is now a free bird (largely from Quinn herself, after making her single status public in a very explosive manner), and soon every vengeful criminal in Gotham City wants a piece of her, but none more so than sadistic nightclub owner Roman Scionis (Ewan McGregor), known as the Black Mask. Quinn also finds herself caught in the middle of Scionis’ hunt for a stolen diamond, taken and swallowed by young pickpocket Cassandra Cain (Ella Jay Basco), and also happens to bring Harley into contact with determined cop Renee Montoya (Rosie Perez), vengeful crossbow-wielding vigilante Huntress (Mary Elizabeth Winstead) and feisty nightclub singer Black Canary (Jurnee Smollett-Bell).

They all eventually form the Birds of Prey of the title, but don’t expect that to happen until much further on into the movie. This is definitely Harley Quinn’s movie, and it completely immerses you into the anti-hero’s crazed psyche right from the opening animated prologue onwards, becoming as crazy as you’d imagine a Harley Quinn movie would get, from sequences told out of order to random Marilyn Monroe cutaways. It all comes sealed with the character’s wicked sense of humour, kind of like this live-action Looney Tunes character with a boatload more curse words and a violenter streak to her name, which Robbie fully inhabits down to every last infliction and pulls off to such pleasing effect. Since Jared Leto’s Joker is (mercifully) nowhere to be seen in this film at all, Robbie’s Quinn has enough space to comfortably find her footing, and it’s incredibly enjoyable watching this character go through the motions of a break-up and then learning to move on and mature while also staying the zany airhead she’s become synonymous with being. As a Harley Quinn solo movie, it’s a wild ride.

However, it isn’t just a Harley Quinn movie; the other characters do get their fair share of screen time, and they all get to shine in their own unique ways. It’s cool seeing characters such as Quinn, Black Canary, Renee Montoya and Huntress share quips and personality quirks with each other, with each one of them standing out with moments of awesomeness (many of them in some very well-choreographed fight sequences), comedy that mostly lands, and you always feel like these are real people because the performances are so full of life and energy. Special mention must also go to Ewan McGregor, who is simultaneously having an absolute blast as the movie’s villain, and also proving to be a far better and more sinister Joker than Jared Leto ever was; McGregor brings swagger, charisma and genuine sadism to someone you really want to both hate and also hang out with at the same time, and there are times when he gets seriously scary too (just wait until you see what he does when someone has the audacity to laugh at him). There is no doubt that all of these actors are having the time of their life making this movie, and their enthusiasm shows greatly in the final product.

It’s also to the enormous credit of both director Cathy Yan and writer Christina Hodson that the film retains the hugely infectious energy that its performers emit, as they both bring style, wit, and even a little bit of heart to the chaos. In doing so, they more than outshine anything that David Ayer tried to bring to Suicide Squad because this movie has far more focus (or at least, as much as you can credit to a crazy central character like Harley Quinn), and while its out-of-order narrative structure might be a little jarring at first it has the distinction of being much more fluid in its approach. This movie fixes so many problems that Suicide Squad has that it’s unfathomable to think that it spun off from that movie in the first place (and on that note, I cannot wait for James Gunn to bury it even further underground with his take next year), and even more so that Birds of Prey (and the Fantabulous Emancipation of One Harley Quinn) is as enjoyable and, indeed, fantabulous as that title.

Birds of Prey (and the Fantabulous Emancipation of One Harley Quinn) is an incredibly enjoyable fun-house of a movie that puts the spotlight firmly on Margot Robbie’s lively take on the popular DC character, but leaves enough room for her supporting players and the filmmakers to bring style, wit, and even a little heart to the party.

Want to decide what the movie’s like for yourself?
Check out Birds of Prey (and the Fantabulous Emancipation of One Harley Quinn) showtimes in London
via