Birds of Paradise (Review) – YA Ballet Thriller Is No Black Swan 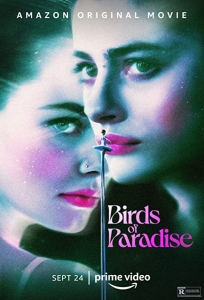 BASICALLY…: Two young dancers (Frøseth and Silvers) compete for a chance to perform with a prestigious ballet company…

A surreal thriller set in the cutthroat world of ballet, about two competing dancers aiming for a top position in the company, whose uneven friendship turns into bitter rivalry, and even partake in a steamy sex scene with one another… am I describing Birds of Paradise, or Black Swan? The answer, as it turns out, is “yes”.

The shadow of Darren Aronofsky’s Oscar-winning psychological horror looms heavily over Amazon’s YA-centric take on the competitive ballet hierarchy, and often overtakes whatever Birds of Paradise has to offer on its own terms. However, the film has moments of nail-biting tension and gothic overtones which help it to at least stand out amongst other, considerably less artsy YA films, if not amongst the kind of films it clearly aspires to be like.

Set in Paris, the film – based on the novel Bright Burning Stars by A.K. Small – focuses on two dancers at a prestigious ballet academy. One is Kate (Diana Silvers), a working-class American dancer who has been granted access to the school via an exclusive scholarship; the other is Marine (Kristine Frøseth), who comes from a much more privileged background and is still mourning the suicide of her twin brother Ollie. Both are among the students competing for the academy’s ultimate prize – an exclusive star-making contract with the Paris Opera Ballet – which, naturally, inspires a lot of competition between the ambitious dancers. Kate and Marine, though, soon form a bond with each other, pledging to win the prize together or not at all, but of course it isn’t long before fate – and their highly contrasting backgrounds – drives a stake through their pact and leads them to become firm rivals.

Beyond the easy Black Swan comparisons, Birds of Paradise can also be described as Dario Argento’s Suspiria (or, by extension, Luca Guadagnino’s recent remake) if the witches never showed up. There is certainly a feel of both Argento and Guadagnino in some of the otherworldly cinematography, which goes heavy on the bright, fluorescent colours in parts as well as tight, dreamlike wide-angle lens shots in others. Director and writer Sarah Adina Smith is known for making films which combine mysticism and surreal imagery, which in a way makes her an ideal person to make this movie because it too relies a lot on such an unnerving atmosphere to tell its otherwise straightforward story.

However, Birds of Paradise is one of those films which likes to wear its metaphors as tackles on its ballet dress, redacting a sense of subtlety that could have benefited a deeper, more complex script than this. Characters will up and say exactly what a certain thing means, or state what their personality flaws are without attempting to hide them underneath carefully-worded dialogue or showy visuals. There aren’t that many surprises as a result, since it is so straightforward with a lot of its themes and metaphors that it leaves little room for other elements to come in and cause quite the stir. A lot of the characters are like this as well, falling neatly into standard caricatures without really being much else; supporting players like Eva Lomby as a fellow dancer at the academy are at first given ample screentime to perhaps hint at some complexities with their characters (Lomby, the only female dancer of colour at the academy, bemoans how much harshly she is treated next to her white contemporaries), but quickly fall back into the background with barely any more focus placed upon them.

The movie itself is like a typical prima ballet dancer: gorgeous to look at, with occasional moments of inspiration, but at the centre is a disappointingly hollow and less interesting personality that’s saved by its unearthly good looks. The cinematography is certainly eye-catching, and some of the performances are rather good (Kristine Frøseth, playing arguably the most morally ambiguous of the two leads, is particularly strong here), but after you dig a little further you’ll find that there isn’t much to say about anything else. There are simply better, more interesting movies about how cutthroat ballet and dancing companies can be – Black Swan, of course, as well as either version of Suspiria – which handle more complex underlying themes and dive deeper into characters’ psyches than Birds of Paradise does, leaving this one to work no better than okay in the moment, but is quickly forgotten in favour of the more outstanding examples that it is trying hard to replicate.

Birds of Paradise is a pretty but hollow dance thriller, which despite some eye-catching cinematography which leans heavily into filmmaker Sarah Adina Smith’s surreal style, and some committed performances by leads Kristine Frøseth and Diana Silvers, runs empty on interesting substance to set itself apart from similarly psychological dance movies like Black Swan or Suspiria.

Birds of Paradise is now available on Amazon Prime Video.