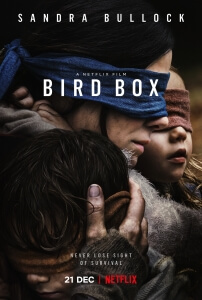 BASICALLY…: A single mother (Bullock) must protect herself and her children from falling victim to a mysterious phenomenon that causes people to kill themselves upon seeing it…

Bird Box, the post-apocalyptic drama directed by Susanne Bier and written by Arrival writer Eric Heisserer, answers the question that nobody wanted to be answered: what would A Quiet Place be like if it wasn’t very good?

The similarities to John Krasinski’s horror film from earlier this year are too great to ignore, from largely unseen monsters that attacks are based on certain senses (in that film it was sound, whereas here it’s sight), to the fact that there are main characters who are pregnant for most of it, and in every single comparison Bird Box comes up disappointingly short. Concerning size in terms of scope and cast, it’s a way bigger film than A Quiet Place, but this movie fails to do what that one did with far less, and that is to actually care about anything that’s going on.

The movie opens with a woman named Malorie (Sandra Bullock) beginning a dangerous voyage with two young children down a river, all of them with blindfolds on. We then cut to the reason behind all this, as five years earlier a then-pregnant Malorie becomes caught up in a worldwide case of hysteria that causes any person to look at whatever is causing everything to suddenly fall into a trance-like state and kill themselves. For most of it, we cut back and forth between Malorie shacking up in a house with other survivors, including the kindly Tom (Trevante Rhodes) and the resident sourpuss Douglas (John Malkovich), and five years later when Malorie is making her perilous trek with the young children.

I’ve heard that the novel that this is based on was once described as “unfilmable”, and there’s some truth to that; when the main premise relies on people not being able to see the threat, that creates huge difficulties when you’re adapting it into a medium that heavily relies on your ability to see. After all, film is a visual medium, and if you take away that aspect of it just to add tension then you may as well be making a big-budget audiobook. This was one of the many reasons why A Quiet Place worked so well, because it heavily relied on its visuals to tell a complete and coherent story almost entirely without uttering a single audible word, and it was such a well-directed and well-written movie that you could understand everything that was going on. With Bird Box, I’ll give credit to both Bier and Heisserer in the sense that they were able to find some way to adapt this story without sacrificing some of the story’s tension, but for a film where the main threat is something you see, you’ll wish that the film relied a lot more on its visuals rather than the clunky script we’re forced to listen to.

That, more than anything, leaves this movie in a bit of a mess; a lot of it consists of exposition dialogue delivered by the most stock slasher movie characters that would be more at home in a Friday The 13th movie than something like this, none of whom you really care about until it’s way too late, nor do you sympathise with most of the time because they’re either too bland or too unlikeable to root for. John Malkovich is basically playing himself in the movie, and it’s exactly the kind of character you’d expect from someone like him; sardonic, cynical, narcissistic, and just a plain nuisance to be around, which I understand that it’s largely the point of the character, but he ends up saying things and doing things that nobody in this particular apocalyptic scenario would even think of doing, and you’re wondering why on Earth everyone still wants him around after a point. You have other characters who show up that in any other movie would be among the first to get killed by Michael Myers or Jason Voorhees; there’s the fast-talking conspiracy theorist played by Lil Rel Howery from Get Out, two polar-opposite good-looking people played by Rosa Salazar and Machine Gun Kelly who get it on faster than teens at Camp Crystal Lake, and Jacki Weaver who’s just kind of there, once again with not a whole lot to do. Watching this section of the movie – and unfortunately it makes up quite a large chunk of it – was like watching the first Purge movie, with the idea more or less formed but instead they’re focusing on this one group of uninteresting characters largely in this one house instead of any of the bigger events going on around the world. There are points when it gets really stupid too, like a scene where they have to drive to a nearby supermarket but to avoid seeing the monster they black out all the windows and characters, relying only on the GPS and the sensors to guide them – it’s not only ludicrous even for this apocalyptic sci-fi tale, but it takes you out of the movie by being unintentionally funny with its overwhelming idiocy.

The movie really is like a dumber version of A Quiet Place, which is really saying something because that film was produced by Michael Bay, of all people; it lacks the consistency, the tension, the drama and the powerful emotion that Krasinski’s movie managed to convey with barely any spoken dialogue and a slightly lesser budget, and watching this you feel like you’d much rather just put that film on again instead. There’s a couple of redeeming qualities to this movie, such as the moody score by Trent Reznor and Atticus Ross, and Sandra Bullock is really trying in this (apparently, she insisted on doing most of her scenes with the blindfold on, which is pretty awesome when you see what she has to do sometimes), but it’s not enough to remind you of a far better version of this kind of story from earlier this year.

Bird Box tries its hardest to make its post-apocalyptic ideas work, but the similarities to A Quiet Place are too great to ignore, and in every comparison this movie falls incredibly short, from a clunky script filled with stock slasher movie characters and exposition dialogue to an overall lack of interest in anything that’s going on.