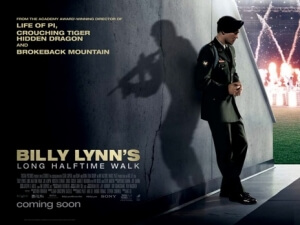 BASICALLY…: US Army soldier Billy Lynn (Alwyn) experiences some disturbing memories of the battlefield during a victory tour back in the States…

Before you hear my thoughts on director Ang Lee’s latest film Billy Lynn’s Long Halftime Walk, please note that I did NOT see it in the highly-publicised 120fps frame rate format; this version that I’m reviewing is the standard 24fps that is pretty much every other movie ever (unless it’s the Hobbit trilogy). So, just to get that out of the way first, if you’re looking for an insight into that type of frame rate that Lee used to film certain scenes of this film, click away now, because this is just about the film as its own product.

With that in mind, as well as the polarising response from critics with a 45% rating on Rotten Tomatoes, I was genuinely surprised that the film itself actually wasn’t that bad – or at least, not 45% Tomatometer bad.

The film is about a young soldier named, of course, Billy Lynn (played by British newcomer Joe Alwyn), who along with the rest of his unit become heroes after footage emerges of their bravery on the battlefields of Iraq. We pick up on them at the tail-end of a victory tour back in the United States, when they are scheduled to attend and perform at an American football halftime show during a Thanksgiving game, alongside all members of Destiny’s Child (it’s worth mentioning that this all takes place in 2004). As Billy and his fellow soldiers stumble from publicity event to publicity event at the stadium, accompanied by a film producer (Chris Tucker, thankfully underplaying things) who is trying to negotiate a film deal for the unit’s story to be told on-screen, Billy experiences flashbacks to his time in Iraq, and to his family whom he briefly visits before the tour.

It is an odd narrative to say the least, since a good majority of the film is set on this one particular day with the rest of the film shown in flashbacks, and truth be told it doesn’t always work. A quiet scene with Billy interacting with his family, especially his sister Kathryn (Kristen Stewart), could suddenly be interrupted by a wild scene set in the scorching deserts of Fallujah, which could then take us right back to the football stadium where they’re just interacting with themselves. The narrative structure feels very random here, and the editing can represent such a jarring tonal shift that it can sometimes cause whiplash, which makes this a bit of a mess as you try to fix the pieces together. It just doesn’t flow very naturally, which given a story as fractured as this probably goes without saying, but there are times when even Lee doesn’t seem to realise just how jarring these different scenes feel together.

While structurally it’s kind of a mess, there are still a lot of positives I found myself taking away from this film, and I think a lot of that comes from the central performance of Joe Alwyn. This is his very first film role after a short stint in theatre acting, and in the hands of a much lesser actor the character of Billy Lynn could have very easily been an extraordinarily bland and uninteresting lead; but Alwyn is a constant marvel here, conveying everything you need to know about this character’s disturbed psyche just from his facial expressions, without the need of paragraphs of dialogue to do it for him. He also shares strong chemistry with his co-stars, from his fellow soldiers to his sister (on a side note, his chemistry with Kristen Stewart is a little TOO good; they’re meant to be brother and sister, but the vibe I got from their uncomfortably sizzling connection together suggested otherwise) to a truly sweet relationship he shares with a cheerleader at one point. Wither on his own or with his fellow actors, he is genuinely great here and carries the film firmly on his shoulders, and I hope to God that the underperformance of this film doesn’t hinder his future as an actor, because I reckon in a much better movie he can be truly phenomenal.

It was also interesting to see the satirical nature of how military men are treated in the media, which can range from overwhelmingly patriotic to, as evidenced by the insane nature of that halftime show, completely blown out of proportion. There’s a scene where Tucker’s producer is discussing the possibility of Hilary Swank playing Billy in the mooted film, due to her winning an Oscar for Boys Don’t Cry in which she dressed and acted like a man, and that right there is just a taster of how insane parts of the industry can be, something that Lee sadly doesn’t touch upon that often in this film. If it had a bit more restraint and stuck to a more solid narrative, then Billy Lynn’s Long Halftime Walk probably wouldn’t have been as wildly polarising; but for me, there were enough positives about the film to say that I am glad that I saw it at least once.

Billy Lynn’s Long Halftime Walk isn’t nearly as bad as some people are making it out to be, with newcomer Joe Alwyn’s captivating lead performance and intriguing media satire just barely holding things together, despite a messy narrative that doesn’t flow as smoothly as it should, and editing that makes the tonal shifts between scenes even more jarring.