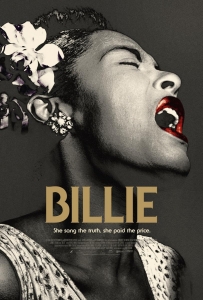 BASICALLY…: The life of famed jazz singer Billie Holiday, who broke barriers and caused controversy with her rapid ascension to worldwide fame…

The last few years have seen a slight rise in documentaries about the lives of famous singers, beginning with the Oscar-winning Amy and as recently as Whitney, with even Ron Howard entering the mix with his Pavarotti doc last year. To have one about Billie Holiday, the acclaimed and ground-breaking African-American singer who dominated her field in the latter half of the twentieth century, seems roughly par for the course at this point, but what’s somewhat surprising about director James Erskine’s Billie is that half of it isn’t even about Lady Day (as she was commonly known).

The opening minute or so lays out that it is also an exploration into the mysterious life of journalist Linda Lipnack Kuehl, who had recorded over 200 hours’ worth of audio interviews across eight years with several people in Holiday’s life, as part of her lifelong quest to pen the definitive biography on the tragic singer. Kuehl’s own life, however, would also meet a tragic end when, before she could finish her book in 1978, her body was discovered in an apparent suicide; to this day, Kuehl’s surviving family believes that her death may have been a direct response to some interviewees not being entirely happy about her deep dive into Holiday’s famously troubled existence, although there is no evidence to support these allegations.

Really, Billie isn’t so much a detailed account of the titular singer, but more of a chance for Kuehl’s previously-unheard audio interviews and personal research to finally see the light of day, and for fans of the singer’s life and music it’s bound to be a welcome if uneasy look into her life, as well as someone whose obsession with her may well have sealed her fate.

Kuehl’s recordings feature frank and honest interviews with several key figures such as Tony Bennett and jazz musician Count Basie, the latter of whom gave Holiday one of her first big breaks, as well as lawmakers, close family and friends, and even her old pimp from her earlier years. They all give vibrant testimonies as to how Holiday ascended in the industry, only for things to be undone by years of legal battles, drug use, abusive partners, and the occasional philandering with other men (and women). Erskine pins them all together in a coherent, if not always crystal clear, narrative to tell not just Holiday’s story but Kuehl’s as well, with testimony from the late journalist’s surviving family to fill in some of the gaps about what might have led to her untimely demise.

We have, in effect, two stories at play here about two women who were separated by time, but connected by a deep obsession with the truth, with Lady Day making headlines for her controversial song “Strange Fruit” which called out the historic racism of America in its uncomfortable lyrics, and with Kuehl diving as deep as she can into her findings to paint a clearer picture of the singer than anyone had yet tried. It’s an interesting parallel that would make for a fascinating dramatic feature, let alone a documentary, perhaps in a similar (if tonally different) way that Julie & Julia tackled the lives of both chef Julia Child and journalist Julie Powell. In the current format, though, Billie can often be a bit of a mixed bag; while the subjects are endlessly fascinating to learn about, the lack of cohesion between both storylines makes it seem a little disjointed, with the focus suddenly shifting from one figure to another at random intervals, and for unspecific lengths of time. Sometimes, it can seem as though some of it was slapped together haphazardly, which for a project centred solely on a collection of never-before-seen (or heard) material perhaps isn’t the best approach, and it does neither Holiday nor Kuehl any favours when their lives, not quite as well-known with the public, should be laid out a lot clearer than it is.

In its defence, the film’s unclear approach might be down to how Kuehl’s audio recordings aren’t always of the best quality. Of course, the journalist didn’t have today’s cleaner recording equipment back in the 1970s, so she was always going to have material that couldn’t be entirely easy to understand off the cusp, but in a film made for a modern audience who’s used to hearing clearer audio than nearly fifty years ago, perhaps some hard-of-hearing subtitles over the more difficult audio would have made all the difference. Otherwise, it can be tricky to determine some of the exact details of Holiday’s life as per Kuehl’s research, and aside from when certain moments in her career – such as her infamous targeting by the FBI for her drug use, a case soon to be dramatized in Lee Daniels’ upcoming biopic The United States vs. Billie Holiday – are spelled out for us, it’s hard to keep track of what’s actually being discussed.

However, the film remains certifiably intriguing, particularly whenever it explores some of the greater issues surrounding the overall treatment of black artists as opposed to white ones (a brief segment sees one interviewee complaining that someone like Tom Jones gets the bulk of credit for material created solely for and by black singers), and Kuehl’s initial findings are fascinating to read and listen to, serving a sense of justice after decades of her life’s work being kept under wraps. Billie is unlikely to be the definitive film account of the singer in question, but as a study of both Lady Day and the woman who became so compelled by her it may have cost her own life, it’s a compelling experiment that doesn’t entirely work yet keeps the peace for the sake of an interested audience.

Billie takes not just the life of famed African-American singer Billie Holiday but also the life of her doomed would-be biographer Linda Lipnack Kuehl, and meshes them together for an experimental documentary which doesn’t always work due to some audible issues and an uncertain focus, but makes for compelling viewing for fans of the singer nonetheless.

Billie was due to be out in cinemas across the UK on Friday 13th November 2020, but due to the latest government announcements those plans have been cancelled. It is currently scheduled for a DVD release later this month.