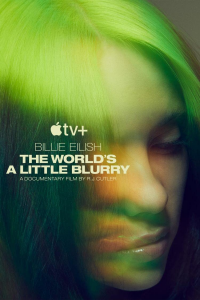 BASICALLY…: An intimate look at young music star Billie Eilish’s life and journey as she puts together her debut album…

Authenticity is hard to come by in today’s music superstars, with far too many of them churning out soulless autotuned earworms that dominate the charts and radio stations – but Billie Eilish, the nineteen-year-old sensation that’s taken the world by storm, easily bucks the trend.

Here is someone who, at thirteen, rose to online prominence following the release of her song “Ocean Eyes” on Soundcloud, and then a few years later recorded her debut album When We All Fall Asleep, Where Do We Go? with her songwriter/producer older brother Finneas O’Connell in the latter’s bedroom, which would skyrocket her to international fame and numerous awards success, including five Grammys in the same year. And yet, as filmmaker R.J. Cutler’s epic new documentary Billie Eilish: The World’s A Little Blurry shows, the young singer not only appears to have kept her grounded morals even as she’s performing sold-out concerts and headlining Coachella, but her unique approach to music and life in general brings something that numerous musicians nowadays simply don’t have, and that’s – you guessed it – authenticity.

Cutler’s film documents Eilish’s journey from online sensation to bona fide music superstar, incorporating some intimate and highly personal footage of her and Finneas recording that debut album in his bedroom, her touring across the country and the world, and performing to packed audiences at concerts and festivals everywhere. Spliced in throughout, though, are moments where we see Eilish just being her regular teen self, including maintaining a relationship with a guy known as “Q” and managing her numerous tics that result from her Tourette’s, all while her close relationships with her family – not just Finneas, but also her extremely caring and supportive parents Maggie Baird and Patrick O’Connell – keep her grounded and focused on living a balanced and healthy life without any of the trappings that come with young fame.

In the wrong hands, this film could easily have gone the way of many other music documentaries that serve as nothing more than vanity projects for the stars at their centre, but Cutler and his camera crew seek to capture many parts of Eilish’s journey that aren’t afraid to put her in a less-desirable light. There are parts where the movie gets real about her feelings of depression, many of which have inspired the songs she has become known for, and it will also show moments where she expresses great reluctance in partaking in basic actions like after-show meet-and-greets when she’s not feeling the vibe. It raises some interesting points about how much fame can overwhelm someone who at the end of the day is still rather young, something which has enveloped past young artists like Britney Spears, Miley Cyrus and Justin Bieber – the latter of whom shows up in one of the film’s most heart-warming moments as Eilish, a self-confessed superfan of the singer, cannot comprehend her idol standing mere feet away from her – and is certainly not overlooked here either. There is a distinct and refreshing lack of vanity in this film, which helps to create a more realistic dynamic where difficult topics like mental health are put on full-display, but none of it feels manufactured or manipulated by Eilish’s team in an effort to make her look any better; it feels very real, and props to the filmmakers as well as Eilish herself for allowing such raw humanity to shine through here.

If there was something to harp on about, though, it’s that the film is perhaps a bit too long. At nearly two-and-a-half hours, there is plenty of footage where Eilish tours the world, performs festivals, records her songs and spends time with her family, but it can be a little exhausting to sit there and take it all in for a rather unnecessary amount of time; there’s even an intermission at one point, as though the filmmakers probably knew that people would need a break by the mid-way point. It’s viable to suggest that some parts be cut out to make things flow a little quicker, but at the same time a lot of it is so enticing and watchable that it’s hard to know what exactly could be removed.

While fans of Billie Eilish will no doubt swoon all over this film, others will certainly be won over by its unflinching portrayal of a young superstar who, despite the incessant amount of fame, appears to have retained their humanity and grounded nature that makes them not just one of today’s most fascinating and unique artists, but one of the few that genuinely feels authentic in their approach and overall love for their craft.

Billie Eilish: The World’s A Little Blurry is a fascinating, if somewhat overlong, documentary that dives into the meteoritic but grounded rise to fame for the singer, which refreshingly lacks vanity and isn’t afraid to touch upon some of the darker aspects of young fame that has enveloped numerous other superstars of a similar age.

Billie Eilish: The World’s A Little Blurry is now available on Apple TV+.