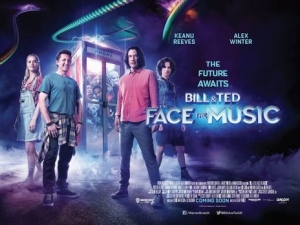 BASICALLY…: A middle-aged Bill (Winter) and Ted (Reeves) learn that they only have a short amount of time to write a song that will save the universe…

“What if Back to the Future, but with the two dumbest teens on the planet?” Surely this was the seed that soon sprouted into the cult classic Bill & Ted’s Excellent Adventure, which became an instant hit with audiences for its silly but delightful nature, and to this day – alongside its more creative yet less admired sequel Bill & Ted’s Bogus Journey – the series is a must for lovers of both sci-fi comedies and dumb teen movies.

Its long-awaited third entry, Bill & Ted Face the Music, continues the delightfully silly spirit nurtured by the first two films, and fans are in for a treat with a slew of returning characters, familiar plot lines, and of course the return of both Alex Winter and Keanu Reeves as the dudes themselves, Bill S. Preston, Esq. and Ted “Theodore” Logan respectively. Does it entirely work? Not always, but when you’re having this good of a time, why would you even care?

It’s been roughly twenty-five years since Bill and Ted (Winter and Reeves) last rocked the scene, with the two would-be rockers destined to create a song that would unite everyone across space and time. Unfortunately, they’re not even close to that goal; the former Wyld Stallyns are now middle-aged men, with only their music-loving daughters Thea (Samara Weaving) and Billie (Brigette Lundy-Paine) among their biggest fans, and even their wives – former English medieval princesses Elizabeth (Erinn Haynes) and Joanna (Jayma Mays) – are starting to feel unsatisfied with their mundane lives. Just when all hope seems lost, a visitor from the future – Kelly (Kristen Schaal), the daughter of their old friend Rufus, played by the late George Carlin – informs them that all of time and space is on the verge of collapsing entirely within the next 70-odd minutes, unless Bill and Ted can write their prophesised song within that time. They resolves to go on another adventure across time to find a version of themselves who do indeed have the song, while Thea and Billie – eager to help their fathers create the song – venture through time themselves to assemble a band of history’s most influential musical figures.

The film is a labour of love for a lot of people involved, from original writers Chris Matheson and Ed Solomon, who had spent the last decade trying to secure funding from reluctant studios, to the two main stars themselves, with Alex Winter taking acting lessons to get himself back in the frame after a career spend directing, and Keanu Reeves – despite his A-list status, especially after the success of the Matrix and John Wick movies – publicly stating his eager enthusiasm to return to his star-making role. The passion is certainly felt in the writing and performances, which are near identical to the zany and goofy spirit of the first two movies, and you can tell that everyone involved legitimately wants to be there, as opposed to a contractual obligation towards a franchise they’d rather do anything but at this stage. It’s almost inspiring to see these people who clearly adore these characters and this universe return to them without ever feeling like they’ve spent any time apart, and whether you’re eager for some of that time-bending writing by Matheson and Solomon, or a couple of lively performances by Reeves and Winter, you’ll be just as glad that you’ve been able to revisit these things as they have.

There’s plenty of fun to be had from the central time-travelling antics, particularly as Bill and Ted visit several future versions of themselves which are at times unexpected but always thoroughly hilarious (hearing both Keanu Reeves and Alex Winter commit to phoney British accents as two such future incarnations is pure comedic bliss). Even the secondary plot involving their daughters, which combines plenty of elements from the first two films from the travelling through time to meet many historical figures, to even venturing to the afterlife – and yes, William Sadler is also back as Death – is a plentiful and giddy viewing experience, rehashing aside. The only thing this film appears to be missing as opposed to its two predecessors is a sense of visual awe; the sets and cinematography in those films were strange and surreal enough to suggest an other-worldly vibe, like you’ve stepped into some kind of alternate reality, whereas here most of the sets are largely green-screen with bucket-loads of CGI in the background which looks noticeably more artificial than the practical sets, and the cinematography is a lot more stationary and not as inventive as it could have been. Director Dean Parisot – previously of Galaxy Quest – is apt enough to ape the humour and heart of the originals, yet he doesn’t appear to have been as willing to experiment with the overall style as much as he could have, which is a slight shame.

No matter, though, because at the end of the day Bill & Ted Face the Music is a delightfully fun movie with lots of laughs, silly characters (we didn’t even mention the insecure robot in this review), and a great big heart that’s pumped by the clear passion put into it by its creative forces, among them two lead actors who slip back into their iconic roles with alarming ease. It might not be the note-perfect sequel some fans might have hoped for, but for anyone else wanting some fun in the cinema during these very serious times, this is by far the least bogus choice you could make.

Bill & Ted Face the Music is a delightfully silly continuation of the two time-travelling friends’ quest to unite the cosmos, in a labour of love that lead actors Keanu Reeves and Alex Winter, along with original writers Chris Matheson and Ed Solomon, clearly put a lot of passion into, which shows in a film that keeps as much in the spirit of the first two films as it possibly can, making for a funny, heartfelt, and overall fun movie to watch. As Abraham Lincoln would say: Party on, dudes!

Want to decide what the movie’s like for yourself?
Check out Bill & Ted Face the Music showtimes in London
via