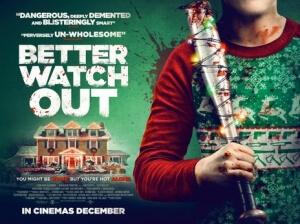 BASICALLY…: A simple night for babysitter Ashley (DeJonge) and the precocious 12-year-old she’s looking after (Miller) is made far more horrifying by a home invasion which isn’t as straightforward as it seems…

If you’re the kind of person who watches Home Alone every Christmas, and views it as something that’s far more sadistic and blood-hungry than the otherwise family-friendly film lets on, then you probably need counselling – and if that doesn’t work, then you might as well go see Better Watch Out because it will satisfy your highly questionable tastes that seemingly can’t be gotten rid of.

In director Chris Peckover’s devilishly cruel and unnervingly watchable festive horror, teenager Ashley (Olivia DeJonge) has been called over to babysit for her neighbours’ twelve-year-old son Luke (Levi Miller) for the night. Luke, however, is a bit of a creep, as is his friend Garrett (Ed Oxenbould), because not only do they have some rather explicit sexual thoughts about Ashley, but both of them – Luke especially – are displaying some extremely odd and disconcerting behaviour, such as partaking in underage drinking and smoking, all while trying to impress their older babysitter. However, when it appears that someone is eager to get in to the house and terrorise the living daylights out of the three of them, they must all try and avoid their would-be captors… and honestly, that’s all you need to know about the plot. To say anything further would seriously spoil the surprise, but trust me when I say that it goes into areas that are seriously messed up, and it works best when you know as little about it as you possibly could.

What can be said about Better Watch Out that’s fairly spoiler-free, however, is that it’s an uncomfortable watch which doesn’t take any shortcuts when showing its far more sinister side. Think of it as if Home Alone somehow crossed its genes with Funny Games, and you should get a pretty clear image in your head of what this movie is probably like (though, thankfully, without any infuriating fourth-wall breaking deus ex machinas like in the latter). There are lots of scenes that gleefully relish in its underlying cruelty and sociopathy, and you are seriously rooting for the victims to escape this horrific situation and run towards safety, while simultaneously wanting the villains to seriously get what’s coming to them because they are so twisted and evil.

Peckover really adds true suspense to scenes whenever it’s called for, even though there are still a few dumb jump-scare moments early on in the film that add little to nothing to the rest of the film. The acting is fairly solid from just about everyone, though you do get the odd over-the-top performance from certain players that come dangerously close to delivering a caricature rather than a believable human character. And when the film suddenly decides to take a far more violent turn, boy howdy it becomes seriously demented, especially a scene of torture that seems to have come from the mind-set of someone thinking to themselves, “What if Kevin McCallister had watched Saw before the robbers tried to break into his family’s house?”, and follows through on that insane type of thinking.

It is a cruel, unpleasant but surprisingly entertaining horror film that perhaps isn’t as smart or as game-changing as other Yuletide thrillers like Silent Night, Deadly Night, Gremlins or Krampus, but is sure to be a reserved bit of bloody fun for anyone desperate to seek out a new scare-fest to go out and see every time Christmas comes around. Best be warned, though: chances are you’ll never really see a particular scene of slapstick from Home Alone in the same way ever again after watching how it’s paid tribute to in this film.

Better Watch Out is a festive horror film that revels in its cruel and sadistic nature, but also has a surprising entertainment factor to it that prevents it from being too unpleasant to watch.