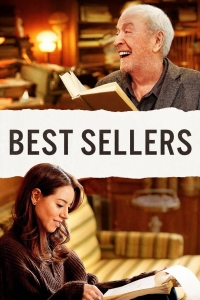 Aubrey Plaza’s track record of sharing the screen with much older co-stars isn’t the brightest, especially since five years ago she embarrassed herself in front of the world by lusting after Robert De Niro in the equally-embarrassing Dirty Grandpa. Luckily, though, at no point in Best Sellers does she have the hots for Sir Michael Caine, which saves both of them from a wave of humiliation, but at the same time would have perhaps given this rather meandering film a bit more of an edge to it.

The story sees Plaza play Lucy Stanbridge, the daughter of a respected book publisher who is struggling to keep the family business afloat after its latest release underperforms. Lucy and her assistant Rachel (Ellen Wong) soon discover that an old contract binds them to an author named Harris Shaw (Caine) who, after publishing his first and only best-selling novel through the firm years prior, has become a bitter recluse – and now, handily, owes them a book to publish. Shaw reluctantly dumps a manuscript on Lucy’s desk, and she promptly arranges a book tour which he begrudgingly participates in, gaining an online following for his unfiltered remarks and repeated utterances of the word “bullshite”. However, the publisher and her unruly client eventually reach an understanding, and form a respectful bond that changes both of their outlooks on life.

As a film where the central mismatched pair form an unlikely friendship, Best Sellers stays well in its lane. It’s easy to tell when and how certain things are going to play out, and given the state of one character who looks rather rugged and dishevelled throughout, it is also not a surprise when the film tells us that there’s something else going on with them that they’re choosing to hide for whatever reason. Director Lina Roessler and writer Anthony Grieco – both making their feature debuts with this film – aren’t able to give the viewer enough of a compelling reason to stick with, or even care about, this unambitious story where you can identify certain arcs and personalities well before the movie makes them known, and are executed in about as pedestrian a fashion as they are written to be.

It is only because both Michael Caine and Aubrey Plaza are such great actors that their characters have much more life to them than they do on the page. Caine is clearly revelling in playing such a cantankerous old bastard who pees on his own book and yells the word “bullshite” at every available opportunity, while Plaza dials down her trademark sardonic delivery for a rather invested performance which, like her standout turn in Black Bear earlier this year, proves that she is just as formidable in dramas as she clearly is in comedies. However, take both these actors away and you have characters who don’t even come close to capturing the zest of life that Caine and Plaza give them. Their roles are thinly-disguised archetypes of the buddy formula that Best Sellers desperately wants to stick with: she being the tightly-wound businessperson who needs to learn how to care about something greater than herself, and he being the eccentric but surprisingly wise old sage who rediscovers his passions and humanity thanks to his on-screen partner’s efforts. There’s nothing fresh about these characters as described, other than the spirited performances that are accompanying them.

The movie also has a problem with setting itself a firm tone, which the trailers for this film are really not doing a great job at representing. The zany, wacky humour that the promos suggest – from Caine assaulting a cameoing Cary Elwes as a pretentious book critic, to Plaza aiming a shotgun at a guy from her desk – never gets any crazier than those all-too-brief moments, and by the third act it has morphed into an oddly treacly drama which is a far cry from the drier, lightly-comedic pace it was apparently setting for itself. It feels like neither Roessler nor Grieco could settle on a coherent voice for their project, leading to not only a meandering and unengaging final product, but trailers which – regardless of the film’s quality – misrepresent it so much that it feels like somebody in the marketing department is going to get a stern talking-to.

For all of its non-starter mediocrity, at least Caine and Plaza are both good in the movie. The two of them definitely deserve stronger material than Best Sellers, which makes them all the more admirable as performers if they can work their way through bullshite like this with their dignity still intact.

Best Sellers is an unfortunately mediocre attempt at a mismatched comedy-drama which features an inconsistent tone and unengaging narratives, wasting the strong efforts of both Michael Caine and Aubrey Plaza.