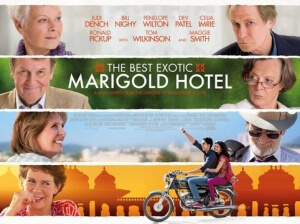 be very pleased to know that a follow-up is not only confirmed, but shooting right now in India!

The original 2012 film, based on Deborah Moggach’s book These Foolish Things, saw a group of senior British citizens – including Judi Dench, Bill Nighy, Tom Wilkinson, Maggie Smith, Penelope Wilton, Ronald Pickup and Celia Imrie – hightail off to India to live at the rundown retirement home of the title, run by the energetic Dev Patel. It was adored by audiences and critics, and we at Film Feeder thought it was decent enough to make charming entertainment.

Director John Madden (Shakespeare in Love) and writer Ol Parker (Now Is Good) are returning to respectively direct and write the sequel, as are cast members Dench, Nighy, Smith, Wilton, Pickup, Imrie and Patel, among a few others. Joining the ensemble this time round are Richard Gere (Arbitrage), David Strathairn (Good Night, And Good Luck) and Tamsin Grieg (Episodes).

According to the official press release by distributor Fox Searchlight, The Best Exotic Marigold Hotel 2 will see Sonny (Patel), the young owner of the hotel, set into motion an expansionist plan after the roaring success of his property, which threatens to overlook his impending marriage to long-term girlfriend Sunaina (a returning Tena Desae). Meanwhile, there’s new adventures in store for its residents: Evelyn and Douglas (Dench and Nighy) has joined the Jaipur workforce, but wonder what lies ahead of them as a couple; Norman (Pickup) and Madge (Imrite) juggle two very different relationships; co-manager Muriel (Smith) keeps everyone’s secrets in check; and new arrivals Guy (Gere) and Lavinia (Grieg) meet after a scheduling error.

Now shooting in the luscious landscapes of India, and aiming for a possible early release next year, The Best Exotic Marigold Hotel 2 aims to continue the story without treading into old terrirtory (no pun intended). Let’s just hope it’s as universally pleasing as its predecessor….