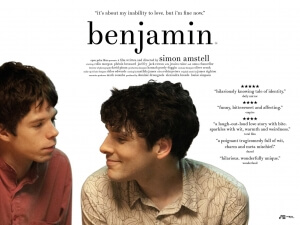 BASICALLY…: Benjamin (Morgan), a rising filmmaker, finds his world thrown for a loop due to a burgeoning romance and the upcoming screening of his second feature…

There is no shortage of stand-up comedians that have tried their hand at filmmaking – Woody Allen, Chris Rock and Ricky Gervais are just a few of the many – but perhaps not many of them have been quite as restrained, thoughtful and even progressive in their debuts as Simon Amstell undoubtedly has.

Amstell, best known to UK audiences as the regular host of shows like Popworld and Never Mind The Buzzcocks, not to mention the co-creator of short-lived sitcom Grandma’s House as well as a popular stand-up comedian in his own right, has made his feature writing and directing debut – he had previously made the BBC mockumentary Carnage – with a delightful little film called Benjamin, which offers a sweet, heartfelt, and sometimes brutal examination of several topics including depression, self-doubt, the pretentiousness of the art world, and the somewhat sociopathic inability to love – all with a winning sense of humour and a light touch from Amstell that makes it extremely digestible.

The Benjamin of the title is a filmmaker played by Colin Morgan, who is fighting nerves as he is putting the finishing touches to his sophomore feature, some years after the debut of his award-winning first feature, in time for its debut at the London Film Festival. Deep down, he knows that the film he’s made is a pretentious, artsy mess – a monk shows up to give spiritual advice for no reason in this film-within-a-film – but no-one else around him is willing to say it out loud, leaving him somewhat trapped in his own self-hatred. His spirits are lifted, though, when he meets young French musician Noah (Phénix Brossard) at a launch party for a chair, and the two very quickly fall for each other; however, things begin to take a toll for Benjamin following the disastrous premiere screening of his new film, and soon his insecurities threaten to derail his blossoming new relationship.

Amstell clearly takes inspiration from parts of his own life to build the characters and scenarios in his film; his protagonist, like Amstell himself, is gay and also mentions he’s vegan, he has a friend played by Joel Fry who’s also a stand-up comedian (though perhaps doesn’t reveal material quite as devastating as Fry’s in this film), and as Amstell once did in real life Benjamin is also present while watching an extremely pretentious art show involving Game of Thrones’ Ellie Kendrick and a giant sheet of paper. His autobiographical tendencies, however, do not overshadow the raw emotions of his central love story, which is carefully paced with such warmth and genuine passion, and also captures a very real – almost too much so, sometimes – set of human flaws when dealing with the lead character’s growing insecurity, which hit even harder when you see how well these two men seem to fit with one another. His two main actors also sell their characters’ relationship with amazing ease; Colin Morgan, once you get over the fact that he kind of looks like a cross between Benedict Cumberbatch and Freddie Highmore, is a perfect Amstell surrogate, one who’s very likeable and also sympathetic, even when you feel as though his character’s moping and anxiety can sometimes be self-serving; meanwhile, Phénix Brossard really gives his character a real sense of humanity as well as vulnerability, seeing how he’s noticeably more youthful than Benjamin is, but clearly has a deep burning desire within him.

As you might also expect from a film by a comedian, the movie is often very funny as well, especially when it’s taking several stabs about the pretentiousness and plastic nature of certain aspect of the creative arts. In addition to feeling out of place at launch events for chairs and Ellie Kendrick kicking her leg through a sheet of paper for the sake of art, Benjamin is frequently subject to scrutiny and psychological humiliation from various figures he comes across; Harry (Jack Rowan), his self-involved co-star in the movie he’s putting together, seduces him whilst spouting off his nonsensical visions for a movie he wants Benjamin to co-write which involves the colour red and a swan; his pre-film introduction before the film’s showing at the Curzon Soho in London is painfully awkward; and in an amusing cameo from Mark Kermode he listens to the critic completely tear apart his work like it’s nothing. Though these depictions are largely done for comedic effect, the severity of their brutality feels all too real and therefore much more satirical and even darker than one might expect; anyone who’s had a film go through this kind of treatment in the industry must surely know how painful and even unbearable it can be to watch the film they’ve worked so hard on be ripped to shreds so quickly, and Amstell manages to get us to both laugh at these particular circumstances, but also be reminded of how sad it can all be as well.

When it isn’t being a rather brutal satire of the film industry, and a funny and effective one at that, it’s much more rewarding as a straightforward romantic drama and character study, with the main character going through relatable feelings of anxiety while also struggling with his own feelings for other people that threaten to alienate him from everyone else, and how he tries to overcome that through a meaningful and endlessly sweet fling with this young, likeable young French musician. No matter what sexual orientation you identify as, you will feel there’s something you can find in Benjamin that accurately reflects your own feelings and emotions, and that really is Amstell’s greatest success; finding a truly human presence in his story and not only getting us to laugh along with it, but to also greatly feel for it as well.

Benjamin is a sweet and affectionate debut feature from writer-director Simon Amstell, who not only offers a humorous takedown of the pretentiousness of the art world, but also a winning and deeply sympathetic love story that anyone can identify with.