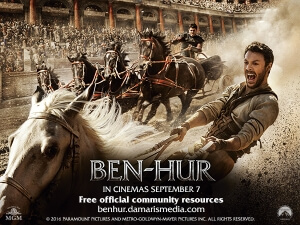 BASICALLY…: Judah Ben-Hur (Huston), a Jewish nobleman who is betrayed by his adoptive brother Messala (Kebbell) and forced into a life of slavery, seeks revenge on his former friend by competing in a chariot race…

I remember when news first broke of there being a new version of Ben-Hur in the works, and like with most new versions of things in Hollywood, people were enraged. “How dare they touch that masterpiece?” they cried in their message boards, as well as “how could they remake something so sacred and so untouchable?” Obviously, these people were oblivious to the fact that Ben-Hur has existed in countless other productions over the years, not least because the original source by General Lew Wallace is public domain. In fact, the one that everyone seems to remember – the 1959 epic with Charlton Heston which won 11 Oscars – is also technically a remake, since there were at least two silent films based on the religious book before it, as well as even an ambitious (for the time) stage play.

Timur Bekmambetov, a director I’ve actually enjoyed in the past (albeit in a guilty pleasure type of way) with intentionally bonkers films like Wanted and Abraham Lincoln: Vampire Hunter, turns out to not be particularly skilled when he’s meant to be tackling wholly serious material. He directs the classic tale of Judah Ben-Hur (Jack Huston), a young Jewish nobleman in the city of Judea who seems to live a good life, with a good family and a good relationship with his hot-headed adoptive brother Messala (Toby Kebbell). However, disaster strikes when Judah is wrongly accused of a serious crime, and Messala – now a stern Roman tribune – sentences him and his family to a life of imprisonment and slavery. After five years of rowing a boat for the Roman army, Judah escapes and swears revenge against his former friend, something that a new friendship with Sheik Ilderim (Morgan Freeman) and his handy connection with chariot racing will soon prove useful for.

It’s completely pointless to compare this film to the more famous 1959 version, as a) there are many other versions out there of the story, including a TV miniseries and even an animated film, and b) that film wins as many arguments as it did all those Oscars. Here, Bekmambetov has just taken the bare essentials of the original story and done exactly nothing with them, leaving us with a rather vanilla version of this classic story, one that no longer feels relevant or ground-breaking as this basic template has been remoulded and retold countless times in other stories by this point. Like with John Carter a few years ago, the story that inspired some of the more famous ones that followed it ironically now has no place in this day and age, and it’s rather a shame because if you do ever get around to watching the 1959 version, you’ll see exactly why it’s a classic story to begin with. Unfortunately, this is just a straightforward version that does nothing new with the material, and is all the more dull and boring because of it.

“Dull and boring” is not what I was expecting to see out of Timur Bekmambetov’s Ben-Hur, because once again I enjoyed some of his previous work because of how insane and enjoyably stupid they were, and was rather hoping this would at the very least fall more into that category. However, in this case, the material he is working with is far too serious for his tastes, especially as this is a Christian story meant for Christian audiences (Jesus himself even shows up at several points, played by Rodrigo Santoro as perhaps the most nonchalant – and somehow Spanish-sounding – depiction of the Messiah yet put on film) and thus cannot really be played for dumb laughs as Abraham Lincoln: Vampire Hunter was. You can tell that he’s at least trying to raise the campiness a little bit, but more the 300 type of campiness, particularly when Morgan Freeman shows up in dreadlocks that make you wonder whether he’s either playing a sheik, or Whoopi Goldberg auditioning for Sister Act 3: This Time They’re Jewish. Even the chariot race, arguably the centrepiece of any Ben-Hur adaptation, gets some unintentional laughs in this version, from the awkwardly rendered CGI horses and crashes, to an Arab racer actually yelling “I kill you!” to another racer, like he was doing an Achmed the Dead Terrorist impersonation. But it simply isn’t enough to elevate the material from being as blandly told as it is here, and once again it’s just a dull and boring sit with some occasional moments of unintentional hilarity.

Something else I want to bring us as well is the cinematography in this movie, and how surprised I was at just how jaw-droppingly bad it could be. You have all these sets and locations being constructed to recreate one of the most epic stories of all time, and yet all the camera wants to do is to zoom in on the characters’ faces as much as possible. Almost half the movie is comprised of extreme close-ups of Jack Huston’s face, and if not his then somebody else’s, and all that effort that seems to have gone into making what are actually some well-made sets has gone to waste because the cinematographer not only focuses more on close-ups than establishing shots (some scenes go by without the audience even knowing where we’re meant to be), but also shaking the camera so much that it makes a lot of the action scenes, or even some of the quieter moments, impossible to watch. Incidentally, Bekmambetov also served as a producer on Hardcore Henry from earlier this year, and while the shakiness of the camera isn’t as vomit-inducing here as it was in that ugly monstrosity, it’s still pretty damn incomprehensible at times, and it ruins the momentum as you’re trying to invest yourself into this world and characters, but can’t because you can’t even see them half the time.

For what was meant to be a good-intentioned new adaptation of a classic story, Timur Bekmambetov’s Ben-Hur has ended up being an unholy mess, one that even wastes its potential to be another enjoyably dumb guilty pleasure from this director, and is just unenjoyably dumb.

Ben-Hur is an update of the classic General Lew Wallace story that wastes most of its potential as another enjoyably dumb guilty pleasure movie from director Timur Bekmambetov, and instead is just a vanilla rendition that does nothing new with the material, except ruin potentially strong moments with awful cinematography and an approach to the story that is just dull and boring.