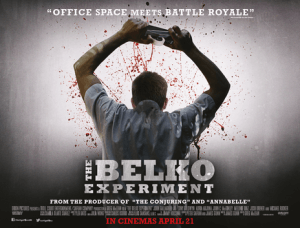 BASICALLY…: An office building is suddenly locked down, and the trapped workers are forced by a voice on the intercom to kill their fellow employees…

One of the most enjoyable aspects of The Belko Experiment is that you know exactly what you’re in for when going in, yet you still leave feeling quite surprised by it. It is a film that proves to be just what you might think it would be – a gory exploitation movie that is accurately being described by critics as The Office meets Battle Royale – but then upon exiting the cinema you find yourself shocked at how much you really enjoyed it, despite its obvious sadism and over-reliance on brutal, animalistic violence.

The set-up is simple, but imaginative – an office building in rural Colombia is suddenly locked down one day, with the doors and windows bolted by steel shutters, and a voice on the intercom tells the employees trapped inside that unless a certain amount of people are killed within a short space of time, even more people will die. Carnage, of course, quickly ensues; but the imagination comes from writer James Gunn and director Greg McLean’s ability to wonder what an office building would be like as a war zone, with bodies dropping left and right, and people brandishing weapons to brutally murder anyone who’s unfortunate to cross their path. This is a scenario where the boss will coldly shoot you in the head without a moment’s hesitation, the office creep will carry a meat cleaver and slash people with a sadistic and pleasurable grin on his face, and people you get to know and like will suddenly be killed off like cattle. All this, and more, make for one hell of a devilishly fun ride.

Gunn is one of those creative talents who, whether he’s writing or directing, will just sink so much energy and humour into dark films like Slither or Super, or more family-friendly projects like Guardians of the Galaxy or even the two Scooby-Doo movies that he wrote. With his script for The Belko Experiment, you can just hear the devilish glee from behind the keyboard as he’s writing it, as these characters are all so much fun to watch be either helpless victims or murderous psychopaths, and the story is simple and easy enough to follow that it never becomes overly manic or complicated. It’s an immensely fun screenplay, and it’s brought to life by McLean who recognises both the disturbing aspects of Gunn’s script as well as the darkly funny ones, and gives each moment the appropriate tone it deserves without ever feeling too jarring. McLean has certainly made some questionable horror films in the past, whether it be last year’s The Darkness or the follow-up to his breakout hit Wolf Creek, but this is one of his most tightly-constructed and straightforward, and the film benefits greatly from his more focused and entertaining direction.

They’ve also recruited a fantastic ensemble cast made up of character actors that know exactly what kind of film they’re in, and just go all out whenever they can. You’ve got actors like Gunn regulars Michael Rooker and Sean Gunn popping up in small roles, but also John C. McGinley being creepier than you’ve ever seen him (and that’s before he’s even wielding that meat cleaver), John Gallagher Jr. being a strong lead and moral compass, and Tony Goldwyn as perhaps the scariest bastard in the entire film, all of whom give it their all and hit bullseye more than once. It is a who’s-who of people getting slaughtered left and right, and it’s not always predictable who’s going to suddenly be the one to die; their intense performances keep you hooked for long enough so that when the time does come, you more often than not don’t see it coming in such a horrific and gruesome way.

It’s a mesmerising slice of exploitation cinema that never gets old, boring, or even that unpleasant, and it’s at such a tight pace that by the time the movie is over you’re shocked by how short it actually was (again, this is just under an hour and a half), but also sad that there’s no more blood-soaked gore to be fascinated by. It’s one of the few times I’m hopeful there’s a sequel, because by God, after a huge splash such as this, who knows where something like this would go next?

The Belko Experiment is a wildly entertaining exploitation film that’s fuelled with a penchant for gory violence and executes it spectacularly, thanks to a fun script by James Gunn, solid and focused direction by Greg McLean, and a strong ensemble of character actors that know fully what kind of movie they’re in and pull it off rather beautifully.