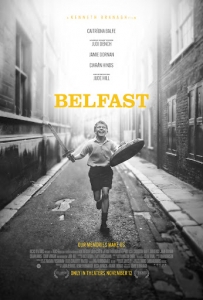 BASICALLY…: A young boy (Hill) grows up amidst The Troubles of 1960s Northern Ireland…

This review of Belfast was conducted as part of the BFI London Film Festival 2021.

For directors, semi-autobiographical tales are all the rage during awards season. Alfonso Cuarón won several Oscars for his touching black-and-white reminiscence Roma, John Boorman was nominated for his wartime childhood epic Hope and Glory, and even Steven Spielberg is currently developing a movie based on his own experiences as a youth, which has gotten award pundits intrigued before it has even shot a single frame. Rather than be cynical about their strong chances for Oscars, however, it is encouraging to see many filmmakers tell much more personal stories that are bound to strike more of a natural chord with audiences than the next big studio blockbuster.

Now, it is Kenneth Branagh’s turn to dive into semi-autobiographical territory, with his endearing and passionate project Belfast – which, of course, is shaping up to be a major contender for next year’s awards cycle. It would certainly be a deserved position, for the film is a real crowd-pleaser, filled with love, laughs, and true honesty about a dark period in history as seen from the eyes of a child too young to understand most of it.

Predominantly shot in black-and-white, Branagh’s Belfast is set in 1969, within a friendly working-class neighbourhood in the titular city in Northern Ireland. It is the home of young Buddy (in a sparkling debut by young actor Jude Hill), who lives with his mother (Caitríona Balfe), father (Jamie Dornan), brother Will (Lewis McAskie) and grandparents (Judi Dench and Ciarán Hinds), and spends his reasonably happy childhood playing in the streets with other local kids, including his slightly older friend Moira (Lara McDonnell, who previously worked with Branagh on last year’s awful Artemis Fowl, to date still the director’s worst feature). However, reality comes crashing down when nationalist Catholics begin targeting unionist Protestants, signalling the start of the decades-long conflict known best as “The Troubles”, and forcing Buddy and his family to navigate a much more dangerous world than they know, all while deciding what the most logical next step in their lives should be.

For young Buddy, though, the conflict is a minor barrier for what he feels really matters, like going to the pictures with his family to see films like Chitty Chitty Bang Bang and One Million Years B.C. (one of the few instances where colour bursts onto the screen), or impressing the pretty young girl in his class at school. Branagh’s literal childlike perspective offers a simple but effective look at the historical significance of The Troubles, just as Boorman’s Hope and Glory saw the devastation caused by the Second World War through the eyes of its own youthful protagonist, but Belfast is the kind of film that doesn’t set out to politicise the conflict but more so just show what it must have been like to grow up in the middle of such a thing. In that regard, Branagh grandly succeeds at making a charming, heartfelt and loving ode to his childhood home where every main character is sparking with life and passion, and where the actor-turned-filmmaker genuinely feels a strong connection to, as seen with its vast shots of Belfast life during the opening montage.

Branagh gets some great work out of his actors, led by young star in the making Jude Hill who, at age 11, has an extremely profound screen presence that’s cheeky, sweet and hearteningly mischievous (one scene sees him attempt to rob a chocolate shop with his friends, only to run out with a box of Turkish Delight which nobody even wants). He is surrounded by acting giants, least of all Judi Dench and Ciarán Hinds who steal whole scenes as his loving grandparents, and who served as a real high point for me because they really did remind me a lot of my own grandparents when they were together, which did get me a little emotional. Also great here are Caitríona Balfe and Jamie Dornan, who have their own issues to deal with like being in serious debt and keeping the peace in the community during the violence – Dornan is constantly harassed by local gangster Billy (Colin Morgan) who wants to use the chaos to enforce his order – but they have a real connection with one another, which helps them through even the toughest of spots in their marriage and family lives. Dornan even gets to croon a jaunty number which, for those who wanted more of his singing after Barb and Star Go to Vista Del Mar, should be enough to warrant serious awards consideration in the coming months (also, it goes without saying but he is far more charismatic here than he ever was as Christian Grey).

The movie isn’t fixated on a plot as such, and is more of a slice-of-life experience than anything, but even that provides Branagh with enough material to give the viewer a satisfying look at life the way he partially remembers it. Working with regular collaborators like cinematographer Haris Zambarloukos, as well as newer faces like Northern Ireland native Van Morrison who provides the score and soundtrack, he is able to capture a dream-like vision of Belfast that’s a healthy mixture of romanticised nostalgia and gritty hand-held realism. The movie was shot during the height of the pandemic last year (and there are parts like some establishing shots of the city where you can tell that was the case), so a lot of the sets and angles seem limited as a result, which only adds to both the wistful nature of the fractured storytelling and also the central idea that this boy’s home, or the only place he’s ever known as such, is a contained world all of its own.

Audiences are bound to fall in love with this film (and they already are: it won the People’s Choice Award at the recent Toronto Film Festival, which is often a strong indicator for what will at the very least be nominated for the Best Picture Oscar each year), and for good reason: Belfast is a headstrong, charming and utterly delightful coming-of-age drama that will win a lot of people over during the next crucial few months.

Belfast is an endearing crowd-pleaser from filmmaker Kenneth Branagh, who brings strong doses of life and charm to his semi-autobiographical film along with his excellent ensemble, which should make it a strong audience favourite.

Belfast will be released in cinemas nationwide on Friday 25th February 2022 (as of publication).