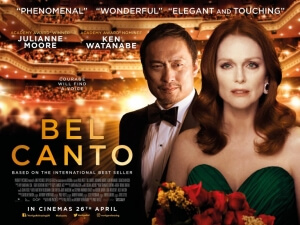 BASICALLY…: A group of dignitaries and socialites are held hostage by guerrilla mercenaries in South America…

When describing Bel Canto, the hostage drama based on Ann Patchett’s novel of the same name, the easy thing to do would be to compare the film’s dull, tedious nature to being trapped in an actual hostage situation; a cheap jab, I know, but honestly the movie is so unexciting and with little worthwhile drama that it is the only way to really describe it.

With that in mind, Bel Canto is very much like being trapped in a cinema against your will, watching something that should be exciting or at the very least interesting, but really isn’t and is instead an awkward, mostly flat soap opera that wastes a talented cast on material that could easily be re-named Stockholm Syndrome: The Movie.

Set in 1996, Tokyo businessman Katsumi Hosokawa (Ken Watanabe) travels to an unnamed South American country for a private concert in honour of his birthday, and to also potentially build a new site in the area. However, he has no intention of building anything; he’s just there so he can fangirl over the headline act, American opera singer Roxanne Coss (Julianne Moore), and spend the evening with several dignitaries. The night comes to an abrupt end, however, when rebel guerrillas storm the building and take everyone hostage, demanding the release of several incarcerated freedom fighters in return. As the days go by, and negotiations between the guerrillas and Red Cross representative Joachim (Sebastian Koch) sour, the hostages have little choice but to make the most of their current situation, which includes becoming friendly with each other – and, eventually, their captors.

It’s hard not to think of Stockholm Syndrome when you see these hostages slowly becoming friends with these armed militia types, which makes a lot of those scenes more disturbing than genuinely endearing; it’s hard for us to sympathise with the captors, no matter how hard they try to make them come across as sympathetic, because at the end of the day they are still using violent, and sometimes fatal, means to get what they want, and to be expected to find common ground with them as the captives seem to do is an unnerving notion that is not well executed enough to achieve. Then again, it’s hard for us to sympathise with the hostages as well,  because most of the actors playing them have been given very little to work with, other than to always look under pressure while staring down the barrel of a gun, and they are just too bland and boring to really care about. Julianne Moore, though, is given probably the most embarrassing role of the lot; clearly just killing time until Gloria Bell comes around, her performance just consists of being standoffish and passive-aggressive with her captors with barely any character or spark to her whatsoever, and you can’t help but feel her genuine talents just sitting there in the corner collecting dust as you watch her in this. Worst of all, she sings; not Moore herself, mind you, but her singing voice is provided by real-life opera singer Renée Fleming, and it is the most unconvincing lip-synching you’ve seen in a major motion picture since they tried dubbing over Val Kilmer in The Snowman. The voice never feels like it’s coming out of the mouth of this person on-screen, and there are parts where you can clearly catch Moore missing a couple of vocal cues; why they left that in the film, or even why they didn’t just cast Fleming herself in the role and be done with it, is a baffling miscalculation.

These flubs are a lot more interesting to talk about than anything else in the film, which is the poor result of finding out what Die Hard would be like if John McClane never showed up; you’re left watching this dull, lifeless hostage drama where nothing happens for the vast majority of it, with characters you really don’t care about, and drama that could have easily been placed into any cheesy telenovela and still be considered too far-fetched. Seriously, the biggest conflict in this entire film is trying to talk an embarrassed guerrilla down from a tree; that’s the highest level of drama that happens here, along with maybe one or two out-of-nowhere romances, one between Moore and Watanabe, and the other between Watanabe’s translator and a female member of the militia. Not even they come to life in the way the movie clearly intends, because it’s such stilted storytelling that these romantic pairings more often than not don’t make much sense, other than the fact that it’s just convenient for what little of a plot there actually is.

It’s only in the last ten or so minutes that the movie finally picks up considerably, but by then it’s too late; we’ve been so uninterested in everything that’s happened for the past 90-odd minutes that an abrupt and anti-climactic ending is actually welcomed, because at least it’s something to take an interest in. If the movie had previously been somewhat meaningful, then maybe this ending would have had much more of an emotional impact, but this is a real slog to sit through with uninspired drama, wasted talent, and an almost laughable lack of any genuine intrigue that makes it at the very least worthwhile.

Again, the easy thing to do would be to say watching a movie as dull as Bel Canto is akin to being trapped in an actual hostage situation, but if the movie doesn’t make any effort to do something different, then why should I?

Bel Canto is an extremely dull hostage drama that really does feel like you’re held there against your will as you watch it, with stale drama that would be considered too ridiculous even for a telenovela, talented actors being completely wasted in thin and sometimes embarrassing parts – Julianne Moore gets the shortest end of the stick, with a terribly-executed lip-synching job on top of everything – and a laughably miniscule amount of actual conflict throughout most of it.

Check out Bel Canto showtimes in London
on Walloh.