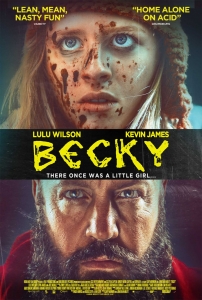 BASICALLY…: A teen girl (Wilson) must save her family from being held hostage by a group of violent escaped convicts…

It’s easy to understand why Kevin James would suddenly embrace the role of a neo-Nazi; after all, appearing in several Happy Madison productions from Paul Blart: Mall Cop to Grown Ups (and their respective sequels), not to mention the likes of I Now Pronounce You Chuck and Larry, Zookeeper and Pixels, would make anybody want to eradicate several ethnic groups in the name of white supremacy.

Genocidal jokes aside, though, James’ casting as a murderous convict with Nazi symbols tattooed all over his body is undoubtedly the element that’s going to make most people curious about Becky; how could someone so synonymous with low-brow slapstick comedy fare in what is unmistakably an against-type casting coup? The good news is that James – in a role originally meant for, of all people, Simon Pegg before scheduling conflicts forced him to surrender it to the current actor – handles the darker material pretty well; he’s an intimidating presence, unafraid to go all-out maniacal in scenes where he’s torturing or coldly murdering people, and holds entire scenes together with his brutish display of psychopathy alone.

Needless to say, he’s easily the highlight of the entire movie, which embraces its B-movie exploitation inspirations as much as it can for a tense and often gory thrill ride, though it perhaps could have done with a few more steps in that overall direction, and a lead character who is difficult to entirely sympathise with.

Our proper lead, of course, is the titular Becky (Lulu Wilson), a sullen 13-year-old who’s still mourning the loss of her mother from cancer. To her shock and resentment, her father Jeff (Joel McHale) has brought her to their country home for the weekend where not only are they joined by Jeff’s new lover Kayla (Amanda Brugel) and her young son Ty (Isaiah Rockcliffe), but she learns that Jeff and Kayla are planning to get married. While Becky goes off to mope over this news, the unthinkable happens: a group of escaped convicts, led by neo-Nazi Dominick (James), invade the premises in search of a mysterious key – what it unlocks, and how they intend to use whatever’s inside, is left entirely vague – and Becky decides to go full John Rambo with a hint of Kevin McCallister from Home Alone, by luring the convicts into an increasingly violent set of traps and assaults.

The film comes from directors Jonathan Milott and Cary Murnion, who had previously unleashed a bunch of infected children onto the playground in the horror-comedy Cooties, so they clearly have experience with putting young actors in rather gruesome situations, although this film leans more towards a darker tone than Cooties did, yet the violence is a lot more over-the-top and wince-inducing. There are death scenes in this movie which are straight out of I Spit On Your Grave, and shockingly gory visuals that will, at the very least, make you feel a little uneasy (a loose appendage and some blunt kids’ scissors will have you both cringing and awkwardly chuckling). Milott and Murnion certainly go out as much as they can with their tribute to gory exploitation movies from the 70s, although the small budget they’re working with here does set limits on how much of it they can properly show – that being said, the gore effects are impressive for what they had to go on, even though at times it’s hard to properly see them when parts of it are taking place either at night or in shaky close-up shots.

And then there’s Becky herself, who despite a committed and fierce turn by Lulu Wilson is a character who’s not very easy to like, despite her appearing to be the defunct hero. Before the criminals even turn up, she’s borderline insufferable; a bratty tween of the highest order, she’s always pouting and making her reasonable father’s life a lot more difficult, and when she learns that he’s getting remarried she’s quick to jump down both his and her future step-mother’s throats, because in her mind it’s a betrayal of her late mother. For the second half, when the action really begins, her brutal and somewhat sociopathic tendencies make it look as though she’s having the world’s worst temper tantrum, as she’s stabbing and viciously murdering grown men single-handedly like a stone-cold psycho; it’s concerning when the least likeable people in your movie aren’t the violent escaped criminals, or even the sinister neo-Nazi with a giant swastika on the back of his head.

If the movie had a slightly bigger budget to make some of the gore more palatable, that’s one thing, but the movie would be considerably stronger if the person we’re meant to root for wasn’t as bad, if not worse, than the evil people she’s killing throughout it. That way, all of the gruesome violence would have felt a lot more satisfying, rather than simply par for the course with the nasty tone it has set for itself. It probably sounds like I’m having far too harsh of a go at this movie, because at the end of the day it is pure-grade B-movie exploitation and it does a decent enough job at being that, but I have to at least get some enjoyment out of watching this young girl stab people to death.

When the most enjoyable part of this movie is Kevin James as a neo-Nazi, you know that it hasn’t gone nearly far enough.

Becky maintains a consistently nasty tone throughout this gory tribute to B-movie exploitation flicks, and Kevin James is an intimidating presence as the villainous neo-Nazi he’s wildly cast against-type as, but the movie feels limited by its small budget on how far it can go with its violence, and the titular character isn’t likeable enough to make you want to root for her bloody rampage.