Beauty and the Beast (Review)

Beauty and the Beast (Review) 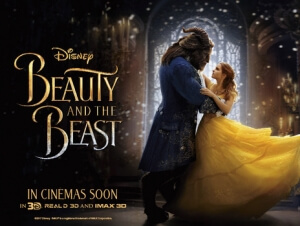 BASICALLY…: A selfish Prince (Stevens) is turned into a horrifying Beast, and must find true love or remain that way forever, which seems impossible until a young woman named Belle (Watson) comes along…

Disney’s current trend of remaking their animated classics into big-budgeted live action films has so far had a mixed response. The Jungle Book was mostly praised, but others like Maleficent and Cinderella had more of a polarising response, and the trend isn’t going away any time soon as new versions of The Lion King, Aladdin, Mulan, Dumbo and many others are currently in development. However, the one that has received perhaps the most backlash from even the most die-hard Disney fans is their newest version of Beauty and the Beast, and for good reason; not only is the 1991 animated film a beloved film by many, to a point where it became the first ever animated film to be nominated for Best Picture at the Oscars, but its themes, characters, songs and especially its story were told in such a perfect way that any attempt to try and re-do any of it would be extremely pointless.

There’s no denying that Beauty and the Beast v.2 has absolutely no reason for existing aside from earning Disney even more money at the box office, but here’s the thing: I didn’t hate this movie, nor did I even dislike it. While I have some reservations about it, I thought they did a solid enough job at bringing this classic film to life, without ever feeling like it had to in any way surpass the original, which it definitely does not.

There’s no point getting into the story, since you all probably know it like the back of your hand by this point. If you don’t, just watch the original animated film; it’s practically the exact same, only with minor additions and a stellar cast that includes Emma Watson as Belle, Dan Stevens as the Beast, Luke Evans as Gaston, and many other great actors including Ewan McGregor, Ian McKellen, Emma Thompson, Kevin Kline, Stanley Tucci and others in the many supporting roles.

That’s basically the crux of everyone else’s hatred of this film, that it’s almost line-for-line the exact same film as before, only delivered slightly differently by its actors or tweaked to fit into these modern times. While I definitely agree that this film relies a bit too heavily on the nostalgia that people have for the original film, here’s the thing: it’s still the same story that first enchanted audiences over 25 years ago, and it remains as strong a story as it’s ever been with characters that still more or less feel like the same ones that debuted all those years ago. “If it ain’t broke, don’t fix it” was clearly the mantra for director Bill Condon and everyone else involved with this movie, and the mild changes they do make are ones that expand on character and backstory, which help to make them a little more interesting. You can absolutely say that there’s no point in even making it in the first place when it was so perfect before, and you’d be right, but for the mandate they had to make this classic animated film into live action, I would personally give them marks for doing a satisfying enough job.

Anyone that goes into this film expecting Beauty and the Beast will get exactly that, but your enjoyment of it will entirely depend on whether or not you can overlook some of its glaring flaws as a complete film. I personally did, but at the same time I understand and respect anyone that really doesn’t, especially when there are one or two new things that don’t entirely work in the rest of the narrative (the addition of an enchanted book is interesting, but is introduced in one scene and then never referenced again), and the same goes for a select few things from the original that are awkwardly done here, like one or two dialogue scenes that are beat for beat the same. Long story short, it’s not a great movie and at times its desire to stick way too closely to the original can occasionally backfire on itself.

But despite everything, I still think this was a gorgeous production of a classic story. The sets are gorgeous, the cinematography is stunning, the music is still as catchy as ever (even the newer songs that original lyricist Alan Menken added specifically for this film), the visual effects are good even if they never match the quality of The Jungle Book, and the acting is perfectly fine from everyone. Watson makes for a decent Belle, and even though her singing voice isn’t the best, it’s still leagues ahead of something like Russell Crowe in Les Miserables; her chemistry with Stevens, who is also decent can be a bit awkward at times, but further down the line they make a nice couple; Evans is having a lot of fun as Gaston and so is Josh Gad as his sidekick LeFou, who in this version is expanded to have more of a character than the original (by the way, that whole gay controversy about his character? It’s only in three seconds at the very end of the movie. Way to overblow something way out of proportion for the umpteenth time, internet); and everyone else does a serviceable job as their own respective characters.

Just to reiterate, this version doesn’t even hold a Lumière to the original animated film. That version will always be superior, and the fact that there is no reason for this new version to exist does stick out like a sore thumb. But for what they were given to do, I felt that this was a passable attempt to just create a new version of the same story. It’s pointless, sure, but it’s charmingly pointless. If you’re still not sold on this one, the original will always be there to back you up; but if you’re in the mood for something familiar but still fairly enjoyable, then by all means be our guest.

Beauty and the Beast is a fairly enjoyable, if completely pointless, remake of the classic Disney animated film that has its merits, from a strong cast to fantastic production values, but will ultimately infuriate hardcore fans of the original with its far-too-heavy reliance on nostalgia for the original, instead of trying to be its own thing.