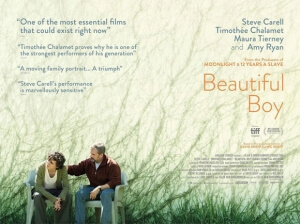 Never before have I seen a young actor slowly reach heartthrob status through the most unconventional of movie appearances. Timothée Chalamet was a virtual unknown before breaking out in a leading role in Luca Guadagnino’s Call Me By Your Name, earning universal praise and even an Academy Award nomination for Best Actor, but while both the movie and Chalamet himself were resoundingly excellent it seemed unlikely that a fanbase would legitimately come to fruition from it. However, thanks to sharing GIFs and posts on sites like Tumblr, the movie – and by extention Chalamet – seemed to get a major boost amongst the young online community, and suddenly the young actor is on talk shows where the audiences are screaming like they’re Leonardo DiCaprio, and filling up red carpet fan pens just to get a glimpse of the guy. It’s incredibly surreal to see an actor like Chalamet reach that status via smaller, independent movies such as Call Me By Your Name, as opposed to franchise fare like Twilight did for its own branch of actors, but he is such a vibrant and likeable talent that I’m also glad he’s been discovered by fangirls in this way.

Chalamet’s almost instant appeal has brought major attention to his next big part in the emotionally wrenching drama Beautiful Boy, with some die-hard fans already calling the Supporting Actor Oscar in his favour based on just seeing him act in the film’s trailers. Having seen the actual movie, however, while Chalamet is truly fantastic here, I don’t think it’s really the sort of film I can see going on to any further awards success; not that I think it’s bad by any means, but it’s also not a particularly focused film with the film’s biggest saving grace being its stellar performances.

Chalamet is Nic Sheff, the eldest son of article writer David Sheff (Steve Carell) who starts to suspect that his boy has started doing hard drugs when he starts going missing for days upon end. David’s fears are confirmed when he discovers that Nic has been taking a large number of narcotics, most recently crystal meth, and he attempts to get his son clean and healthy through various rehabilitation programs which mostly end with Nic relapsing and pursuing other ways to get himself high. We see over the course of a period of time how Nic can way too easily slip from full sobriety to complete junkie mode, which has his father and his extended family worrying about his own health and feeling powerless to stop him before it’s too late.

Emotionally, it’s a devastating watch, especially for anyone who has gone through the notions of addiction or has known someone going through all of that. A large part of what makes it so are the incredibly powerful performances by both Chalamet and Carell, the latter of whom is continuously showing he’s just as fantastic a dramatic performer as he is a comedic one, and here you can just feel the absolute anguish that he is going through, as someone who wants desperately to try and help his son but keeps discovering that there’s really not a whole lot he can actually do. Chalamet, meanwhile, completely knocks it out of the park with a very realistic portrayal of drug addiction that’s as heartbreaking as it is stunningly accurate; you can see his chemically-induced paranoia and anxiety etched all across his face, which isn’t an easy task for an actor to take on when portraying a hardcore junkie on-screen, but he makes it look so effortless and with much of his natural charm intact even when his character is at his lowest. Outstanding in their own ways, too, are Maura Tierney and Amy Ryan as David’s second wife and Nic’s biological mother respectively, but this is primarily a two-man showcase for Carell and Chalamet, who are both utterly fantastic in ways they have never been before.

However, whereas the movie benefits greatly from these excellent performances, it cripples itself with a somewhat unfocused narrative. For the most part it feels linear, but every so often there will be sudden flashbacks or flash-forwards to moments in these characters’ lives before and after the event being depicted on the screen, which can throw off some people that are trying to focus on what is actually happening. Often, it can become difficult to tell when some parts are actually taking place, which is strange because this film was co-written by Luke Davies who also wrote Lion which had a very linear narrative that kept its focus firmly in place; I’m not as familiar with director and co-writer Felix Van Groeningen or his Oscar-nominated previous film The Broken Circle Breakdown, so I wonder if the oddly choppy editing choices came more from him as they seem to be more of a filmmaking style choice than a writer’s one. Either way, it was something that ultimately didn’t leave me as invested as I really should have been, because this is a powerful (and true) story of drug addiction that features two incredibly moving central performances, yet there was way too much of the choppiness in this structure that kept throwing me off every single time.

The best way I can describe Beautiful Boy is that it is very much an actor’s film; the performances really do elevate the material which otherwise suffers from an unfocused narrative that prevents it from being truly unmissable. I really did want to recommend this movie more than just that, but while I think it is very emotionally portrayed, not to mention extremely well-acted, it ultimately comes up short in its goals of being an essential movie about drug addiction.

Beautiful Boy is an emotionally devastating portrayal of drug addiction that is well and truly elevated by two fantastic lead performances by Steve Carell and Timothée Chalamet, but the film is crippled by an unfocused and rather choppy narrative that hinders its impact from being truly unmissable.