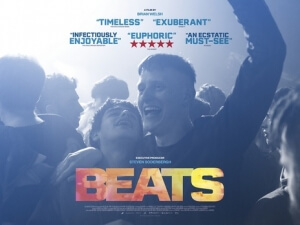 BASICALLY…: In 1994, two young friends (Macdonald and Ortega) head to an illegal rave for one last night together before they go their separate ways…

In 1994, the UK government introduced the Criminal Justice and Public Order Act, which introduced several changes to the law, most notably – and most controversially – the restriction of public raves in response to the disastrous handling of the Castlemorton Common Festival a couple of years prior. For young people, it was seen as a disgrace, as they felt their right to party was being taken away by mere bigwigs who had never been to a party in their lives, and in response they did what they did best: threw massive parties as one great big middle-finger to the authorities.

Beats, the latest film from Brian Welsh – better known for TV outings such as the Black Mirror episode The Entire History of You – celebrates this era of teen rebellion by throwing its own party, complete with fun, joy, and most of all some thumping tunes all neatly wrapped up in one little package.

Set in Scotland during the summer of 1994, Spanner (Lorn Macdonald) and Johnno (Cristian Ortega) are two teenage friends from very different backgrounds; Johnno is a bit more middle-class, about to move with his family and step-father Billy (Ryan Fletcher) to a more affluent part of the country; meanwhile, Spanner comes from a family known for its criminal history, including his abusive older brother Fido (Neil Leiper). Johnno’s parents actively discourage their son from hanging out with Spanner for those reasons, but that doesn’t stop Spanner from convincing his friend to accompany him on one last night out together, to a secret illegal rave designed as a pure act of rebellion against the new incoming laws. Along the way, they encounter girls, drugs and thugs, but they do their best to not let anything ruin their last night together.

It’s easy to make the comparisons to Trainspotting, which also came out around the time that this movie is set, but that’s largely due to the fact that both take place in Scotland and therefore feature heavy accents that are amusingly hard to understand for anyone living outside of the United Kingdom. However, this is a considerably more light-hearted movie than Trainspotting – Beats doesn’t feature cot death or disturbing usage of hard drugs, mercifully – as the primary focus is on the relationship between these two boys, and how their wildly differing personalities and backgrounds don’t really matter in the end because they still have each other’s back when all is said and done. Spanner is rambunctious and energetic, certainly, but he’s no hooligan, unlike the monsters he’s forced to live with; he’s also quite resourceful and clearly cares about his friend, especially since Johnno’s the one true friend he’s got in this world, and thanks to fresh actor Lorn Macdonald’s sympathetic performance you feel his frustrations with how his life has panned out so far, from being subject to rough violence from his family to being labelled as scum just because he happens to come from this particular family. On the opposite end of the spectrum, Johnno is a lot more reserved and shy than his best friend, clearly uncomfortable with a lot of the stuff he’s witnessing – at one point, the boys encounter a girl who’s clearly being abused by her drug-dealer boyfriend, and all he can do is uncandidly ask what happened to her bruised eye – but is so drawn by Spanner’s magnetism that he’s uncharacteristically willing to step out of his comfort zone, if only because his connection to seemingly his only friend is so strong and seductive. Society deems that, on all accounts, these two boys shouldn’t be friends, but in the spirit of the film’s tribute to youthful rebellion their friendship is a total “screw you” to what people think, and their friendship offers a great deal of heart and loyalty that really drives this film all the way to the end of the road.

It goes without saying, but a movie that’s primarily about dancing to rave music has a pretty great soundtrack; the rhythms are electrifying, enough to where you want to stand up in the cinema and dance along yourself, and used sparingly enough so that when they do show up it always feels like an event for your ears. Director Welsh also incorporates the music into its visuals with an effective eye for visuals; the film is predominantly shown in black-and-white, but during the scene’s rave scenes you finally start to see colours seep in, as though the music is so powerful that it’s finally bringing this world to beautiful – and even surreal, as you get to experience a series of abstract images as the beats go on and on – life at long last. It’s an exciting reality to witness, because the characters are so likeable and the situations so entertaining that you’re having as much fun as they are by just sitting there watching it all unfold; it doesn’t come across as false or even that pandering, as Welsh and everyone else who worked on this film clearly have an understanding of how it must have felt to be a youth in this time period, and have done their best to replicate their feelings for a newer, more modern audience that might not have the same appreciation for this era of music as they obviously do.

The most surprising thing about this movie is that it’s supposedly based on a play, and thinking about it that makes sense; there are numerous scenes of characters just sitting around talking with each other, and sometimes you can picture these exact moments unfolding on a stage. How, if at all, a stage production could replicate the purely cinematic joy that comes from scenes of living it up on the dance floor to some awesome tunes is entirely lost on me, as right now I can’t imagine a more glorious experience of youth culture than the one being projected onto a large screen for my viewing pleasure.

Beats is a vibrant and enthralling tribute to youth culture and rebellion in the mid-90s, with a central friendship that’s made genuinely sweet thanks to the likeable characters and actors playing them, and a thumping soundtrack fuelled with engaging dance anthems that will make you want to move your body along to it in the quiet auditorium you’re seeing it in.

Check out Beats showtimes in London
on Walloh.