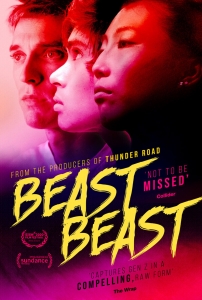 BASICALLY…: Two high school students (Chen and Angeles) find themselves on a collision course with their gun-toting neighbour (Madden)…

As ever, gun violence continues to be a heavily politicised topic in America. By now, you’re probably well aware of the arguments on both sides – conservatives see gun control as a threat to the Second Amendment, while progressives want stricter guidelines to prevent unstable people from owning and fatally using assault rifles – but no matter what side you fall under, there’s no denying that the emotional fallout from deaths caused by firearms and the people wielding them is utterly devastating. This is what Beast Beast, a tightknit indie drama from debut writer-director Danny Madden, ultimately hones in on and forces you to experience with all of its horrors, without completely descending into schlocky after-school special territory.

The film, based on a short film that Madden had previously made, follows three young characters whose stories eventually link up with each other; there’s Krista (Shirley Chen), a high school drama kid who’s chirpy, well-liked and firmly committed to her art; then we have Nito (Jose Angeles), a new arrival at the high school who’s a talented skateboarder that starts hanging out with some older delinquents that frequently commit small misdemeanours around town; and finally, there’s Adam (Will Madden, brother of the director), a recent graduate and Krista’s next-door neighbour who is attempting to become a YouTube star by making tutorial videos about his collection of guns.

It’s like there are three separate coming-of-age movies happening at the same time; with Krista, you have an artsy tale about this happy-go-lucky Gen-Z girl that’s way into her theatrics, while Nito is going through his Mid90s-esque gritty realist piece with drink and drugs, and finally Adam is central in his own cautionary tale by way of social satire about this incel whose life and lack of consequences eerily remind viewers of the reprehensible actions committed by figures such as George Zimmerman and Kyle Rittenhouse.

Needless to say, with a set-up like that and the themes it is clearly trying to convey, this isn’t going to end well for at least one of these young main characters. However, part of the fascination surrounding Danny Madden’s breezy direction and naturalist screenplay is how they actively work to keep you fully invested in each of these three protagonists, while also gently hinting toward a very tragic conclusion that you can feel in the back of your mind is going to happen at any given moment. The three arcs mentioned above do blend together almost seamlessly, driven by confident and inviting performances from each of our young leads (Shirley Chen is a delightful find, as is Jose Angeles who brings a good level of charm to his wide-eyed turn, while Will Madden is often intimidating with his blank, sunken-in eyes), and the filmmaker’s evident desire to utilise what little budget he can scrape together to craft a film with sensual cinematography, rapid-fire editing and a strong grasp on some of its darker, more topical themes.

In addition to the sensationalism surrounding gun violence, class very much plays into the core strand of topics found in Beast Beast, as does the notion of racial divide; it doesn’t feel like a coincidence that the two more innocent main characters are of Asian and Hispanic heritage, who respectively live in humble abodes and rundown apartment blocks, while the gun-toting third wheel is an all-white American lad from an affluent, presumably conservative family in a predominantly Caucasian neighbourhood. Madden’s script and direction does sometimes make it perhaps too obvious about what he wants to say here, with some slow-motion shots of youthful euphoria and disturbing aftermaths that are a little on-the-nose, especially given recent events in the news, but because it donates a fair chunk of its time to its characters and their main motives, it does let you in on what they may be thinking when placed in extreme circumstances, and how because of their status they are either mere victims of the system or privileged sods that could literally get away with murder.

Though it perhaps doesn’t have as much subtlety as it occasionally thinks it may have, Beast Beast does ultimately serve as a strong, well-crafted coming-of-age saga spread across three lives, all of whom are interesting enough to keep you hooked until the final confrontation (which, for a film that prefers to bathe itself in realism, can come across as a bit too conveniently wrapped up), and makes a formidable calling card for its central filmmaker, who certainly has a vision and, with time, can surely put it to more effective use than it already is.

Beast Beast is a well-crafted coming-of-age drama that neatly ties together three concurrent storylines with strong writing and direction by Danny Madden, who blends together some alluring central performances and topical themes which, while not always subtle, are done well enough to justify their presence.

Beast Beast is now available to rent or buy on digital platforms, including Amazon Prime Video.