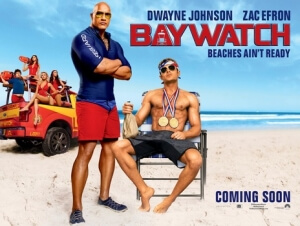 BASICALLY…: Mitch Buchannon (Johnson), the lead lifeguard of the Baywatch team, butts heads with a new recruit, former athlete Matt Brody (Efron), only for them to team up to stop a criminal syndicate…

So far in 2017, we’ve had two raunchy comedies that have been based on popular 70s/80s TV shows, both of which feel designed to cynically try and cash in on the popularity of 21 Jump Street, and both are also not very good, failing to doing anything clever or even that funny with their respective source material.

One of them is also infinitely worse than the other, in terms of being more insufferable, more unfunny, and just plain aggravating to sit though due to its sheer incompetence as a piece of filmmaking. The other one is Baywatch.

Yes, while director Seth Gordon’s riff on the classic cheese-fest of a show known to many as Baywatch certainly is a terrible movie, it’s not as painful a viewing experience as CHiPS, which featured a scene where the action stopped dead to let Dax Shepard and Michael Peña have a back-and-forth conversation about rim-jobs. Sure, there are loads of cheap sex and bodily function gags in this film as well, but Baywatch succeeds in having far more charm and charisma in their delivery, regardless of the material, whereas in CHiPS it was all so obnoxious you just wanted to suffocate yourself to make it end.

A lot of that comes down to the involvement of two very charismatic and hugely talented comedic stars like Dwayne Johnson and Zac Efron, who even when saddled with lacklustre material make the most out of it because they are just so darn likable. Johnson takes on the David Hasselhoff role as Mitch Buchannon, the head lifeguard at the local beach of the Baywatch community, while Efron is Matt Brody, a former Olympic swimmer whose public fall from grace has resorted to him trying out for a role as a new lifeguard. The rest of the plot sees them and their team, made up of Alexandra Daddario’s Summer, Jon Bass’ chubby loser Robbie, Kelly Rohrbach as C.J. Parker (the role that brought Pamela Anderson worldwide fame), and the other one – and that’s not me being cruel, her character really leaves such little impact that I don’t even know her name or the name of the actress playing her – investigate a drug-smuggling syndicate within their community, and delivering as many foul-mouthed insults at each other as the 15 certificate will allow them.

Of course it’s a pretty dumb plot, but then again the show was pretty damn dumb as well, which is something that this film tries to embrace as much as possible with the unapologetically over-the-top silliness of everything from its jokes to the action. However, it just doesn’t amount to anything that’s really funny; the film somehow manages to be both ambitious and unambitious at the same time, setting itself up to be this grand epic sand-covered comedy, but then settling into a more mundane espionage plot that’s been done many times over. The jokes heavily reflect that, as a lot of them have an ambitious set-up but a less than satisfying payoff; take for instance an early gag about Bass’ Robbie getting his nether regions stuck in a pile of deckchairs, which again has an amusing lead-in but ends up going on for so long that the joke wears thin fast. A lot of the film feels padded with these kind of jokes, which would probably explain its bloated length of just under two hours, and sadly not many of them are funny or clever enough to distract the audience from its sheer lack of brain cells.

However, it still manages to get across a good sense of charm in its failings, which is more than can be said for CHiPS, which brings us right back to Dwayne Johnson and Zac Efron. Both of them have played these sorts of roles in the past, particularly Efron who nowadays always seems to be the go-to guy to star in a high-concept adult raunchy comedy like this, but they’re so damn good at it that you really don’t care about the typecasting, since they sell every lame joke with such passion and grace that it’s hard not to be won over by these performers. Both of them give it their all here, which is honestly more than the film deserves, but the admirable effort to make this into a legitimately enjoyable experience, even if they don’t quite succeed, is one that you have to give them huge credit for. In fact, a lot of the other cast members are really trying, with nearly none of them sleepwalking through this material like Johnny Depp in Pirates of the Caribbean: Salazar’s Revenge, and some of them come off as charming in their own way; Kelly Rohrbach and Jon Bass have some legitimately sweet chemistry together, while lead villain Priyanka Chopra is having fun vamping it up as much as the script and direction allows her. So, to them and the other fine members of this cast, I have to give them mad props for doing their utmost to make this work.

But at the end of the day, it still doesn’t fully work; technically, it’s a rather rubbish movie with quite a large chunk of lame jokes and crude gross-out gags, with a plot that makes no sense and CG effects that look bad even for a silly comedy like this. However, if you had a choice between watching this and CHiPS, and the only other option was to swallow an entire vat of acid, at least give Baywatch a try before you commit to chugging that acid down. It’s not good, but you’ll at least have your life and sanity by the end of it.

Baywatch coasts exclusively on the charming appeal of its actors, especially the ever-lovable Dwayne Johnson and Zac Efron, but not enough to disguise the fact that it’s an uproariously crude and lame raunchy comedy with very few jokes that land and a main plot that’s as stupid as the source material… although at the end of the day, at least it’s not CHiPS.