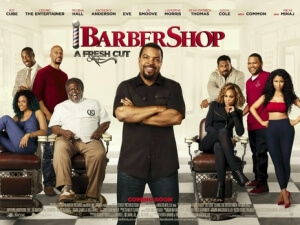 BASICALLY…: Calvin (Cube) and his friends must try and save both their barbershop and their neighbourhood from succumbing to gang violence…

Sometimes, the best way to combat the heaviest of topics is to come at it with a sense of humour, because what would we be if we couldn’t even bring ourselves to laugh at the situation?

This is exactly what Barbershop: A Fresh Cut manages to do when talking about the pressing issue of gang violence, miraculously avoiding the pitfalls of it feeling and acting like a corny after-school special (mostly, anyway) and bringing a lot of heart, thought and – yes – comedy to something otherwise pretty serious.

The third in the Barbershop film series (or fourth, if you count the spin-off Beauty Shop) sees main protagonist Calvin (Ice Cube) and his co-workers and friends who all work at the newly-unisex Chicahgo-based Calvin’s Barbershop being faced with the issue at several points during their long and chatty work days, from narrowly avoiding in-store fights between two opposing gang members to the increasingly likely scenario that Calvin’s son Jalen (Michael Rainey Jr.) is being groomed for a future within one of the gangs. On top of a dozen other sub-plots going on at the same time, such as married man Rashad (Common) being courted by flirtatious co-worker Draya (Nicki Minaj), Calvin and his friends decide to spring into action in order for the neighbourhood to stay safe.

Any other comedy that tackles the issue of gang violence head-on would probably have a difficult time balancing the seriousness of the topic with the fact that it also needs to make people laugh, but this film is smart enough to keep the two of them separate as much as possible, with much of the comedy coming from the back-and-forth dialogue that the employees have with one another instead of pointing and laughing at an actual incident of street tension. Their conversations, aside from being genuinely funny, also tackle other issues like casual racism and sexist double standards in ways that are both natural and smart, and it really feels like they’re actually just talking about these things as opposed to only saying them because that’s what’s in the script. This probably makes Barbershop: A Fresh Cut surprisingly one of the smarter comedies out there at the moment, because not only does it handle such serious topics with a strong sense of humour, but it also doesn’t ignore the fact that they are indeed serious and worth bringing up in any kind of conversation.

Even when it does put all of its focus into more serious scenes addressing the topic in a more straightforward manner, it’s still effective because you’re really with these characters and wanting them to work their way around the situation. The mini-arc of Calvin discovering his son is starting to embrace gang culture, even finding paraphernalia in his bedroom, is effective as it introduces the fear that any parent would have of their young child embedding themselves into an extremely dangerous environment, and shows Calvin going to extremes such as considering buying new space in a safer part of Chicago in order to protect his offspring from being hurt, imprisoned, or worse. Calvin is a likable guy, and to see him go through this family drama and this particular situation raises our concerns, as well as bring into question what any father like him would do to keep their child from harm, even if it can seem extreme.

Everyone else does a fine job at bringing both the comedy and the drama to the situation, with standouts including Deon Cole as the ever-expressive Dante, who could honestly make an entire movie out of him just reacting to stuff and we would still laugh, J.B. Smoove who shows up as a smooth-talking entrepreneurial businessman, and even Minaj manages to be perfectly fine in a role that’s not just stunt casting (though to be fair, this is Nicki Minaj we’re talking about, and it soon becomes very obvious she wasn’t cast necessarily for her acting abilities). It’s a good ensemble, with everyone carrying their weight and managing to shine without letting the overshadowing seriousness cast a gloom of darkness over them.

Out of all the unnecessary sequels we’ve been getting lately, Barbershop: A Fresh Cut may be one of the few ones we actually never knew we wanted, or even needed, and that’s no bad thing at all.

Barbershop: A Fresh Cut manages to bring the laughter in a smart and natural way via a strong ensemble cast where even Nicki Minaj manages to impress, and it also handles the otherwise serious topic of gang violence in a surprisingly thoughtful and intelligent way that makes it one of the stronger comedy sequels in a while.