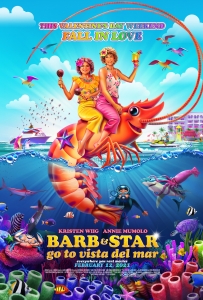 BASICALLY…: Lifelong friends Barb (Mumolo) and Star (Wiig) go on holiday to a Florida resort, where they are drawn into a deadly plot…

A comedy like Barb and Star Go to Vista Del Mar seems to come around once every few years – specifically, a comedy that goes all out with its extremely strange sense of humour and never looks back. Think back to more recent examples like Zoolander, or Anchorman, or Hot Rod, or even last year’s Netflix hit Eurovision Song Contest: The Story of Fire Saga; all of those share the same kind of bonkers, anything-goes attitude towards its comedy, and they work because the gags are not only weird, as well as weirdly funny, but there will be a unique charm to how they are presented and performed, which make them all the funnier.

With Barb and Star Go to Vista Del Mar, written by its two lead stars Annie Mumolo and Kristen Wiig, there is so much oddness to unpack that it might just be one of the weirdest of these types of comedies to surface in some time, and yet at the same time it’s kind of irresistible knowing how strange and, indeed, funny it gets.

It’s a film that perhaps plays best if you go into it knowing as little as you can, so consider this a fair warning that from hereon out there will be (very mild) spoilers which may go into detail about certain plot elements that were wisely left out of the film’s characteristically odd marketing campaign.

Still here? Well, the first thing you should know is that, on top of the main plot about two Midwestern middle-aged best friends Barb (Mumolo) and Star (Wiig) going on a holiday to the titular Florida resort, there’s also a massive villain plot straight out of a Roger Moore Bond movie, where an evil white-skinned supervillain named – according to the subtitles – Dr. Lady (also played by Wiig), with henchmen that consist of a young newspaper delivery boy named Yoyo (Reyn Doi), and Jamie Dornan as a lovestruck man named Edgar, plans to unleash a horde of deadly mosquitos on the resort and kill everybody. Now this isn’t a huge spoiler, because it’s unveiled before we even meet our titular heroines, but not knowing beforehand that stuff like this actually happens here honestly left me both bewildered and morbidly curious – just WHERE is the movie going to go from here?

As it turns out, Barb and Star Go to Vista Del Mar goes to a lot of places, some of them unexpected, a few others rather sweet, and all of them silly as hell. Honestly, in what other film this year will you find big musical numbers, mice orchestras, talking crabs with the voice of Morgan Freeman, Damon Wayans Jr. as an incompetent spy, pianists singing jaunty tunes about boobs, and throbbing dance remixes of Celine Dion’s “My Heart Will Go On” all in the same place? I’d be shocked if any other film that comes out over the next ten months has even one of those things.

Such is the absurdist approach that writers and stars Mumolo and Wiig have taken with their film, which needless to say is a far cry from their Oscar-nominated script for Bridesmaids, which admittedly was a much deeper and even funnier movie than this. However, respect where it’s due to this duo who have truly decided to just run with their oddball sense of humour, seemingly without a care in the world because on-screen they are so in sync with one another that their overlapping rambling, despite occasionally outstaying its welcome, feels like it comes straight from the heart. The film’s director is credited as Josh Greenbaum – predominantly a documentary and TV director here making his narrative feature debut – but Barb and Star Go to Vista Del Mar is really Mumolo and Wiig’s love-child through and through, playing along like it’s the forgotten adaptation of a long-lost SNL sketch cooked up by the both of them during Wiig’s time on the show.

But unlike some of the actual movies based on SNL skits, this one contains some genuine laughs throughout, especially with how far the surreal humour can stretch towards some off-kilter sight gags and choice dialogue. Both Mumolo and Wiig are natural comedic performers which of course they flaunt relentlessly in a pair of heightened but still likeable turns, and while an actor like Jamie Dornan doesn’t quite fit in an exaggerated, over-the-top comedic universe like this one where just about anything can happen, he is at least trying to make himself feel comfortable, especially when he’s front and centre to a couple of the film’s most out-there sequences. Not every gag lands, but the ones that do are made funnier by the sheer dedication that these actors are putting into some of these absolutely ridiculous scenarios; there are a couple of backstories which get more and more insane as they go along, which are so odd that you have no choice but to laugh at how overblown they are.

While the movie is fascinating purely for its weirdness alone, the real question is: does Barb and Star Go to Vista Del Mar strange enough to warrant a potential future cult film status? I honestly believe that it will happen, on top of it also being a pure Marmite movie: some will love it for its absurdity, others will hate it for that same reason, but no matter what it’s going to have its fans who may even start organising one of those quote-a-longs they often show at the Prince Charles Cinema in London (missing you, by the way!). The film definitely has that cult classic vibe going for it, but doesn’t feel like it’s cynically aiming for that and is instead revelling in its own eccentric self while being funny and inviting on its own terms.

At the risk of sounding like a broken record, Barb and Star Go to Vista Del Mar is extremely weird – but, thankfully, a fun kind of weird.

Barb and Star Go to Vista Del Mar is an irresistibly weird absurdist comedy that respectfully goes all-out with its anything-goes sense of humour, and has a few decent laughs to go alongside the daffy lead turns by writers Annie Mumolo and Kristen Wiig, and while not all the gags land it has enough for the makings of a future cult classic.

Barb and Star Go to Vista Del Mar is out now to rent on digital platforms, including Amazon Prime Video.