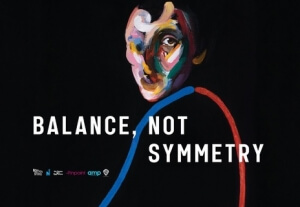 BASICALLY…: An art student (Harrier) contemplates her life and friends in the wake of a personal tragedy…

Jamie Adams is a filmmaker who I’ve come across a lot recently when researching any and all upcoming films; since his breakout pic Black Mountain Poets back in 2015, he seems to have made not one, not two, not even three, but FOUR movies in the span of one or two years, with most if not all of them actually getting released this year (you might have seen previews for his films Songbird and Wild Honey Pie! on this site not that long ago) with at least one more still to come. He is certainly a busy bee, but from what I hear the quality of his films – which are largely improvised by his actors from a thin script almost usually provided by Adams – tends to vary, with some critics pointing out how meandering and unfocused his stories tend to be due to their fill-in-the-blank nature.

After seeing his latest film Balance, Not Symmetry, I can kind of see where they’re coming from.

The film is about Caitlin (Laura Harrier), a young American student at a prestigious art college in Glasgow, who we first meet as she and her mother (Kate Dickie) are burying her father after he unexpectedly passes away. Despite her grief, and her mother’s blatant depression creeping in, she returns to the college to work on her end-of-year project, and to have fun with her best friend Hannah (The Florida Project’s Bria Vinaite). As she struggles to find her artistic voice, Caitlin begins acting out to help cope with her loss, driving a wedge between her and Hannah as well as her creative ambitions.

Though there is technically a plot, it kind of comes and goes with the film feeling more like a collection of scenes loosely strung together than anything else, with occasional drama that is very quickly resolved, and characters which don’t exactly spring to life on paper. The only reason you feel any emotions for these people is because the actors, to their credit, do the best that they can to give them any sense of life, particularly Bria Vinaite who has a very natural charisma to her which, with a better script (as we’ve seen her work with in The Florida Project), could genuinely work as a compelling lead character. However, not even committed emotional performances can save these characters from being blank slates, with Harrier’s Caitlin in particular proving to be all that sympathetic as she constantly treats people like dirt when they fail to satisfy her needs and wants, all under the guise of mourning for her father’s death. Adams doesn’t signify any character development because these people feel almost entirely the same by the end as they were when we first meet them, and he doesn’t seem to give the movie any weight to it as any drama is miniscule or tossed to the side so that the movie can promote its soundtrack instead.

Said soundtrack is provided by Scottish band Biffy Clyro, whose frontman Simon Neil is also credited as a writer – to what extent I have no idea, seeing how most of this film feels as improvised as many of Adams’ other features – and whose songs frequently pop up in many scenes. The film has largely been advertised as a Biffy Clyro collaboration, with the film even getting special screenings across the country (one of which was at my local cinema, hence why there’s a review for this film) that featured a set of the band’s songs immediately following the movie; I left as soon as the credits started rolling, so I can’t comment on how that set actually was, but I really don’t need to have seen it since the whole movie was essentially a musical set. The band’s songs dominate every corner of the film, with their alt-rock anthems blasting over scenes of drama and even some of the more quieter moments, which end up being distracting when the scene really should have just let itself play out without the need for music. It leaves you wondering if this is was originally intended to be a visual album for the band, but Adams got a bit carried away and decided to just go ahead and make a whole film out of the thin resources he had; it certainly has that vibe to it, and seeing how the band’s songs have more presence to them than any of the characters or story elements, it would not surprise me in the least if this actually turned out to be the case.

Overall, it feels like nothing was really accomplished with this film. Characters don’t change all that much over the course of it, the plot dilly-dallies from one aimless scene to the next, and whenever there is something of actual dramatic weight going on it’s very quickly dropped so that it can go right back to being about very little. Other films have gotten away with not having a whole lot of plot or even character, but there has to be something else to keep the audience engaged or interested, and there really isn’t much of that in this film; the characters aren’t interesting, the plot has little focus, the drama isn’t all that engaging, and above all there’s no reason to care about any of it. The film can throw in as much music by Biffy Clyro as it wants, and have good actors like Bria Vinaite and Kate Dickie trying their damnedest to deliver strong emotional performances, but their efforts – as admirable as they are – aren’t enough to make the film feel in any way interesting or engaging.

This is the first of Adams’ films that I’ve seen, after only hearing mixed things about his work from other people, and already I can understand why there aren’t many people who are on board with his meandering, aimless line of work. It’s nothing if not good-intentioned, but a movie like this needs far more than good intentions to actually pass as an interesting film.

Balance, Not Symmetry tries to mine some meaningful drama in its heavy themes of grief and depression, but its meandering and aimless nature, as well as a heavy focus on its soundtrack by Biffy Clyro, handicaps it from being engaging or even interesting.

Check out Balance, Not Symmetry showtimes in London
via