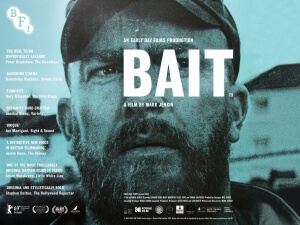 BASICALLY…: A Cornish fisherman’s (Rowe) anger begins to boil over when his brother (King) beings using his boat for tourist trips…

Whenever you see a movie nowadays that tries to replicate old black-and-white footage from around the 50s or 60s, it’s usually done in a more digitalised manner because the technology they used back then is all but obsolete, and nobody is going to go out of their way to use old equipment for a production that’s far advanced than it was more than half a century ago.

Nobody, that is, except for Mark Jenkin; the Cornish filmmaker has done something quite extraordinary in today’s technologically-advanced world and instinctively gone back to basics to make his latest film, Bait. For the entire shoot, he solely used a 1976 16mm clockwork Bolex camera, a device first developed and used as far back as 1925, and processed about 13,000ft of film reels by hand during editing. Not only that, but because the device was unable to record sound, he had to recreate the entire soundtrack from scratch, including bringing his actors into an ADR recording booth to redo the dialogue, and relying heavily on the sound editors and mixers to replicate all sorts of sound effects from the sound of footsteps to the not-so-gentle breeze on the beach.

It’s a gimmick, sure, but it’s a mightily impressive one, especially in this day and age where we rely so much on digital production that we tend to forget that the earlier filmmakers started out with the most ancient of equipment. Beyond this selling point, though, Bait is a truly fascinating film, full of anger and provocation that feels authentic and even timeless.

Set in an unnamed coastal town in Cornwall, fisherman Martin (Edward Rowe) is frustrated for a variety of reasons. For one, his brother Steven (Giles King) has effectively taken control of their father’s vessel, using it for tourist trips out to the coast, leaving Martin to rely on catching fish in the harbour and close to the beach in order to make his living. As if that wasn’t enough, the London tourists have begun flooding into the town for their summer holidays, with their snobbery and self-satisfaction greatly irritating Martin to no end, leading him and other members of the community to actively voice their disdain for the gentrification of their authentic Cornish town. It’s not until tragedy strikes much later in the film, however, that Martin’s frustrations are put into perspective.

It’s a very sombre movie, with the stark black-and-white cinematography (also by Jenkin) dealing heavily in uncomfortable close-ups of faces and nearby objects to create a feeling of extreme unease. The more you feel the main character’s anger brewing inside of him, the tighter and more intense both the shots and the editing become, with imagery that borders on surreal as well as rapid-fire cutting in between separate scenes, and you can only watch as things threaten to reach a point to where he cannot contain himself any longer. At any moment, you feel like this guy could snap and brutally assault someone (or worse), and it is due to the strength of both Edward Rowe’s understated performance and Jenkin’s tightknit filmmaking skills that you both feel his frustrations as well as understand them. It is one of those films where you do have to wait a considerable amount of time before things properly get moving, but once it does and it doubles down on the rather bleak imagery that’s sometimes surreal enough to come from a David Lynch or even an Ingmar Bergman film, it rewards your patience with a compelling yet small story about family and community.

The style is what most people will be talking about with this film, and for good reason; it is stunningly crafted, as it genuinely looks and feels like a long-lost movie from the mid-20th century (until you start seeing modern Macbooks and mobile phones pop up in the foreground, which admittedly does take you aback just a little). Jenkin should be applauded for bringing back to the conversation this method of filmmaking, which never really left but is so often neglected by the vast majority of filmmakers nowadays that it might as well have done, and how he captures such visceral and haunting images here without the inclusion of any visual effects to speak of is exactly why it needs to be studied as much as some of the more modern digital technology by today’s film students. The hand-made approach to some of the film stock is also a nice touch, with some frames appearing grainier than others (revealed in the director Q&A following the screening I was at to be pollen that had somehow gotten into the editing suite) and sometimes you’ll get shots where the next scene will transparently appear over the previous one, all of which makes it look unpolished and rustic, but in a very good way.

Jenkin plants numerous moments of dark humour throughout the drama – Martin, shocked with what the posh London holiday makers have done with the radical redesign of his family home, remarks that it now “looks like a sex dungeon” – but the overall feeling here is one of boiling frustration, making it a ticking time bomb of a movie that could very well go off at any moment. It’s made all the more tense by, again, just the stunningly level of retro filmmaking that Jenkin gleefully plays around with here, ensuring that it succeeds not just on a technical and stylistic level, but also an emotional and artistically pleasing one. It certainly won’t be for everyone, and I can see a lot of people being turned off by the film’s style alone, but it’s a sharp reminder that what may be old doesn’t mean it can’t feel new once again.

Bait is a stunningly made drama that takes full advantage of its retro 16mm Bolex camerawork, which makes it look and feel like a long-lost film from the mid-20th century, but leaves enough room for the intense drama to swim around in.

Check out Bait showtimes in London
on Walloh.