Bad Trip (Review) – Funnier Than You May Think It Is 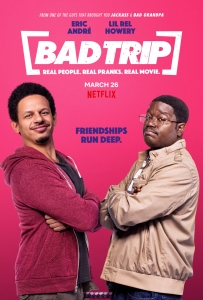 With two Oscar nominations for Borat Subsequent Moviefilm: Delivery of Prodigious Bribe to American Regime for Make Benefit Once Glorious Nation of Kazakhstan (and yes, I will always use the full title of that film until the day I die), along with the news that a new Jackass film is scheduled for release later this year, Netflix’s Bad Trip – sold to the streamer after theatrical plans were cancelled due to COVID-19 – comes right when people seem to be getting interested in hidden-camera comedies again.

This one comes courtesy of Eric André, the surrealist comedian best known for his Adult Swim talk show parody The Eric André Show, and who co-writes, produces and stars in this film which – as with other hidden-camera comedies – puts unsuspecting members of the public right in the middle of their shocking pranks. Their unfiltered, unrehearsed reactions are always among the best parts of one of these movies, and Bad Trip is no exception, though the film does have a number of decent laughs to go along with its silly, simple premise.

We start the action in Florida, where local loser Chris (André) is shocked to bump into his high school crush Maria (Michaela Conlin), who now runs an art gallery in New York. Eager to tell Maria his true feelings, Chris convinces his best friend Bud (Lil Rel Howery) to drive all the way up to New York for a road trip along the East Coast, where of course they get in a bunch of wild situations. However, they are also being pursued by Bud’s sister Trina (Tiffany Haddish), who’s just escaped from prison and is more than a little pissed that her brother has used her beloved pink mobile to make their trip in; she too interacts with real people who react with shock and awe at her rowdy and destructive behaviour.

It’s kind of a miracle that the filmmakers actually managed to get away with filming out in the open with unsuspecting civilians, because the likes of Eric André, Lil Rel Howery and especially Tiffany Haddish are somewhat prolific and easily recognisable performers who don’t act any less like their normal comedic personas, and for the most part aren’t even in any heavy make-up to make themselves look less detectable. I imagine that at some point during filming, at least one or two people may have realised that’s the break-out star of Girls Trip yelling at them on the streets, or the best friend from Get Out keeping his drunk buddy under control at a country bar. Those moments, as far as I’m aware, aren’t in the movie, so I’m led to assume that they remained incognito at all times; if that’s true, then props to them because they stay firmly committed to their characters all throughout, and when the time is right they get some pretty funny natural reactions out of some of their horrified onlookers, who also deserve credit for allowing the filmmakers to use their priceless faces in the movie.

At its core, Bad Trip is a very straightforward buddy road trip movie, where the main attraction – other than the hidden-camera aspect – is the crazy amount of public stunts that these actors put themselves through, from public nudity to falling off the tops of bars to hanging off the edge of rooftops. Many of these gags land reasonably fine, with the biggest laughter once again coming from the genuine looks of horror and disgust from those not in the know, but both Eric André and Lil Rel Howery do have a likeable on-screen chemistry that just about carries the film. Not every prank scene gives off the right reaction – one set in a local zoo with a gorilla (really a guy in a costume, not that anyone else in the scene can tell the difference) perhaps goes way too far in its attempts at shock value – and for a while it does settle on a repetitive formula of delivering the prank and then zooming in on the surprised faces of passers-by. It’s worth it, though, for hilariously blasé reactions to giant musical numbers that spring out of nowhere in nearby malls, and Tiffany Haddish pulling the door off of a police cruiser in front of an entire donut shop.

Honestly, Bad Trip was a modicum funnier than I honestly thought it would be, because while I do like these lead actors they do often tend to be stuck in some pretty low-brow comedies, and from the looks of the trailer it definitely looked like this was just going to be another one of them. However, while the movie definitely contains its fair share of low-brow humour – after all, any comedy where the two main guys get their super-stretchy penises stuck in a Chinese finger-trap is never going to be considered high art – the rest of the movie I was seriously not having that much of a problem with. I’d say it’s worth watching if you want to watch something reasonably funny in the same way that the Jackass movies are funny, and if you’re like me and not so keen on the trailer, give it a chance – you might end up being as surprised as the people in this movie.

Bad Trip manages to pack some decent laughs into its hidden-camera shenanigans, which a very game cast of actors manages to commit to in order to prank some hilariously shocked passers-by.