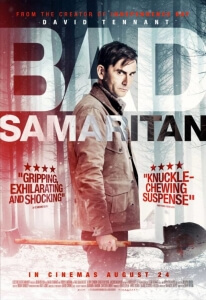 BASICALLY…: A thief (Sheehan) finds a disturbing discovery in the house of wealthy patron Cale Erendreich (Tennant), and soon finds himself targeted by the rich sadist…

Just like with Scott Speer, the director behind the gobsmackingly awful Status Update and the cheesy but far more competent Midnight Sun, there seem to be two Dean Devlins in existence.

One of them is the director of Geostorm, a disaster movie so brain-bead and nonsensical it makes the films of Roland Emmerich – for whom he was once a producer – look like intelligent masterpieces by comparison; the other is the guy who made Bad Samaritan, a much more taut, sophisticated, suspenseful, and emotionally engaging thriller with incredibly strong lead performances, a solid script and one hell of an entertaining pay-off.

It baffles me that the man who sent Gerard Butler up into space to fix a weather machine and uncover a terrorist plot to use said machine to control the weather across the globe, could also be capable of making something that’s actually smart and enjoyable, but these are bizarre times and stuff like that is completely within the realm of possibility at this point.

Bad Samaritan stars Robert Sheehan (who also appeared in Devlin’s Geostorm) as a young man named Sean, an aspiring photographer who makes his living as a restaurant valet, and along with his friend Derek (Carlito Olivero) uses his job to burgle the houses of the people whose cars he is entrusted to park. One night, he thinks he’s struck gold when he robs the house of the wealthy Cale Erendreich (David Tennant), until he discovers a woman (Kerry Condon) chained up and gagged inside the house. Unable to free her there and then, Sean tries alerting the police to Cale’s crime, but the rich patron is always one step ahead of him, and Cale soon begins making Sean’s life a living hell in all sorts of sadistic ways.

The big selling point for this movie, especially here in the UK, is obviously the fact that it’s David Tennant who’s playing the psychotic serial killer, and it should come as no surprise to anyone familiar with the actor’s incredible talents – whether in shows like Doctor Who and Jessica Jones, or various stage productions of Shakespeare plays – that he is an absolute blast in this movie. Channelling Patrick Bateman from American Psycho with a little nod to Terry O’Quinn’s memorable turn in The Stepfather here and there, Tennant goes full psychopath in ways that are incredibly frightening and at times even funny (intentionally so), and while it does take a little while to get used to him speaking in his American accent here, he never sacrifices any of that intensity he brings to the role which makes him a real villain of a character who you can’t wait to see get his comeuppance, if at all. Robert Sheehan also deserves a hell of a lot of credit too as the hero of the piece, as he makes for a very competent and likeable lead that you’re always rooting for and understanding of the steps he decides to take in order to get justice. The things that Tennant does in order to make life just miserable for this poor guy, whether it’s hacking into his Facebook profile and publically dumping his girlfriend before sending a nude pic of her around, or having his parents lose their jobs after being framed for various crimes (and that’s not even half of the things this guy does to him), just make you want to see Sheehan win the day all the more, in this increasingly intense cat-and-mouse thriller where nobody is safe and nothing is off limits.

Devlin, with this film, shows that he can craft a film that contains a fair amount of suspense and intrigue, and can also respect the audience’s intelligence whilst working with a focused and sensible script, in this case one that’s written by Brandon Boyce. It’s a fine script that allows the characters to have moments which allow you to sympathise with them and understand what they’re going through emotionally, and in the case of Tennant’s villain really makes you fear this guy without him ever coming across as an evil caricature or underwritten psychopath; the movie is filled with tons of little character moments that instantly put it above some of the far lesser movies of this particular genre, such as the small inflictions of grief and despair that Sheehan pulls off in what is once again a very strong hero performance, and I appreciate how Boyce seemed to have favoured these vital moments of humanity whilst writing this, but more importantly how Devlin picked up on that whilst making it into a film. As far as direction goes, Devlin handles everything perfectly well, even though I’m noticing between this and Geostorm that he doesn’t have a particular style that sets himself apart from any other director working today, which can at times seem a little bland but the film is well-shot enough and paced steadily enough that his lack of style really doesn’t damage the film in any way.

There are certainly a few moments that fall apart once you begin to apply real-world logic to the situation, but this isn’t necessarily a movie that’s worried about seeming too realistic; at its heart, the film is pure entertainment, and it delivers on that and more thanks to a stronger-than-expected script, competent direction, and two great lead performances that make for one of the stronger hero-villain combos so far in a movie this year. I’m really glad I was able to see this film in a cinema because I would not have bothered to check it out otherwise, and I hope more people do end up seeing it because it’s a nice little surprise of a film that is more than just David Tennant being scary in front of the camera.

Bad Samaritan is a very entertaining cat-and-mouse thriller that benefits greatly from the performances of David Tennant as the film’s frightening villain and Robert Sheehan as the capable and likeable lead, but also from a script that favours character moments over most things, and competent direction by Dean Devlin who shows he actually can craft a reasonably smart film after the dunce-fest that was Geostorm.