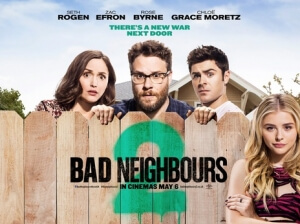 BASICALLY…: When a female sorority moves in next-door, Mac and Kelly (Rogen and Byrne) call upon the help of their former enemy Teddy (Efron) to help put the girls in check…

As you may recall, we put Bad Neighbours as our second-worst film of 2014 (it just lost out to Annie), since we remembered it to be one of the most obnoxious and foul-tasting experiences we had in a cinema all year. However, upon a re-watch of the film very recently, we are prepared to admit that maybe we were a little too hard on it the first time round; while we still don’t think it’s a particularly great movie, nor is it as funny as some make it out to be, it did get a few chuckles out of us every now and then, and it also managed to sneak in a few moments of effective satire that we just didn’t pick up from previous viewings (though we still stand by our opinion that it can get way too obnoxious at certain parts, and that some of the humour can feel a little forced).

The sequel, released two years after the original became a surprise sleeper hit at the box office, is very similar to its predecessor, in that you can get almost the same consensus as before, and also in that it is virtually the same movie with only a handful of differences here and there.

It’s been a couple of years since thirty-something parents Mac (Seth Rogen) and Kelly (Rose Byrne) engaged in an all-out war with their next-door fraternity headed by Teddy (Zac Efron), and now with their young daughter Stella getting older and another baby on the way, they’re looking to finally move out and start a new life. Things, of course, get complicated when hard-partying freshman Shelby (Chloë Grace Moretz) decides to open a sorority – you guessed it – right next door to Mac and Kelly, and when things start to get out of control they call upon the help of Teddy to stop their partying so they can sell their house and move on. Hijinks, as you may predict, ensue.

You may have predicted that because, when you start to analyse it, it is almost a carbon copy of the original, only with a couple of plot beats moved around and a few new additions. The set-up is the same – college kids declaring war on their neighbours – the characters are the same – any real development from most of the principals during the last movie seems to have reverted back to how they were before, particularly Mac and Kelly who, despite being a little more responsible, are still just as obnoxious as when we last saw them – and even the jokes are, for the most part, exactly the same as before – like the last film, it opens with a sex scene that soon goes into awkward territory, there are acts of juvenile and even dangerous behaviour from the antagonistic college kids, Teddy is reprimanded for being a dunderhead with tight abs, lots and lots of improv that goes on forever etc. Sometimes what they’ve added that’s new, such as a sequence set at a college event, still possess similar beats and structures to things from the last one, and though they try to move things forward at every opportunity in terms of story and character, nothing can really prevent it from feeling like a pure re-tread of the first film, and a creatively bankrupt one at that. It’s not quite as much a rehash as The Hangover Part 2 was, but it’s still a rehash nonetheless.

We will give it credit, however, that we didn’t find it quite as aggressively obnoxious as the last one, which suggests that a much smarter movie lays underneath the surface than the execution would let on. The topic of campus sexism is brought up more than once, instigated when it is revealed how female sororities are not given the same rights to throw massive parties like male fraternities can, and furthered when characters are horrified by the degrading treatment of young women at massive frat raves. It’s a topical subject, one that certainly needs to be explored more in popular culture, but the film doesn’t focus on it enough to make it stick, instead spending all that time and energy in just being a repeat of Bad Neighbours only with girls instead of boys. Same goes for a subplot involving Teddy’s friend Pete (a returning Dave Franco) who, aside from being reasonably successful at his new post-graduate job, has also come out as gay and is engaged to his male partner, none of which is treated with homophobic humiliation and is instead welcomed thoroughly by Teddy and other characters, and if the film maybe also focused more on that angle (which, again, it sadly doesn’t) it could have been something a little more special.

You’ll basically get virtually the same product as before, just shipped in a box that’s not all that different to the one before; everything from the plot to the character arcs to the jokes are all but entirely recycled here, with none of them being any better than before but also no more lame than before either. It’s exactly what you’ll expect to see, which – depending on whether you liked the original or not – is something of a slight disappointment that it misses the opportunity to do things any better than what came before. Instead, like before you’re just paying to see Seth Rogen, Zac Efron et al do their stuff without much furthering of quality, which in turn just makes Bad Neighbours 2 yet another comedy sequel that fails to live up to its potential.

But at least it’s a better raunchy Zac Efron comedy than Dirty Grandpa. So THAT’S something, we guess.

Bad Neighbours 2 is nothing more than a recycled version of its predecessor, with many of the plot beats and even jokes remaining all but the same, and though there are a few moments that hint at a much smarter movie underneath all the juvenile humour, they’re not enough to overall save this pointless mostly laugh-free follow-up.