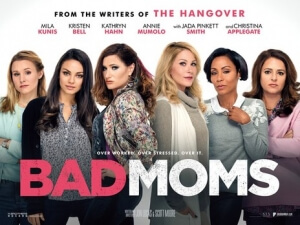 BASICALLY…: Fed up with their stressful lives, put-upon mothers Amy (Kunis), Kiki (Bell) and Carla (Hahn) decide to have a little bit of fun…

Do trailers just have a hard time trying to sell comedies with female-heavy casts? Trailers to films like Sisters and especially Ghostbusters were so badly put together that they made the otherwise-decent films look like unfunny, shrill comedies with an alarming lack of actual jokes.

Bad Moms nearly met the same fate, with its own trailers resembling not so much a wholly decent comedy with women in leading roles, but more like a shrill attempt to recapture the magic of the Hangover films (not least because it was written and directed by the first film’s writers Jon Lucas and Scott Moore).  And once again, like Sisters and Ghostbusters before it, this one is way better than the advertising lets on.

The film is a funny and surprisingly heartfelt look at the lives of a group of stressed-out mothers, particularly Amy (Mila Kunis) who decides one day that she’s had enough of the imposing requirements set by modern parenting. Along with timid and out-going mother Kiki (Kristen Bell) and oversexed single mother Carla (Kathryn Hahn), Amy takes a more laid-back approach to parenting that allows herself and her new friends more quality time for themselves. This irks the stuck-up and bullying PTA president Gwendolyn (Christina Applegate) to no end, and she vows to destroy her through any means necessary, especially when Amy’s methods quickly make her a more popular figure amongst the other mothers.

So, Bad Moms isn’t necessarily about a group of mothers who decide to go completely bad and end up neglecting or endangering their children, like an ACTUAL bad mother; it’s more about just letting loose and not conforming to what society tells you to do, approaching it in whatever way makes you feel the most comfortable, in this case parenting. It’s made clear early on that the draconian and imposing regulations that Gwendolyn and her mini-army of fellow snobbish parents, among them Jada Pinkett Smith and Annie Mumolo, is actually doing more harm than good to not just the overworked parents but also the children, who are acting overstressed and entitled as a result of their every whim being attended to. It’s little wonder why any mother, let alone Amy and her friends, decide to buck the trend and do things their own way, and for most part the film does show both the pros and cons of being able to do that.

However, the concept isn’t explored quite enough and isn’t mined for all its comedic possibilities, which is a shame because some of the stuff they were able to dig up for this movie actually works very well. The lead actresses are great together, and they’re funny both as a unit and on their own terms as well (Kathryn Hahn is a major highlight), and there are lots of moments that really work in making the audience laugh, such as a slo-mo supermarket stampede to Icona Pop’s “I Love It”. Next to some of the other raunchy comedies we’ve gotten this year, it’s leagues above Dirty Grandpa and Mike and Dave Need Wedding Dates in terms of actual laughter and enjoyment. But like we said, although it’s an interesting set-up which could lend itself some rather biting suburban satire in this overly-sensitive era of parenting, it isn’t looked into as much as it could be, and it can be left feeling a little empty in its substance. A sappy third act hones this point right into the ground, which definitely feels manipulative with some aggressively depressing music, even when you don’t entirely agree with the reasons why these characters are feeling this way.

Luckily, there are enough laughs in the film to justify at least one sitting, and it’s a way more enjoyable raunchy comedy than any of the others we just listed. Most of all, however, it’s a rather touching love letter to mothers in general and how hard they work to make sure their children grow up with the right resources while also remembering to be good people as well. An ending credits montage sees the female cast as themselves alongside their real-life mothers, and it manages to be more loving, more sweet-natured and more rewarding then the entirety of Mother’s Day. You can tell that Jon Lucas and Scott Moore really love their own mums as well, and now they’ve made a reasonably enjoyable and funny raunchy comedy for them to have a good old giggle at. Now, THAT’S a real gift from the heart.

Bad Moms may not entirely seize the opportunities for comedy as it should, but it’s funny enough and even heartfelt enough to pass as a wholly decent raunchy comedy that will definitely keep you entertained.