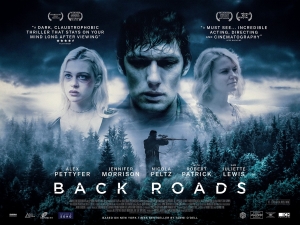 BASICALLY…: When his mother (Lewis) is imprisoned, Harley (Pettyfer) is tasked with looking after his three younger sisters…

For his directorial debut, Alex Pettyfer has taken on some very ambitious source material. Tawni O’Dell’s novel Back Roads is a hard-hitting dramatic tale of family dysfunction, abuse and psychological torment, with some very disturbing reveals that just about anybody would have a difficult time trying to swallow, and Pettyfer, to his credit, does not shy away from how bleak and moody the story and its characters are.

And yet, there’s something about it which doesn’t feel right. Watching the movie, it seems like it’s less a genuine tale of morose family matters, and more like a vanity project for someone who thinks they have what it takes to handle such delicate subject matter, when in reality they just wanted to show off their dramatic chops. Unfortunately for Pettyfer, the gamble doesn’t pay off, because it’s too dull to care about and nowhere near as thought-provoking or important as it thinks it is.

Pettyfer plays the lead role of Harley, a young man forced to care for his younger sisters after their mother (Juliette Lewis) is imprisoned for killing their abusive father. Harley laments his new position as legal guardian, especially when his sisters prove to be rather difficult to care for; eldest Amber (Nicola Peltz) is unruly and frequently sleeps around with countless guys, Misty (Chiara Aurelia) is emotionally distant, and youngest Jody (Hala Finley) has dialogue and delivery that’s straight out of a Full House-style sitcom. His only source of positivity comes in the form of Callie (Jennifer Morrison), an older and lonely wife and mother with whom he embarks on a passionate physical affair with, but as Harley’s demons start bubbling up to the surface everything he holds dear is threatened.

Even though there is technically a plot, the film never seems to truly start. So much of the film is dedicated to the main character going through episodic encounters at home, with his love interest at his job at a local supermarket, and with his therapist, and yet it wasn’t until about halfway through when I realised I didn’t even know what this movie was trying to be about. A large percentage of that is due to how, really, I just didn’t care; the story moves along at such a slow pace that it becomes frustrating after a short while, because again you are just waiting for something interesting to happen and it never really does, and by the time some of the more shocking revelations come pouring out, it’s too late since you’re long past the point of being invested in any of it.

On that same note, very few of the characters deserve any real sympathy, despite the horrific stuff they’ve been written to have gone through, and none less so than the main character himself; Harley is mostly a blank slate in this movie, a wet blanket who pooh-poohs almost everything his younger sisters get themselves involved in – at one point, he catches Amber having sex on the couch, and he swiftly responds by dragging it outside and then setting it on fire – and at several points comes across as a forceful and domineering person to the woman he is supposedly in love with, showing up to her house at numerous inconvenient moments whenever he wants to get laid. Despite his backstory, which unfolds piece by piece as we move along, it’s hard to feel bad for this guy because most of the time he acts like a stone-cold psychopath, and honestly it’s largely down to Pettyfer’s bland and wooden performance that we can’t get any other kind of read on him; for a guy who clearly went into this with such a strong desire to make it that he also decided to direct the film, he acts like he’d rather be anywhere else a lot of the time. He doesn’t really have any screen presence or any chemistry with his co-stars or even a sense of charisma, and I realise that in a film as bleak as this, you don’t really want the lead to be a Dwayne Johnson-like charmer, but you have to at least be drawn in by the character and how he is around certain people, and you never pick up on any reason as to why we should like or even care about this guy, who’s mostly just monotone and withdrawn for the majority of the movie. By the time he actually shows any emotion, once again it’s way past the point where we should care, because up until then we were forced to watch a film about someone who really isn’t that interesting of a character, and certainly isn’t elevated by any kind of stellar performance.

It all just feels like an exercise for Pettyfer to put himself in centre stage and try to gain the audience’s sympathy as he systematically reveals one horrendous piece of backstory after another. It doesn’t work as well as it thinks it does, because it’s too dull to care about and the lead character and performance is not worth the investment; there are so many other plot threads and characters who are far more captivating and engaging (Juliette Lewis as the incarcerated mother, for example, is the best part of the movie in the small handful of scenes she’s in), yet Pettyfer wants us to instead focus on this one uninteresting guy because he’s the director and the driving force behind this movie. I’m not sure if another director and/or lead actor would have necessarily saved the dull script, but at least Back Roads wouldn’t feel quite as much of a vanity project instead of the hard-hitting domestic drama it could have been.

Back Roads is a self-indulgent exercise for director/star Alex Pettyfer to show audiences his dramatic side, but the script is too dull to get fully invested in, with an unlikeable and uninteresting protagonist who Pettyfer fails to bring to life in a bland, monotonous performance, and direction which feels about as lost as the audience’s overall interest.

Want to decide what the movie’s like for yourself?
Check out Back Roads streaming links
via